Antwerpen Kathedraal is largest Gothic church in the Netherlands but four Rubens altar paintings and other art are often the main draw. 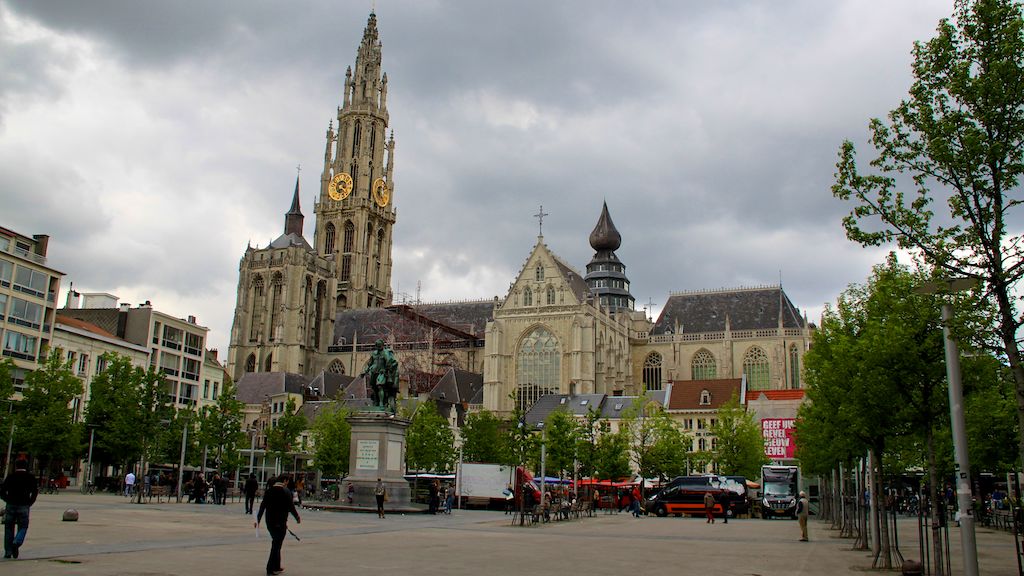 The Cathedral of Our Lady (Onze-Lieve-Vrouwekathedraal) in Antwerp is the largest Gothic building in the Dutch-speaking world. Its single belfry is the tallest church tower in Belgium and on the UNESCO World Cultural Heritage list. While the exterior is authentic Gothic, much of the interior is 19th-century neo-Gothic. However, the main attraction for many visitors is the mostly Baroque art – foremost four works by local artist Peter Paul Rubens including two magnificent large altars featuring the raising of the cross and the descent from the cross. Admission is charged to enter the church.

The Gothic Antwerp Cathedral in Belgium

The Onze-Lieve-Vrouwekathedraal in Antwerpen (Cathedral of Our (Dear) Lady in Antwerp/ Cathédrale Notre Dame d’Anvers – is the largest Gothic church with the tallest spire in the Netherlands.

The Gothic Antwerp Cathedral was built between 1352 and 1521 to replace an older Romanesque church. The choir was completed in 1415, the nave in 1487 and the transepts by 1495. Work continued on the various towers until 1521.

The flamboyant Gothic north tower was completed in 1518. It is inscribed on the UNESCO World Cultural Heritage list together with the local stadhuis, the nearby Mechlin St Rumbold’s Cathedral and over 50 further belfries in Belgium and France.  The carillon in the belfry has 49 bells. 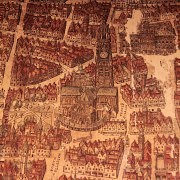 The south tower was never completed. In part, due to plans to significantly enlarge the cathedral, which would have necessitated the south tower to be moved. A start was made with this enlargement – complete with a corner stone by Holy Roman Emperor Charles V – starting again from the choir. This uncompleted new choir can be seen on older paintings and street plans including the Vergilius Bononiensis Antwerp map (1565), which is displayed in the Museum Plantin-Moretus. Even on modern street maps, the planned extension would have filled the space up to the alleys at the eastern end of the choir.

However, a major fire in 1533 diverted resources toward repairing rather than extending the church. After that, Antwerp had lost its position as the largest and richest city in Europe north of the Alps. Despite Antwerp’s golden cultural age that lasted well into the 17th century, financial resources of the scale needed to build a super-sized church would never again be available.

Somewhat surprisingly, the odd onion dome topping the transept crossing is from the 16th century and was thus added at the time of repairing the church after the fire. The effect of this unusual construction with several windows is particularly visible inside the church.

Jef Lambeaux made the four figures at the southwestern corner of the cathedral in 1906. They honor the builders, especially Peeter Appelmans, who was the main architect of the church. (Lambeaux also made the Brabo Fountain on Grote Markt.)

The Measurements of the Antwerp Cathedral

The exterior measurements of the Antwerp Cathedral are as follows: 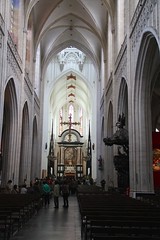 The Interior of The Antwerp Cathedral 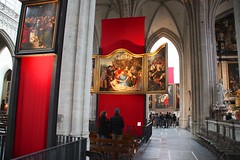 The interior of Antwerp Cathedral is a mixture of styles from the Gothic to the modern. Very little of the Gothic interior – other than the pure architecture – is original. Most decorations looking Gothic are from the 19th-century. The Renaissance, Baroque and Rococo elements are mostly from the period, although many art works were later brought to the cathedral from other churches.

Through the centuries, the interior of Antwerp Cathedral suffered from fires, wars, plundering, iconoclasm and pure theft. The fire of 1533 took care of most of the original interior while the beeldenstorm (iconoclastic fury) during the Reformation and the re-conquest of Antwerp by the Spanish destroyed much of the subsequent replacements. Napoleon stole the Rubens altars – but they returned. A thorough 19th century makeover left most of the interior as neo-Gothic but much of the art is older.

The interior of Antwerp Cathedral is well worth the admission fee to see the art and the magnificent architecture. Visitors receive a free pamphlet describing the main works but more detailed guidebooks are available in the church bookshop.

The four paintings by local artist Peter Paul Rubens (1577-1640) are often the main draw for visitors to Antwerp Cathedral. These works include the painting above the main altar, two large triptych altars, and a smaller altar painted for a private tomb.

Antwerp was past its economic peak by the early 17th century but it still experienced an artistic golden age at the start of the Baroque, which played a major role in the Counterreformation in the city, as it did in many parts of Europe.

The Assumption of the Virgin

Bearing history in mind, it is good to start with the youngest Rubens painting – the Assumption of the Virgin (1626) hanging in the choir above the main altar. The protestants, and Dutch protestants in particular, were against church art to start off with but a theme such as the assumption of the Virgin – a story not in the Christian Bible but popular with Roman Catholics – is enough to get any protestant’s back up.

This large painting – it measures 490 by 325 cm – was commissioned for the church and partly painted on site. It is frequently praised for Rubens skillful use of colors as well as for the composition’s dynamic movement.

The Raising of the Cross

The Raising of the Cross (also known as The Elevation of the Cross) is the oldest and biggest painting by Rubens currently inside Antwerp Cathedral. Rubens painted this triptych measuring 460 x 340 cm with two side panels of 460 x 150 cm each in 1609-10 for the main altar of the St Walburgis Church in Antwerp. This church has since been destroyed with the Ruben altar inside the cathedral since 1816. It is currently in the north transept (left of the choir when facing forward).

Rubens painted this altar upon his return to Antwerp after nearly a decade in Italy – it shows clearly how his contact with Italian masters influenced his paintings henceforth. The central panel shows no fewer than nine executioners raising the cross on which Christ is to be executed – a theme previously rarely covered in art. The side panels show John and Mary with mourning women and the Roman commander directing the execution.

The Descent from the Cross 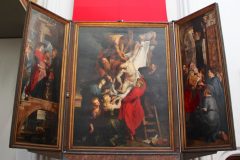 The Descent from the Cross painted by Rubens in 1611-14 is usually considered artistically the most accomplished work by him in the Cathedral. It is more classical than The Elevation of the Cross and considered a paragon of the Baroque genre.

He painted this triptych – measuring 421 x 311 cm with two side panels of 421 x 153 cm – for the Arquebusier Guild (civic military guard). (At the time of the guilds, Antwerp Cathedral had around 50 permanent altars.)

The harquebusiers had St Christopher as patron saint. As he famously carried Christ – as painted on the rear of the altar – the front three pictures also involve Christ being carried. The central panel has Christ being taken from the Cross by eight figures. On the left side panel, an expecting Mary visits her cousin Elizabeth, who is expecting the later John the Baptist. On the right panel, Mary hands the infant Jesus over to the high priest Simeon. 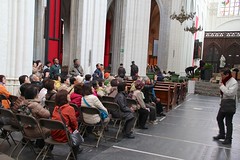 These two altars by Peter Paul Rubens largely account for the large number of Japanese visitors to Antwerp Cathedral. These Rubens altars play an important role in A Dog of Flanders – a 19th-century book by Ouida. The story became hugely popular in Japan through manga, television and films. In the novel – a boy and his dog freeze to death in front of the altar but content to have seen the masterpieces. Most recordings of the story, especially in the USA, use a happier ending but in Japan, the original resonates well.  (The novella, which is little known in Belgium outside the tourist industry, is free at Project Gutenberg.)

The Resurrection of Christ

The fourth Rubens work in Antwerp Cathedral is much smaller but biblically speaking of a much more important event – The Resurrection of Christ. This triptych measures 138 x 98 cm with two side panels 136 x 40 cm each in 1611/12 for the tomb of the married couple Jan Moretus (1543-1610) and Martina Plantin (d. 1616) from the family of printing fame – see the nearby Museum Plantin Moretus.

The central panel shows Christ emerging alive from his tomb to the shock of the Roman soldiers. The side panels features John the Baptist and St Martina – the patron saints of the Plantin-Moretus couple.

Further Art Dedicated to the Virgin in Antwerp Cathedral 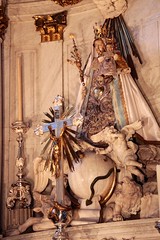 In addition to the Rubens masterpieces, the interior of Antwerp Cathedral has many further art works on display.

Antwerp Cathedral, as the city itself, is dedicated to the mother of Christ and the Virgin Mary thus features in many works inside the church. Some notable works in addition to the Rubens main altarpiece include: 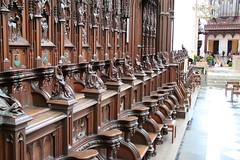 Antwerp Cathedral has an amazing collection of wood carved items. The largest are the mid-19th-century monumental choir stalls. However, the older works are even more impressive.

The oak pulpit by Michiel van der Voort (1667-1737) was originally made for the St Bernard Abbey in Hemiksem but has been in the cathedral since 1804. It is said that the rich carving has more meaning than most sermons.

At the rear of the church against the northern wall is a collection of confessionals with 24 life size sculptures. These have the same heritage as the pulpit and were probably made by Michiel van der Voort and Guillielmus Ignatios Kerricx (1682-1745). 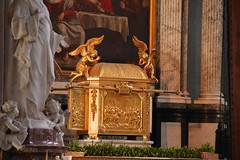 Antwerp Cathedral has two organs – at the rear of the nave is the main Schyven organ (1891) with 4 keyboards, 90 registers and 5,770 pipes. More impressive, when the music isn’t playing, is the carved baroque case with sculptures from 1657. A second Metzler organ (1993) is in a modern swallow nest in the transept at the crossing.

In the Sacrament Chapel is a large gilt wooden tabernacle (200 x 132 x 85 cm) from the Rococo period. It is in the form of the Ark of the Covenant with the main structure designed by the sculptor Hendrik France Verbugghen (1654-1724).

Although a working Roman Catholic church, Antwerp Cathedral is owned and maintained by the state. An admission fee is charged of €6 per person, free for children under 12-year old. Travelers objecting to paying for admission to a church should visit the nearby town Mechelen where masterpieces by Rubens and other artists can be seen for free in several churches.