In the Deutschland 2012 Hotel and Restaurants Red Guide Michelin increased the number of star restaurants in Germany to 249 and vastly expanded the list of Bib Gourmand restaurants. 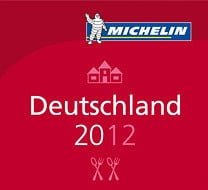 Germany continues to sport nine three-star restaurants in the Michelin Deutschland 2012 red guide, second only to France in the number of three-star restaurants per European country. “La Vie” (Thomas Bühner) in Osnabrück was elevated to Michelin’s highest category, while “Gourmetrestaurant Lerbach” in Bergisch-Gladbach was demoted to the two-star category.

Berlin is finally gourmet food capital of Germany with ten one-star restaurants, followed by Munich (München) with nine, Stuttgart with eight, Hamburg with seven, Düsseldorf and Frankfurt am Main with six, and Cologne (Köln)with five one-star restaurants. “Margaux” in Berlin has been identified as one of four rising stars with the possibility of a second star in the near future.

The Michelin 2012 Deutschland red guide also saw an increase in the cheaper but good Bib Hotels and Bib Gourmand restaurants categories. Of the 4,227 hotels described in the Germany 2012 guide, 218 were awarded with the Bib Hotel (“Good accommodation at moderate price”) while 219 was considered particularly pleasant establishments for its particular comfort category.

The number of Bib Gourmands (“good food at moderate price”) increased by 45 restaurants to 431 in Germany, with 78 new awards (and 33 deletions). For Germany, Bib Gourmand restaurants must serve a high-quality three-course meal for cheaper than €35.

Michelin’s 2012 red guide for Germany is a hefty 1,440 pages thick and describes well over 6,000 hotels and restaurants. The hotel and restaurant reviews are in German only but non-German speakers can rely on pictograms and introduction remarks in several languages.

The official retail price of €29.95 is respected by Amazon Germany

advertise cheaper prices but only available from December 2011 or January 2012. In all cases, the actual red guide will be in German.

An iPhone and iPad version of the Michelin Germany 2012 hotels and restaurants red guide will only be available from March 2012.