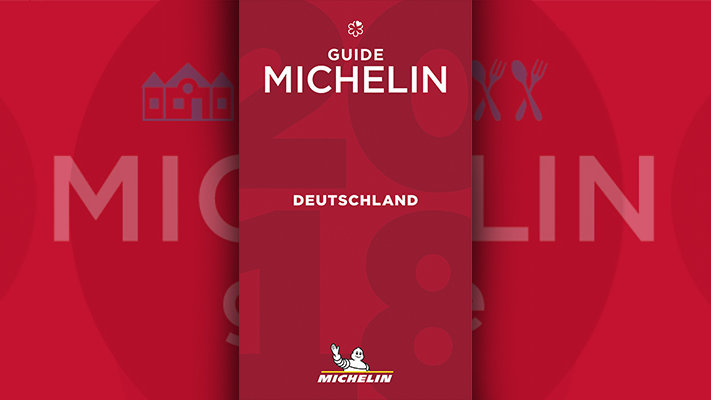 The Michelin Guide Deutschland 2018 for the first time features 300 star restaurants in Germany. The famous Red Guide describes 1,777 German hotels and 2,232 restaurants but as usual the star and bib-gourmand restaurant reviews attract the most attention. For the Germany 2018 Red Guide, Michelin increased the number of German three-star restaurants to 11 with the addition of Atelier in Munich, while 39 restaurants now have two stars and a record 250 a single star. The number of Bib Gourmand restaurants serving gourmet food at lower prices increased to 460 with 33 new additions. Berlin is the German city with the highest number of quality restaurants but Baden-Württemberg remains the state of choice for German gourmets. The Guide Michelin Deutschland 2018 is written in German and retails for around €30 from Amazon DE or $30 from Amazon.

Michelin awarded a new three-star distinction in its Germany 2018 Red Guide to Jan Hartwig of „Atelier“ in the Bayerischen Hof in Munich that held two stars since 2016. This again increased the number of Michelin three-star restaurants in Germany to 11 – already for many years the second highest number in Europe after France.

With Atelier added to the top of Michelin’s restaurant rankings, Munich is only the second major city in Germany with a three-star restaurant. The other is The Table Kevin Fehling in Hamburg.

As before, the small town Baiersbronn in the Black Forest remains Germany’s gourmet capital with two Michelin three-star restaurants (Bareiss and Schwarzwaldstube) and a two-star restaurant (Schlossberg).

The number of Michelin two-star restaurants in Germany 2018 remains unchanged at 39, as Atelier moved up to three and three restaurants lost their two stars: Brenners Park-Restaurant in Baden-Baden, Tiger Gourmetrestaurant in Frankfurt, and Villa Rotschild Kempinski in Königstein im Taunus.

For the first time ever, two vegetarian restaurants in Germany had a single Michelin star. Seven Swans in Frankfurt am Main maintained its one star while Cookies Cream in Berlin received its first star this year.

The Bib Gourmand is awarded by Michelin to restaurants serving a carefully prepared quality meal at a reasonable price. For the Michelin Germany 2018 red guide this price is up to €37 for a three course meal.

The Michelin Germany 2018 Hotels and Restaurants Red Guide is 1,100 pages thick and recommends 1,777 hotels and 2,232 restaurants in all price and comfort classes.

Although Baden-Württemberg easily remains the German federal state with the largest number of Michelin star restaurants, its dominance has been declining in recent years – mostly through the improvement of quality food in other parts of Germany. The wider geographic spreading of stars is also at least partly due to Michelin placing less emphasis on traditional classical French cuisine.

Berlin with 21 Michelin-star restaurants has the largest number of gourmet awarded restaurants of any city in Germany. This number increased dramatically in recent years and reflects the continued gentrification of large parts of the city. Hamburg, Munich, Stuttgart, Cologne and Düsseldorf also have a wide choice of gourmet restaurants.

The Guide Michelin Deutschland 2018 is written in German and is available for around €30 from Amazon DE or $30 from Amazon.

Germany has a wealth of restaurant guides with alternative to Michelin including Gault & Millau and Der Feinschmecker.