The Novotel Bologna Feria is a comfortable, modern hotel with swimming pool at the fairgrounds in the outskirts of town. Family rooms can sleep up to four. 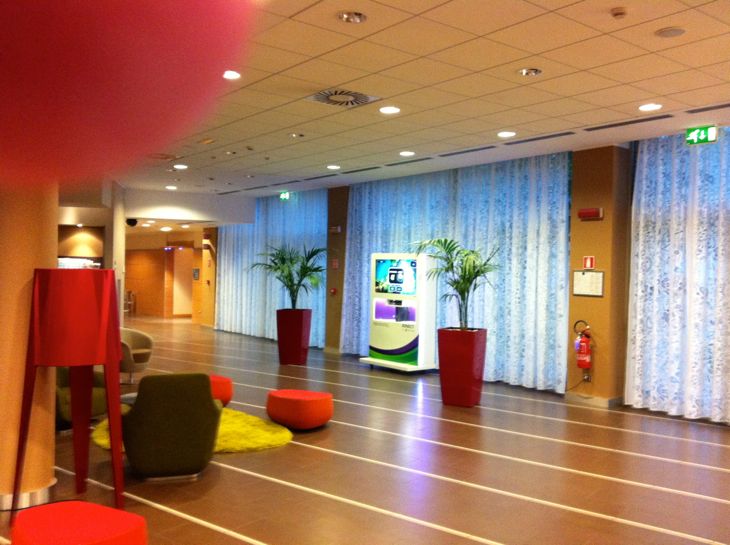 The Novotel Bologna Feria is a modern midscale hotel next to the highway and fairgrounds towards the north of Bologna. The hotel clearly aims at business travelers and show visitors, which results in super bargain prices for families and leisure travelers during quiet periods, including most holidays. The family bedrooms can sleep four in comfort. A bus stops nearby en route to Bologna’s historic town center. Ample parking is available with very easy access to the highway. 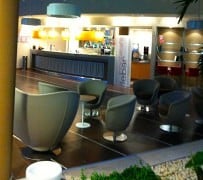 The Novotel Bologna Feria is a typical European business hotel with the emphasis on modern facilities and comfort rather than character. Although the hotel mostly aims at business travelers, especially visitors to the adjacent huge exhibition center, families and leisure travelers can find excellent bargains during non-show periods and during most holidays and long weekends.

The Novotel Bologna Feria has recently been refurbished and thus has all the characteristics of other newer hotels in this Accor chain. The lobby area is modern and airy while bedrooms also have the current light wood design.

Guest can use iMacs with Internet connections and printers for free in the lobby. A few toys and Xbox Kinect with motion sensors entertain children. An outdoor swimming pool and small exercise room are available too.

The restaurant serves the standard menu as used by all Novotels in the region. The menu is not particularly interesting but the food good enough for the occasional meal. The breakfast buffet is good for Italy, where breakfasts are usually very small, but not particularly varied or imaginative.

The bedrooms in the Novotel can sleep up to four, which is great for families with children under 16, who share a room and breakfast for free with their parents. The sofa folds out into two single beds – rather than a double – which is very much appreciated by children.

The bedrooms use the current Novotel design with mostly light wood and subtle colors. Unfortunately, this design includes the rather irritating glass bathroom doors that allow the whole room to be flooded by light if used at night.

The predominantly white bathrooms with separate bath and walk-in shower are very nice and well lit. As usual, the Novotel is not stingy with towels or toiletries for a family of four.

Closet space is very limited although the room itself is not cramped. Kettles are provided with some of the superior rooms fitted with a Nespresso machine. Rooms have mini fridges and a mini safe.

Although the hotel is air conditioned, the whole system switches off arbitrarily during October. This may leave the room very hot – although windows can open, noise from the very busy road becomes quite intrusive (but not a problem when the double-glazing windows are shut).

Location of the Novotel Bologna Feria 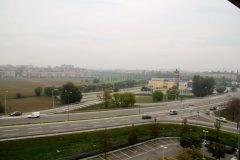 The Novotel Bologna Feria is located right across from the huge Bologna fair grounds and exhibition center. The area can be a bit quiet – although the main road in front of the hotel remains busy – when no exhibitions or shows are in progress. A steakhouse and cinema are across the road but further shops and restaurants are around a kilometer away.

Access to the Novotel Bologna Feria is very easy from highway A14 and the Tangenziale (ring road) – use exit Fiera. This makes the Novotel Bologna also a great base when exploring by car other towns in the Emilia Romagna region. A few free parking spots are available in front of the hotel with only cars on expense account driving pass to the secure (paid) parking area.

During quiet periods, double rooms (and four-bed family rooms) can be as cheap as €60 per night but around €90 is more common. During major shows, the room price may be closer to €230. Breakfast is €14 but often much cheaper if booked (and paid) in advance – children under 16 eat breakfast for free with parents.