The Anne Frank Huis (House) is one of the most popular museums or sights to see in Amsterdam. Tickets are only sold online – no tickets are sold directly at the museum itself. 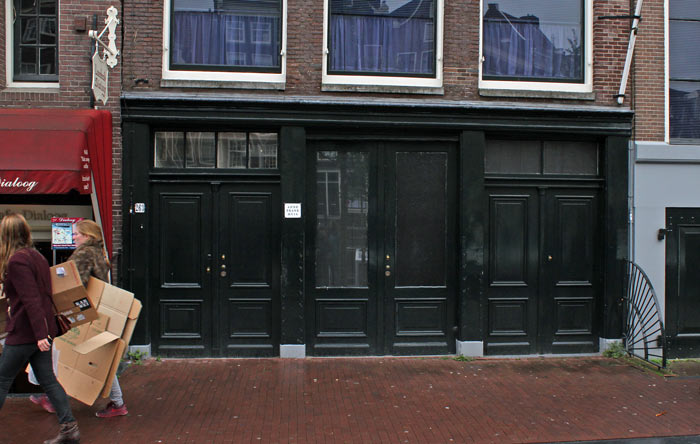 The Anne Frank story is well-known worldwide making a visit to the house in Amsterdam where she and her family hid from the German occupiers during the Second World War one of the most popular sites to visit in Holland. For many visitors, visiting the Anne Frank Huis is almost a pilgrimage while others are disappointed by the often crowded interior and rather bare displays. Queuing outside the Anne Frank House Museum has disappeared in 2018, as no tickets are sold at the museum itself. All tickets for the Anne Frank Museum are only sold online with admission during a specific times slot. Currently, 80% of time slots are available two months in advance with the remaining 20% available for purchase online for visits on the same day.

The Diary of Anne Frank in Amsterdam

Anne Frank was a German-born Jewish girl who famously wrote a diary of the months she and her family hid from the German occupiers in a small annex to her father’s business in Amsterdam. Het Achterhuis – literally, the house behind but usually translated as the annex – was behind the factory at Prinzengracht 263 (Prince’s Canal).

The Frank family and a few friends stayed in hiding from July 6, 1942 until their betrayal on August 4, 1944. With the exception of the father Otto Frank, all hiding in the annex died in concentration camps. Anne Frank died in Bergen-Belsen in March 1945.

Miep Gies, one of the Dutch helpers of the Frank family, discovered Anne Frank’s diary and after the war, Otto Frank decided to have it published as Het Achterhuis in 1947. The Diary of Anne Frank has since received worldwide fame making the Anne Frank Huis one of the most popular literary-historic sights to see in Europe. Annually, the Anne Frank House in Amsterdam receives well over a million visitors.

The Anne Frank House in Amsterdam

Visitors to the Anne Frank House enter the museum through a modern side building and move mostly in single file through the various rooms. After all, the main attraction of the museum is a house that was small enough to hide behind the main building.

A free audio guided makes it much easier to enjoy the museum without having to try and read small labels with visitors constantly pushing even if unintentionally – the museum does get very full.

Displays, models, photos, and videos inside the former factory and adjacent buildings explain the story of Anne Frank and the circumstances surrounding her life and times. A scale model show the annex furnished.

Visitors enter the annex itself via the famous movable bookcase and see the rooms of the hiding place. The rooms are unfurnished with a few personal items still on display, e.g. the map on which the family followed the progress of the allied invasion, the growth lines of the children on the wall, photos, and pictures Anne used to decorate her room.

Anne Frank’s original diary, notebooks, and other sheets of paper with her notes are seen on the way out in a modern display room with examples of the diary published in many other languages.

The main criticisms of the Anne Frank House were the long queues to get in, the lack of visitors’ facilities, the crowds inside, and the rather bare rooms. All of these criticisms are valid to some extend but the change to online tickets only alleviate the most serious one. The free audio guide now makes it much easier to enjoy displays without having to push all the way to the front to read the descriptions. However, the crowds should not be a surprise for a sight so popular and physically small.

The decision to keep the rooms in the annex empty and unfurnished was consciously made by Otto Frank to respect and remind that the others did not return after the war. It would hardly have been possible to move visitors through the annex if the rooms were furnished – it was a hiding place not a palace with service corridors.

It is also worth studying the museum’s website in advance – it has some very interesting and well presented documentation on Anne Frank and the period. It is also a fun way to prepare children for a visit to the house itself. Following the story, events, and the videos is much easier on the website rather than inside the crowded museum.

Visiting the Anne Frank House combines well with a to visit the Resistance Museum (Verzetsmuseum) for visitors interested in Dutch history during the Second World War.

Tips on Buying Tickets for the Anne Frank House

Ticket prices for the Anne frank Museum are €10 for adults, €5 for children 10 to 17, and free for children under 10 (but they must be included when buying tickets). The Museumkaart (Dutch Museums Card) is valid but the I Amsterdam Card not.

Museumkaart holders and children can also buy tickets here – and it is a very sensible 50-cent investment. All online tickets have a service fee of €0.50 per ticket.

Tickets for the Anne Frank Museum often sells out making it sensible to book as far in advance as possible. However, with 20% of the tickets available for purchase on the day of visit, it is always worth checking again – visitors without advance purchase tickets will still not be guaranteed admission but at least it is no longer necessary to queue up to find out.

Many Anne Frank tours are offered in Amsterdam but these are of the neighborhood she lived in, the musical, etc. and does not include admission to the Anne Frank House. The museum sells tickets only to individuals and not to resellers or group tours.

Morning tickets still seem to sell out fastest with late afternoon, and especially evening tickets more commonly available, which on its own should indicate that a visit later in the day will be a more pleasant experience.

The Anne Frank Museum is open daily from 9 am. From November to March, the museum closes at 7 pm (9pm on Saturdays) and from April to October it closes at 10 pm. The museum is closed on Yom Kippur (19 September in 2018) with opening hours shorter (or longer) on some other major vacation days.

The Anne Frank House has no cloakroom or coin lockers. Small backpacks may be carried by hand but buggies and any larger bags may not be taken into the museum building.

Some staircases inside the museum are extremely steep even for visitors who otherwise have little difficulty walking or negotiation regular stairs.

The Anne Frank Huis itself is not accessible to wheelchair users, although the newer sections of the museum are.

Photography is not allowed inside the Anne Frank House or the newer museum sections.