Ferries go from Lausanne in Switzerland to Thonon and Evian in France while pleasure boats cruise on Lac Léman to Genève, Nyon, Vevey, Montreux, and other Swiss towns on Lake Geneva. 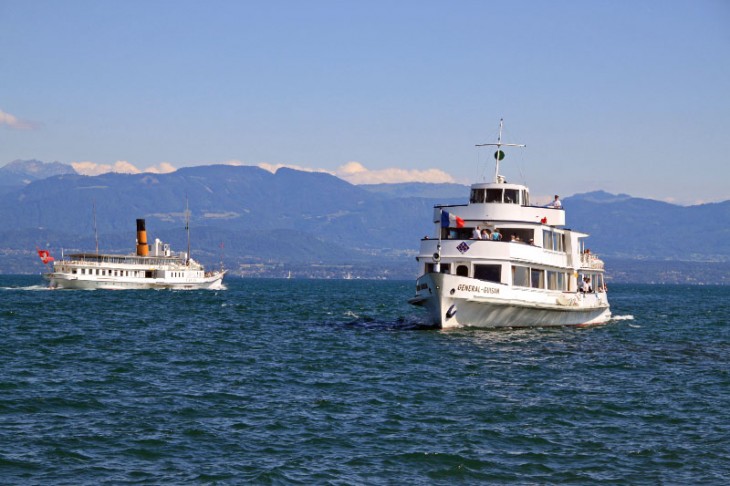 Dinner and lunch cruises are available (with fondue cruises popular in winter, autumn, and spring). Ferries, pleasure boats, and historic paddle steamers from Lausanne are operated by the Compagnie Générale de Navigation sur le Lac Léman (CGN). Lausanne is not only a popular departure point for boat cruises but also located where the Alpine backdrop over Lake Geneva is at its most beautiful.

Passenger Ferry Boat Services from Lausanne to Evian and Thonon

Lausanne is the Swiss port for passenger ferries to the French towns Thonon-les-Bains and Evian-les-Bains on the southern shores of Lake Geneva (Lac Léman). These ferries carry only passengers and bicycles – no car ferries operate on Lake Geneva.

The two ferry routes from Lausanne are officially known as CGN Mobilité routes N1 (Lausanne-Evian) and N2 (Lausanne-Thonon). Just fewer than 30 crossings of Lake Geneva are made each day per route.

The ferries from Lausanne to Evian and Thonon are aimed at commuters and thus operate year round, although sailings are fewer during winter. The first boats of the day depart for Evian around 5 am and the last ones around 11 pm (hours on the Thonon route are a bit shorter).

Lausanne is a popular departure point for Lake Geneva excursion boat cruises and day trips with many daily departures during summer. During the shoulder season, often only a few boats depart per day while winter cruises are often limited to weekends.

During summer, several long distance cruises cover most of Lake Geneva from Lausanne:

Many further pleasure boats go from Lausanne to Vevey, Montreux, and Chillon with further connections available from especially Vevey. This area of Lake Geneva, known as the Haut-Lac, has the most spectacular Alpine backdrops to the south and the Lavaux vineyards on the north shore.

Lake Geneva boat cruises are often not cheap but many discount offers are available to bring ticket prices down. It is often worth paying extra for first class, as second class passengers do not have access to open upper decks. Boats often slow down during meal times but buying food on board is not compulsory. During summer, historic paddle steamers from the pre-World War belle époque era are used on many routes but do not require any surcharges.

The Daily Card (La Carte Journalière / Evasion) is CHF64 (CHF90 in first class) and valid for unlimited travel for a day on all CGN boats. On longer routes, e.g. Lausanne-Geneva return, the daily card is automatically offered as it is the cheaper option.

All general transportation cards and passes of the Swiss Railways are valid under the same conditions on all regular CGN boat cruises. Thus bearers of the Half-Fare Card receives 50% discount and children with a Junior Card cruise for free with their parents. (The Junior Card cost only CHF30 per child per year and all visitors to Switzerland aged 6 to 16 should get one.)

Family passes are also available in a variety of combinations. Children without a Junior Card can buy a Kid’s Pass for CHF10 (CHF20 in first class) for the day.