Switzerland remains in 2018 with 118 star restaurants the country with the highest Michelin star gourmet restaurant density. 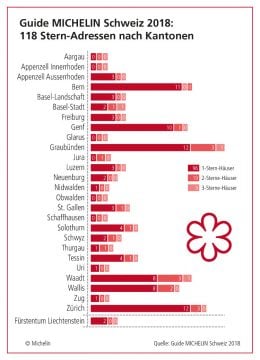 Michelin awarded 16 additional restaurants in Switzerland with stars for the 2018 Suisse / Schweiz / Svizzera Hotels and Restaurants Red Guide. This brings the number of Swiss Michelin-star restaurants to a new high of 118 to maintain Switzerland’s position as the country with the highest density of Michelin star restaurants per capita.

Michelin awarded 14 Swiss restaurants with their first stars in the 2018 Switzerland Red Guide to bring the total up to a new high of 96 (including two in Liechtenstein). This is an increase of only two as 12 restaurants were deleted from the one-star list.

Bib Gourmand restaurant must prepare a good meal at a reasonable price. In the Switzerland 2018 Red Guide, Michelin allows up to CHF70 for a three-course meal to confirm that dining in Switzerland is pricy – in Germany, chefs need to provide such meal for almost half the price.

For 2018, Michelin added a “plate” symbol for restaurants with above average good food if not yet at Bib gourmand or star quality.