The brand new Novotel Lugano Paradiso is a comfortable four-star hotel with swimming pool and rooms sleeping families of up to four in Ticino, Switzerland. 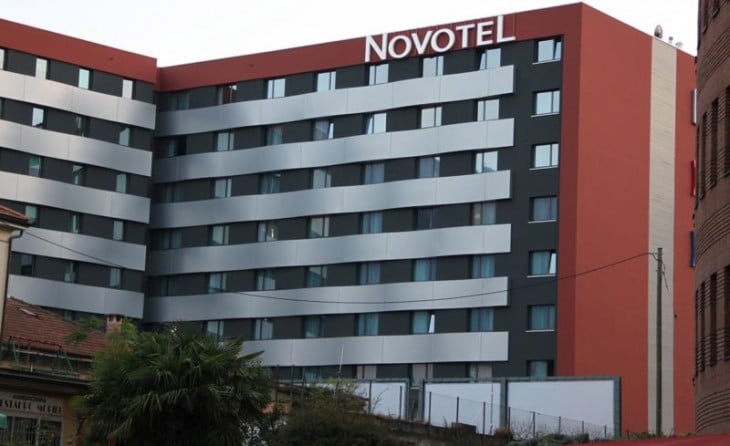 The Novotel Lugano Paradiso is a new mid-scale hotel that opened in July 2012 near Lago di Lugano in the Swiss canton Ticino. The hotel is thoroughly modern and features the latest Novotel style, which is stylish but with some quirks. The Novotel is a great choice for families, as the rooms sleep up to four and children share the room (and breakfast) for free with parents. A welcoming swimming pool provides space to unwind, while the fitness room is reasonably well equipped. Prices are also lower than for similar grand hotels in the Lugano region with no pressure to stay several nights or take food-inclusive package deals.

The Novotel Lugano Paradiso is a brand new, very modern hotel that opened in July 2012 in the Paradiso suburb of the Swiss city Lugano. The hotel is well located, a block or two from the beautiful Lake Lugano with many rooms enjoying partial lake views.

The Novotel Lugano Paradiso is thoroughly modern inside and out. As with most other Novotel hotels, the lobby area is spacious with free to use Mac computers with Internet. The bar and restaurant area is relatively small, which is not too surprising giving the large number of bars, restaurants, and cafés in the immediate vicinity.

The Novotel Lugano Paradiso is surprisingly family-friendly for a chain mostly focusing on business travelers. Rooms sleep up to four people with the two children’s beds a bit shorter and narrower than full-size single beds.

With four beds in use, the room gets rather crowded. The spare beds are fairly cumbersome to convert back to a sofa when made up – it is not the simple lift and push back to a sofa as is possible in most Novotel hotels with the previous room design. On the upside, for the children at least, these beds are much more comfortable than the folding sofa-bed version.

A quirky thing of the Novotel Lugano Paradiso bedrooms is that the bathroom and bedrooms are separated large windows rather than a wall. The glass can be clear to allow free view or go milky at the press of a button. Several guests were heard commenting on this negatively with some finding it gave the room a hospital feel. Many may find it downright off-putting. The novelty of watching the Olympics on TV while taking a shower wears off quickly. 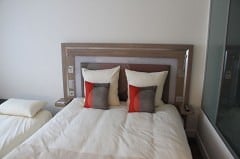 The bedrooms are otherwise reasonably spacious with more closet space than in previous designs. Rooms also have a kettle, paper cups, a small fridge, and large safe.

In the summer heat of Lugano, a stronger air-conditioning system would have been welcome. The room felt two or three degrees C too hot at night for a comfortable sleep. Windows can open fully. 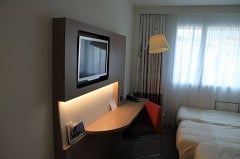 Free wifi, with reasonably speed, is available in rooms but a new wifi code must be collected daily from the front desk. Lightening is good and sufficient electric sockets are available for electronic gadgets needing power.

Various media can be linked to the television provided the necessary cables were brought with. The television has a wide range of programs – not just the news but also many regular BBC and ITV programs for English speakers. However, the menus are very cumbersome with slow response times.

Swimming Pool and Gym in the Novotel Lugano Paradiso 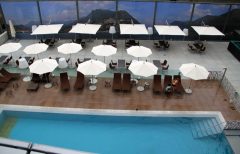 The Novotel Lugano Paradiso has a fairly large swimming pool, which receive a lot of sunshine in summer to leave the water very pleasantly warm by late afternoon. The pool patio bar was not open but drinks were served from the bar in the main building.

Rather irritatingly, pool towels have to be collected from the front desk, which can be a long wait if people are checking in. The wait is even more frustrating when returning the towels, when it is obvious that you want to hand back the towels but are still forced to wait for other guests going through a full check in. It is not entirely clear why the management here considers the propensity of guests to swipe the canary yellow pool towels higher than from other Novotel hotels where towels are self-service at the pool.

The fitness room is fairly large and better equipped than many in similar hotels. Further fee-based spa facilities are being planned.

Location of the Novotel Lugano Paradiso in Switzerland

Access is easy by car – many drivers will be able to avoid the navigation nightmare of central Lugano when driving to Paradiso. This makes the Novotel a great choice for stopovers when driving from northern Europe to Italy. In July / August 2012, many guests seem to have been Dutch and German families stopping over en route to and from other holiday destinations.

Underground parking (CHF20) is available at the hotel. Tickets need to be validated every time at the front desk – the Novotel here has not yet managed the in-out validation system for the duration of the stay.

The bus stop – with very frequent bus services to Lugano – is very close to the hotel with the train station also only a few minutes walk uphill. The funicular to Monte San Salvatore is a short block from the hotel.

Breakfast in the Novotel is CHF27, which is fairly standard for Swiss hotels. However, many restaurants and cafés are available in the immediate vicinity, including across the road a Münger bakery with coffee shop, which is open even on most public holidays. Migros and Denner supermarkets are a block away.

As with many other Accor Group hotels, the Novotel Lugano Paradiso shares the building with other brands. In this case the cheaper Ibis and even cheaper Ibis Budget hotels. Room prices vary widely with demand – with luck the Novotel can even work out cheaper than the budget brands.