Each Christmas Eve, the NORAD Tracks Santa Operations Center uses radar, satellites, Santa Cams, and jet fighters to track Santa Claus on his flight from the North Pole to bring gifts to children the world over. 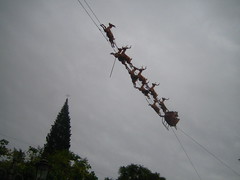 NORAD’s radars track Santa Claus’ progress around the world on Christmas Eve. Using radar, satellites, and even jet fighters, NORAD can follow Santa’s progress and report where Santa and his reindeer-pulled sleigh are on their trek from the North Pole to bring Xmas gifts to children on the night of December 24.

NORAD has been tracking Santa Claus since 1951 after Sears had mistakenly used the telephone number of the Continental Air Defense Command (CONAD) – since 1958 known as NORAD – in an advertisement as the “hot line” to Santa Claus. When the first child called, CONAD decided not to scramble jets to shoot Santa down but rather gave the young caller Santa’s exact position. Ever since, each Christmas Eve, NORAD has been tracking Santa’s progress from the North Pole around the world.

The NORAD Tracks Santa Operations Center is multilingual and operates in English, French, German, Italian, Japanese, and Spanish. From 2 a.m. Mountain Time on December 24, NORAD follows Santa at work. Norad gives a minute-by-minute update of Santa’s exact position so children around the world can be sure where Santa is and that he is still coming.