Public transportation to Aéroport de Chambéry-Savoie is limited to ski buses on weekends and taxis to the train station. Private airport shuttle services and rental cars are also good options. 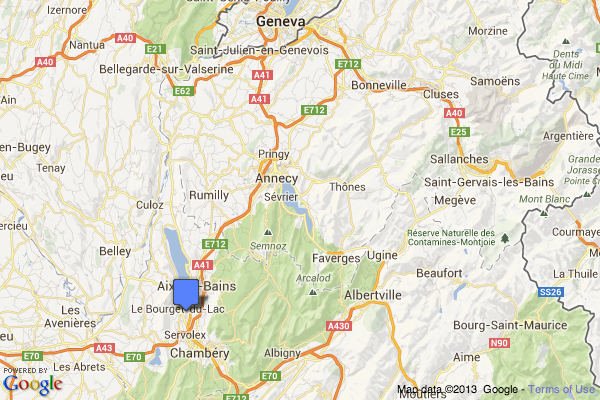 Chambéry Airport (Aéroport de Chambéry-Savoie) is a small regional airport close to some of the most popular ski resorts in the French Alps, such as Tignes, Val d’Isere, and Les Arcs. The airport is used mainly during the winter sports season with public transportation options surprisingly limited. On weekends, buses are available from Chambéry Airport to Moûtiers, Aime, Bourg St Maurice, Tignes, and Val d’Isère. Private airport shuttle vans and car rentals are good options but best reserved well in advance.

Chambéry Airport (Aéroport de Chambéry-Savoie) is located on the southern shores of Lake Bourget around 10 km (6 mi) to the north of Chambéry and about the same distance to the south of Aix les Bains.  However, most passengers arriving here are heading to ski resorts in the French Alps rather than the two pleasant towns in the immediate vicinity.

Scheduled flights to Chambéry Airport arrive mostly from the United Kingdom with charter flights originating from all over Europe. It is possible to fly during winter to Chambéry on bmibaby from East Midlands, British Airways from London City, Flybe from Southampton, Birmingham and Exeter, Jet2 from Manchester, Leeds, and Edinburgh, and Snowjet from London-Gatwick and London-Stansted.

Almost all flights to Chambéry Airport arrive and depart on Saturday or Sunday. Flights during the week are very limited but convenient for skiers with private transportation.

Buses are only available from Chambéry Airport (CMF) on Saturday and Sunday during the winter sports season. On weekdays, travelers without private transportation arrangements should take a taxi to Chambéry station (around €20) and proceed from there by train or bus.

The Trans Neige buses, operated by Altibus, are generally the cheapest ski bus transfers available from Chambéry Airport. Trans Neige buses take an hour from the airport to Moutiers, 1h40 to Aime, and just over two hours to Bourg St Maurice. These buses are not always suitable for very early flight departures or late arrivals.

An alternative to the Trans Neige bus is the SnowBus. It is slightly more expensive but offers different times and slightly faster transportation to Bourg St Maurice, Tignes, and Val d’Isère.

Chambéry Airport’s proximity to many ski resorts make private transfer shuttles a slightly cheaper option than from Geneva Airport. Car transfers from Chambéry to popular French ski resorts are often an hour faster than from Genève. However, prices and conditions vary widely making it worth comparing more than one shuttle service provider before making reservations. Low-cost airlines’ preferred providers are often not the best deal available.

The best alternative to Chambéry Airport is usually Geneva Airport (GVA) in Switzerland. Grenoble Airport (GNB) is also a sound alternative popular with many flights on low-cost airlines.