Children are Welcome and Entertained at Germany’s Largest Folk Festival

Oktoberfest in Munich, Germany is world famous for its beer tents. However, Oktoberfest is also a folk festival with rides and entertainment for families traveling with children. 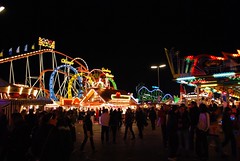 Many foreign travelers may be surprised that Oktoberfest in Munich (München), Germany is also a folk festival where children are most welcome. Almost 10% of Münchner visit Oktoberfest with their children while the percentage for foreigners is below 3%

The famous beer tents of Oktoberfest may well host the world’s greatest drinking party but the festival grounds also have numerous rides and other entertainment eminently suitable to families traveling with children of all ages. Das Familienplatzl is a special tent for families with facilities, entertainment, activities, and food suitable for smaller children. It is open daily.

Where in München is Oktoberfest Held?

Oktoberfest is held annually on the terrain of the Theresienwiese (or Wiesn) a few blocks to the south of the München Hauptbahnhof (Munich Main Station). The Theresienwiese host the only real Oktoberfest although at least 2,000 other Oktoberfest festivals are held around the world (and mostly in the wrong month!).

When is Oktoberfest Celebrated in Munich, Bavaria?

The October in Oktoberfest is misleading. Oktoberfest is mostly held in September – it lasts for 16 days and finishes on the first Sunday in October. (If October 3, a German national holiday, is on a Monday, Oktoberfest is extended by a day.)

The Oktoberfest festival grounds at the Theresienwiesen is open daily from 6 am to 1:30 pm but the main action is from 10 am (9 am on weekends) to just before midnight. Alcoholic drinks may only be served from noon to 10:30 pm.

It is a good idea to leave before 10 pm (and before 6 pm if traveling with children) – public transportation is very crowded after closing time and many drunken louts from all nations and inclinations hang around once the beer taps are turned off.

Traveling with Children to Oktoberfest in Munich in Germany

Oktoberfest has official family days: Tuesdays from noon to 6 pm. On family days, families receive discounts on admission tickets and some rides are cheaper too. However, children are welcome all days and many rides offer discounts on weekdays during the slower daylight hours.

Mondays and Wednesdays are generally quieter while weekends and all days after 6 pm are very busy. Strollers and buggies may not be used on Saturdays. Visiting durin gthe afternoons are often useful to avoid school parties that generally visit in the mornings only.

Hotel accommodation in Munich and the immediate region is best reserved well in advance as hotels book out early, despite high prices, during the full Oktoberfest period. Expect to pay top euro for even simple hotels during this period. The Munich Tourist Office claims there are always beds available in most price classes but travelers who reserve late may have to book hotels in smaller towns in the Bavarian countryside surrounding Munich.

Last-minute reservations are best made through online hotel reservation services that will have access and availability information to the limited number of rooms available.