The Arian Baptistery in Ravenna in Italy is UNESCO-listed as an excellently preserved example of an early Christian monument with a Late Antiquity mosaic.

The Arian Baptistery is one of eight monuments in Ravenna inscribed on the UNESCO World Cultural Heritage list as early Christian monuments and Late Antiquity (or Byzantine) mosaics. It is less famous than some of the other sites but it is small and worth a few minutes when walking from Sant’Apollinare Nuovo to other sites in Ravenna. The Arian Baptistery is mostly visited to admire its well-preserved domed mosaic showing Christ being baptized by John the Baptist.

Theodoric the Great and Arianism in Ravenna

Theodoric the Great (456 – 526) was the king of the Ostrogoths, amongst other titles, from the late fifth century onwards. Theodoric and the around 200,000 Ostrogoths that settled in Italy during the fifth century were Christians but subscribed to the Arian doctrine – something that had been declared a heresy already at the Council of Nicea in 325.

The main difference between Arianism and orthodox doctrine is about the Holy Trinity. To really simply things: Arianism considers Jesus Christ not to be co-eternal and divine, as was God the Father. For Arians, the Son of God was created by God the Father and “grew” into the role of being God. Christ in Arian iconography is often showed beardless as a young man, which is fairly uncommon (but not unknown) in orthodox art.

However, with Theodoric firmly in control of Ravenna and most of Italy, few dared speak out too firmly against Arianism. Theodoric initially mostly tolerated other beliefs and doctrines. However, during his reign, Ravenna was mostly divided into Arian and Orthodox (later Roman Catholic) sections. Each had their own churches, baptisteries, and other religious sites for separate worship.

The conflict between Arianism and Orthodoxy was a major influence on political developments in the fifth and sixth century, as there were no distinction between church and state. However, from 540 Ravenna came under the direct control of Constantinople with Arianism increasingly sidelined and eventually banned.

Many Arian iconography was subsequently removed from churches – see for example Sant’Apollinare Nuovo – while others, such as this baptistery was converted to a private oratory.

The Arian Baptistery in Ravenna

The Arian Baptistery in Ravenna was originally part of a cathedral erected by Ostrogothic King Theodoric in the late fifth, early sixth century. The church has since been rebuilt smaller.

This small baptistery was long part of other complexes and surrounded or attached to other structures. It is only the destructive consequences of allied bombings in the Second World War that allow us to see the baptistery freestanding.

The Arian Baptistery is a small octagonal brick building. It has four flat sides with small protruding apses from the remaining four sides. Like most other buildings in Ravenna dating from Late Antiquity, the Arian Baptistery has also sunk into the ground with the floor now more than 2 m (7 ft) below street level.

The Mosaics in the Arian Baptistery 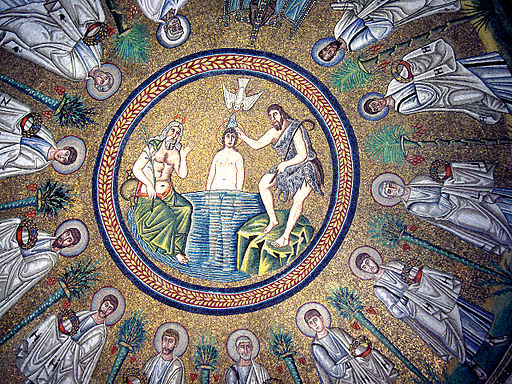 Inside, the walls are bare – they were originally covered by frescoes. However, the dome has its original mosaic of Jesus Christ being baptized by John the Baptist with the Holy Spirit in the form a dove looking on. An old man in green looks on as a pagan god representing the River Jordan. A band featuring the twelve apostles carrying crowns encircles the central medallion.

The mosaics here are quite similar to the older ones in the Neonian Baptistery.

The iconography of the mosaics is considered significant as it displays the holy trinity, something that Arians did not belief in, and the main point of difference with the orthodox doctrine. It is considered likely that the artists where local Orthodox artists, as the Ostrogoths were not generally considered skillful in the art of mosaics.

Admission to the Arian Baptistery is only €1, which helps to explain why it is the first UNESCO-listed site to close in Ravenna due to a lack of personnel or funds. The Arian baptistery is supposed to be open daily from 8:30 to 16:30 (19:30 in summer). During the offseason, it may close for 30 minutes after every two hours.

The Arian Baptistery is easily seen when en route to or from Sant’Apollinare Nuovo, which is also closely associated with Theodoric and the Arians, and one of the major mosaic sights in Ravenna.

NEXT: Basilica of Sant’Apollinare Nuovo