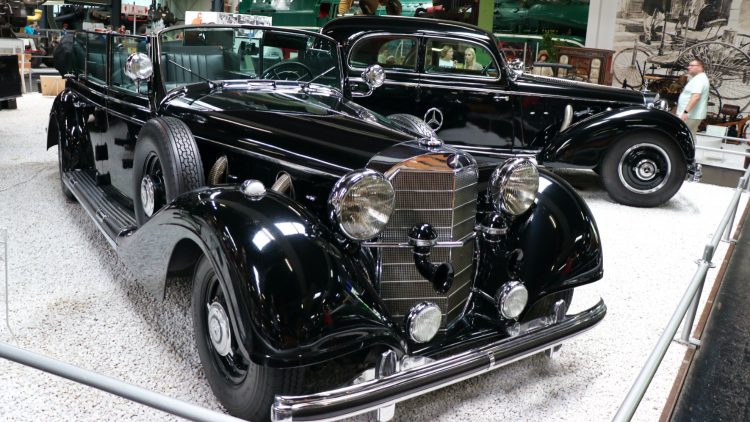 A few of the large Mercedes-Benz models in the Technik Museum Sinsheim are technological masterpieces that the Mercedes-Benz Museum could never display, as these cars were delivered to the German government for used by top Third Reich officials. The more interesting is the totally ridiculous bullet-proof cabriolet (1938 Mercedes W150/770K) that was used by Adolf Hitler as a parade vehicle — it had a bomb-proof underbody and chassis, armored-plated glass and panels, but of course, only thin air when the roof was opened and Hitler stood up, which he loved to do. More sensible was the similar plated limousine. Only 10 were made of which only 3 survived. Two are on display in this museum. The 1943 Mercedes-Benz 770K was used by amongst others Heinrich Himmler. These 770K  cars were powered by a straight 8-cylinder 7,600 cc compressor engine good for 230 PS and a top speed of 140 km/h, which was limited to 80 km/h as the weight was too much for the tires.