A pleasant walk through the streets and parks of the banking area of Frankfurt am Main, Germany passes by top sights (Alte Oper), shops, as well as numerous cafés, hotels, and restaurants. 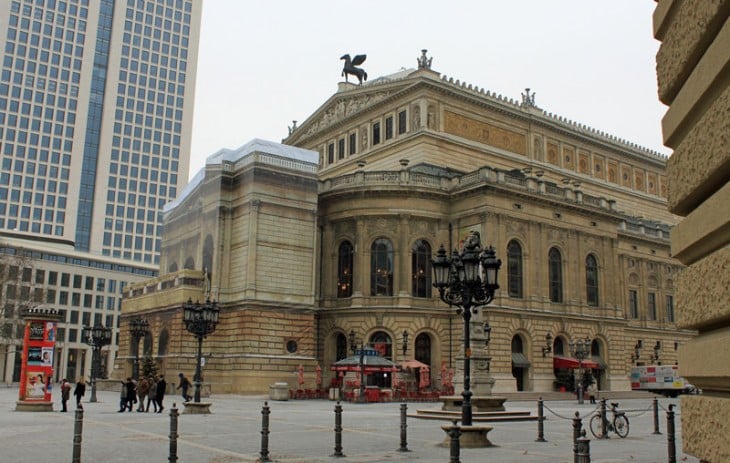 Frankfurt’s Neustadt (New Town) is the area presently bordered by a green belt of parks and the Main River. The Neustadt was outside the original town walls, which encircled the Altstadt (Old Town) but still inside the expanded walls that were demolished only during the 19th century to make way for a greenbelt. In 1945, air raids destroyed large parts of Frankfurt – as a result many buildings in Neustadt are indeed new even though the suburb itself is several centuries old.

Frankfurt’s Hauptbahnhof (Main Station) is the busiest train station in Germany. In the immediate vicinity of the Hauptbahnhof is the largest concentration of hotels in Frankfurt. Directly across the road from the station are the luxurious Steigenberger Hotel Metropolitan and the Inter City Hotel, favored by especially business travelers but also leisure travelers keen to stay within easy reach of the station. The Frankfurt Intercontinental Hotel as well and the low-cost Frankfurt Ibis Hotel are a few blocks away but both have clear views of the Main River.

From the Hauptbahnhof, stroll down Kaiserstraße towards downtown, or alternatively, use the parallel Taunusstrasse that goes through the heart of the red light district. Following the demolition of the town walls in the 19th century, a green belt was created that runs in a half moon from the Main around the former old town – streets here generally have “Anlage” in the name as a reference to the defensive structures.

Across from this park is the temporary head office of the European Central Bank. A few blocks further, across from the Steigenberger Frankfurter Hof Hotel – the grand dame of Frankfurt hotels – is the Commerzbank Building, at 259 m (850 ft) the tallest in Europe (no viewing platform, but several restaurants are open to the general public on the ground floor).

Strolling north in the park affords good panoramic views of Frankfurt’s high-rise buildings that are in Germany. The Alte Oper (Old Opera House) is a 19th-century, Neo Classical opera house that was bombed out during the Second World War. For more than three decades, until it was restored in 1981, this empty shell was considered the best-looking ruin in Germany.

The head offices of Deutsche Bank is diagonally across the road. The bank’s glass-paneled twin towers are locally known as “Soll und Haben” (Debit and Credit).

Frankfurt has many restaurants and cafés where it is possible to linger but also have a quick snack as many bankers and business people often seem pressed for time. Many restaurants, cafés, and up-market delis are in the Grosse Bockenheimer Straße, a pedestrian street also known as Freßgasse (Gluttony Alley) that leads from the Alte Oper towards the old town. Parallel to the Freßgasse is Goethestraße with Frankfurt’s most fashionable boutiques and international fashion brands.

The park continues behind the Alte Oper and soon leads to the modern Frankfurt Hilton Hotel, with a large indoor swimming pool open to the general public. Across the road is the Frankfurt Hard Rock Café although its neighbor, Your’s Australian Sports Bar, is more inviting with similar fare. Nearby is the Eschenheimer Tor, the best looking of the surviving medieval tower gates.

Although it is possible to continue along the park all the way to the Main, turn away here towards the Hauptwache, an early-18th-century former police station and major public transportation hub. From here, go down the Zeil for shopping or take an historic old town walk with visit to the Goethe Haus and Museum.

Getting to Frankfurt on Public Transportation

The Frankfurt Hauptbahnhof is the busiest in Germany and has excellent links to all of Frankfurt (and Germany). The main station is only around 10 minutes by S-Bahn from Frankfurt Airport.

The Hauptwache, at the end of the walk, has excellent transportation links back the Hauptbahnhof and Airport or across the Main to Sachsenhausen and the Museum Bank.

See All Frankfurt Tours and Activities