Frankfurt am Main has a small but pleasant old town worth exploring on foot – top sights to see include the Römer, Kaiserdom, Goethehaus, museums and Main River banks.

Most of Frankfurt’s historical core was destroyed in air raids in 1945. Although the city rebuilt mostly modern, some historic buildings were restored including the Römer Rathaus and half-timbered buildings on Römerberg. The old town is small and flat making historic Frankfurt a pleasant city to explore on foot.

Hauptwache in Frankfurt am Main

The Hauptwache (Main Guard), a former 18th-century police station, is at the edge of the official old town. The actual building was moved a few meters after the Second World War to make place for the underground train station, which is what most visitors associated the name Hauptwache with. Several train lines cross here with direct S-Bahn trains from the Main Station (Hauptbahnhof) and Airport (Flughafen). The Hauptwache currently houses a surprisingly reasonably priced restaurant-cafe.

The large pedestrian road leading from the Hauptwach eastwards is the Zeil. (Frankfurt likes to claim that it is the most important commercial street in Germany but many other cities dispute this.) The Zeil is mostly lined by the usual chain stores found in most German cities (and increasingly most European ones too).

The yellowish Katerinenkirche (St Catherine’s Church) – it is not particularly interesting but go down the street to its right and turn right into Hirschgraben to see the Goethe Museum. Germany’s leading poet, Johann Wolfgang von Goethe, was born here.

If Goethe is of no interest, following the pedestrian street (Liebfrauengasse) to the left of the church down to the Main River. En route are the Gothic Liebfraukirche (Church of Our Dear Lady) and the round neo-Classical Paulskirche (St Paul’s Church) – both were rebuilt after the war. The Paulskirche housed the first all-German parliament during the nineteenth century and is currently mostly used as a conference and events center.

Römerplatz – the Heart of Historic Frankfurt am Main

The large, irregularly shaped and slightly sloping Römerplatz square has been the center of all festivities in Frankfurt for centuries. The Römer is the historical town hall with a neo-Gothic façade. The half-timbered buildings lining the square are true copies of the originals. Behind them is the ultra modern Schirn Kunsthalle (Art Space). The Schirn houses excellent exhibitions of mostly modern art. German emperors were traditionally elected and crowned in the Gothic Kaiserdom (Imperial Cathedral).

At the south end of Römerplatz is the Nikolaikirche (St Nicolas’ Church). Its interior is miniscule despite the high roof. Behind it is the Historical Museum with eclectic material on Frankfurt’s rich history. Across the alley is Haus Wertheim, the only half-timbered building in the old town that survived the inferno of 1945. It now houses a traditional German restaurant.

A block downstream along the Main River is the Leonardikirche, a Romanesque-Gothic mixture and the oldest church in the center of Frankfurt. (It became the second oldest church in Frankfurt after Hoechts with the older St Justinuskirche became part of the city in the early twentieth century.) Nearby is the Karemeliterkloster (Carmelite Monastery) with the largest religious mural north of the Alps. It also has interesting cloisters.

Sights along the Banks of Main River 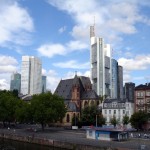 The best views of the Frankfurt skyline are from the pedestrian bridge crossing the Main River. Frankfurt is the only city in Germany with numerous tall buildings, which combined with the river name (and a lot of wishful thinking) led to the name Mainhattan. The highest skyscraper in Frankfurt (and Germany for that matter)  is the 260-m (850-ft) Commerzbank Building.

On the opposite south side of the Main River is the suburb Sachsenhausen. Sachsenhausen suffered little war damaged and has many mostly late-nineteenth-century Gründerzeit villas. The southbank of the Main is called Museumsufer (Museum Bank) after the huge number of museums located here, of which the Städel Art Museum is the most famous.

The easiest way to the old town is by S-Bahn train. From Frankfurt International Airport (FRA) take any S-Bahn train in the direction of the Hauptbahnhof (Main Station) and continue two stops further to Hauptwache. Alternatively, from the Hauptbahnhof to Römer use tram 11 or U-Bahn trains U4 or U5. This easy transportation makes it possible to explore Frankfurt even when on a few hours stop over at Frankfurt Airport or Hauptbahnhof.

Frankfurt’s old town is fairly compact. The walk from the Hauptwache via the sights described (excluding Sachsenhausen) can be done in a rushed half hour but allow much more time to explore or visit the sights. The route is flat and fully accessible to wheelchairs and strollers.

The walking tour of Frankfurt’s old town combines well with a walk of the Neustadt banking area of Frankfurt. The Museum Bank in Sachsenhausen with its large number and variety of museums is excellent for rainy days and more intellectual entertainment.

See All Frankfurt Tours and Activities