What to Do in Holland during Xmas, Advent, and December

Christmas events in the Netherlands include the arrival of St Nikolas in Holland, the Santa Claus race in Rotterdam, Pink Christmas in Amsterdam and many markets and concerts during December. 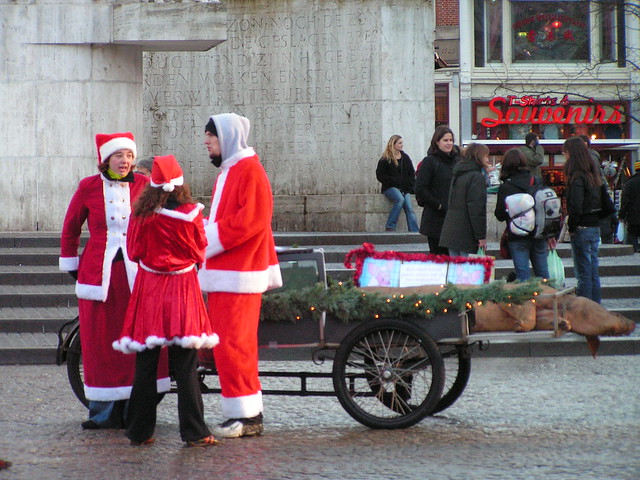 Christmas festivities in the Netherlands usually start early with the arrival of Sinterklaas (Santa Claus) and his helper Zwarte Piet (Black Peter) in mid-November. Christmas festivities go in overdrive throughout the Amsterdam, Holland, and the rest of the Netherland during December. In addition to Christmas markets and Christmas decorations, notable events include the Santa Claus race in Rotterdam, the Pink Christmas gay festival in Amsterdam, and the lightening of historic building such as the Gothic town hall in Gouda.

The Dutch Tourism Office recommends several events to enjoy in the Netherlands during the run-up to Christmas:

Arrival of Santa Claus in the Netherlands

The arrival in the Netherlands of Santa Claus (Sinterklaas) and his helper Black Peter (Zwarte Piet) is eagerly awaited by Dutch children. Traditionally, the two arrive in the Netherlands by ship from Spain and then tour throughout Holland to deliver gifts to good children on the eve of December 5 and to whisk naughty children back to Spain – the latter not such a fearful threat as it used to be centuries ago!

The arrival of Santa Claus kicks of the Christmas season in the Netherland. Many Christmas events including markets, festivals, and concerts follow his arrival. Many Dutch towns and cities will put up decorations and most shops of course too.

In Amsterdam alone, around 600 Black Peters will hand out up to four tones of biscuits to children. Eager children eagerly await the parade of colorful wagons that tour the streets of Amsterdam.

December 5 is traditionally the day children in Holland receive their Xmas gifts but many children score double and now receive Christmas gifts during December 24 or 25 as well.

In Rotterdam, a new tradition held on December 23 is the Santa Claus race. The brainchild of a local radio station, the Q-Santa-Run sees several Santa’s running a five kilometer race through the streets of Rotterdam. During 2008, 3000 Santas (both male and female) participated in the Santa Claus race.

Using real candles rather than electric lights remains very popular in the Netherlands. Many historic buildings are lit by candle light during the Christmas period throughout Holland.

Gouda bei Kerzenschein (Gouda Lit by Candles) is one of the best known of these events. Mid-December, for one nights only (Dec 15 in 2009), the town hall and adjacent buildings on the market square are lit by candles while a special Christmas program takes place on the Markt.

Candles are also used on some days to lit former Royal palaces including the  Kasteel Middachten Castle near Arnhem and the Palace Het Loo near Appeldoorn.

Christmas Markets in Holland and the Netherlands

Many a Dutch citizen will cross the borders to Germany during Advent to visit Christmas markets but many fine Christmas markets are available in the Netherlands too. One of the more interesting is held from end November to just before Xmas in the caves at Valkenburg in the Dutch province Limburg. Many other Dutch communities will also host Christmas markets and numerous Christmas related events. (N091107)