The new Eiger Express cable car takes only 15 minutes from Grindelwald Terminal to Eigergletscher from where the mountain train climbs to the Jungfraujoch-Top of Europe station.

The train ride to Jungfraujoch-Top of Europe station in the Alps is a popular day-trip excursion for travelers in Switzerland. Since 2020, the new Eiger Express cable car from Grindelwald Terminal shortened the journey to Jungfraujoch by around 45 minutes, although the final stretch to the top of the mountain remains by cogwheel mountain railway train. The traditional trains-only route is still available and may be combined with a cable car ride. The price remains the same with tickets available online, from vending machines, or anywhere selling Swiss railway tickets. Day-trip tours to Jungfraujoch are popular and are likely to use the cable car route.

The Eiger Express cable car operates between Grindelwald Terminal and Eigergletscher in the Swiss Alps near Interlaken. It uses tricable technology to transport up to 26 passengers per gondola. As the system can transport up to 2,200 travelers per hour, this new faster route is likely to become the more popular way to reach the Jungfraujoch-Top of Europe mountain station.

During the 15-minute cable-car ride, passengers are transported from Grindelwald Terminal at 937 m above sea level to the Eigergletscher station at 2328 m. The cable car ride is 6,483 m long but remarkably needs only seven support pillars en route. 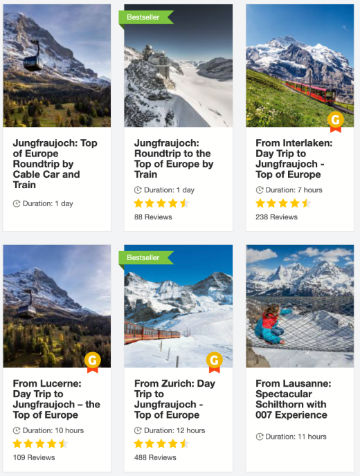 The Eiger Express cable car shortens the journey to popular hiking and skiing routes but for most foreign travelers, the main attraction is to reach the cogwheel train leading to the Jungfraujoch-Top of Europe station — the highest mountain railway station in Europe.

The Eiger Express cable car shortens the train ride from Interlaken-Ost, and most other departure points in Switzerland, to Jungfraujoch by 47 minutes. Traveling time from for example Bern dropped from 3h20 to 2h30 and from Zurich from 4h20 to 3h30.

The traditional three-railway routes via either Grindelwald or Wengen are still possible and may be combined with the cable car route — the prices are the same.

See By Train to Jungfraujoch Top of Europe Station in the Swiss Alps for more details.

Jungfraujoch has long been a popular day-trip destination from other cities including Zurich, Luzern, and even Geneva, and the new faster route allows visitors to spend more time at the top of the mountain and less time traveling there.

Grindelwald Terminal station is also easily reached by car or tour bus. A thousand parking places are available at the station.

The Eiger Express cable cars transport up to 2,200 people per hour. It is not possible to make reservations but groups and individuals use separate entrances, so travelers on day-trip tours are likely to enjoy special arrangements.

The Eiger Express cable car operates daily from around 8:00 to 17:00 — exact hours depend on the season.

The one-way journey from Grindelwald Terminal to Eigergletscher is around CHF37, whether using the cable car or trains. Return fares are only a few cents cheaper than two one-way fares. For skiers and longer holiday guests, various passes are available. The Juniorcard, Half-Fare Card, and many other Swiss railway passes, including the Swiss Travel Pass, are accepted. Tickets are available from almost any outlet that sells Swiss train tickets, or from Jungfraubahnen.

The return fare from Interlaken-Ost to Jungfraujoch-Top of Europe station is around CHF190 to CHF240 (season depending), whether via cable car or trains only — tickets are available online or from any place selling Swiss railway tickets. Groups receive substantial discounts making day-trip tours worth considering, especially when traveling during busy periods.