The Gothic town hall and Baroque guildhalls are the top attractions of Grand Place (Grote Markt) market square in the historic old town center of Brussels. 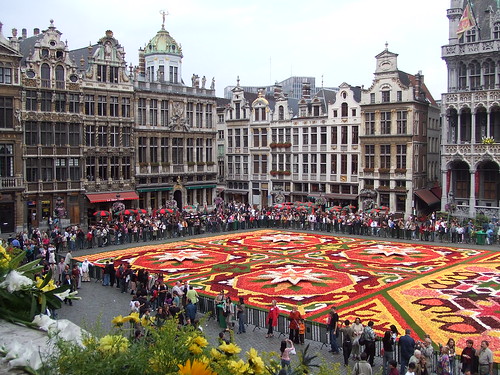 The Grand-Place (Grote Markt in Dutch or Flemish) in the center of historic Brussels is one of Europe’s grandest public squares. The Grand Place has been inscribed on the UNESCO World Cultural Heritage list and is one of the most popular sights in Belgium. Flowers are still sold here most mornings but the Grand Place is at its grandest when it hosts the Tapis des Fleur (flower carpet) every second August. The Hotel de Ville de Bruxelles is the grandest building on the market square but is well complimented by the other Baroque guildhall houses lining the Grote Markt.

The Building of the Grand Place in Brussels

The guildhall buildings on the Grand Place square in Brussels show a remarkable conformity in style. While the town hall is Gothic, the guildhalls are mostly Baroque on medieval foundations.

The French army can be blamed, or credit, for the look of the Grand Place in the historic heart of Brussels. Most of central Brussels was destroyed on August 13, 1695, by the French army bombardments. Although the town hall survived with severe damage, the other buildings in the region were destroyed and rebuilt on orders of the town council in the then contemporary Baroque style.

The largest and most imposing building on the Grand Place in Brussels is the Gothic Hôtel de Ville de Bruxelles (Town Hall or Stadthuis in Dutch). The oldest parts of the town hall date from the 13th century but most of the Gothic building was completed during the 15th century.

The Hôtel de Ville de Bruxelles sports a slightly off-center 96 m (315-ft) high tower. This lovely tower was designed by Van Ruysbroek and is topped by a gilded statue of St. Michael. The interior of the Brussels town hall can only be seen on a guided tour.

Arguably the grandest event on the Grand Place in Brussels is the Tapis des Fleurs (flower carpet), when the center of the market square is covered in flowers. The Tapis des Fleurs is held only for three days in even year Augusts and is worth a journey.

The Maison du Roi (King’s House), across the Grand Place from the Hotel de Ville, is the second grandest building on the square. The Maison du Roi is a misnomer as neither belonged nor ever housed a king.  The name King’s House is probably derived from the practice of reading the absent monarch’s instructions were usually read from here.

The Dutch name for the building is the less royal Broodhuis (literally Bread House) as the bread market was originally located here. The Maison du Roi was rebuilt, like so many other building in Europe, during the 19th century to resemble its early-16th-century appearance.

The local history museum – Musée de la Ville de Bruxelles / Museum van de Stad Brussel – is presently located inside the King’s House. The museum displays some fine art works from the 15th and 16th centuries but is more famous for the collections of  uniforms donated from all over the world to cover up the symbol of Brussels – the boy-statue Mannekin Pis.

The small but famous Mannekin Pis statue is three blocks from the Grand Place. From the market square, go behind the Hôtel de Ville – follow Rue Charles Buls, which changes into Rue de l’Etuve, to where it crosses Rue du Chêne.

The Baroque Guildhalls on Brussels’ Grand-Place

Most of the buildings lining the Grand Place in Brussels are former guildhalls. The decorated facades of these buildings can generally indicate which guilds were headquartered here. These guildhalls are mostly Baroque structures on older foundations and were erected shortly after the bombardments in 1695.

Other interesting guildhalls on the Grand Place in Brussels include:

The guildhalls on the Grand Place in Brussels are mostly used by restaurants, cafés, hotels, and shops. Two famous chocolatiers have shops here: expensive but exquisite Godiva at Grand Place 22 and more reasonably priced Leonidas at Rue au Beurre 34, just off the square towards St Nicolas and the Bourse.

The Grand-Place / Grote Markt is in the heart of historic Brussels a few blocks to the west of Gare Centrale (Central Station) or east of the Beurs / Bourse tram stop. However, most long-distance trains, including the Eurostar, TGV Thalys, and ICE trains, do not stop here but rather at Bruxelles-Midi (Brussels South) station requiring a transfer to frequent local trains or use tram 3 or 4 to Beurs / Bourse. (B090426)