Top sights in Mainz are the Romanesque-Gothic cathedral (Dom), Chagall windows, and the Roman Ships and Gutenberg Museums. Transportation from Frankfurt Airport is easy. 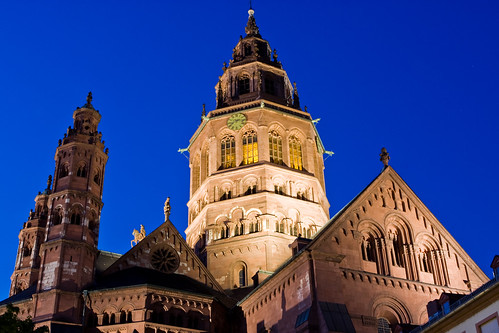 The historic city Mainz is a popular destination for travelers with a short stop-over at Frankfurt International Airport. Many travelers prefer Mainz to more modern Frankfurt and transportation by train is equally easy to either city. The top sights in Mainz include its large cathedral (Mainzer Dom), the Gutenberg Museum, Roman Ships, and the magnificent blue Chagall windows in the St Stephan church.

The top sight in old town Mainz is its large Dom St Martin and St Stephan (Cathedral). Construction of this huge church started in the late 10th century but through the centuries, the cathedral burned down seven times.

The Mainzer Dom is a combination of several styles reflecting it somewhat turbulent history. The remarkably thick walls and somewhat dark interior show the Romanesque origins that Dom share with the Romanesque cathedrals in Worms and Speyer that dates from the same period.

The bronze doors, which are still in daily use, are the only art from the original church. However, the lion doorknobs are two centuries younger. Baroque artworks in the interior of the church, especially tombs of bishops, reflect the wealth and importance of the Archbishopric of Mainz in German history.

The Marktplatz and Gutenberg Museum in Mainz

The Marktplatz in front of the cathedral is the heart of all Mainz festivals and events, including carnival and the Christmas market.  The historic facades on the Marktplatz are copies of the originals lost during the Second World War. Most of old town Mainz was destroyed during the war but some streets behind the Dom escaped war damage and have authentic old buildings.

The Chagall Windows of the St Stephan’s Church in Mainz

Travelers hiking up a hill above the old town are rewarded by some of the most remarkable church windows in Germany. The St Stephanskirche (St Stephan’s Church) is an unremarkable Gothic church but has some of the most remarkable windows in the world. Marc Chagall used 18 hues of blue to create his largest single work and an atmosphere suitable for meditation. Chagall, who never actually traveled to Mainz, designed the colored-glass windows for the apse and transept of the St Stephanskirche. His assistant Charles Marq used 10 tones of blue to complete the rest of the windows following Chagall’s death.

The nave of St Stephan’s Church has a flat wooden ceiling. The church suffered three direct hits during the Second World War and a lack of funds prevented the reconstruction of Gothic vaulting. Staring at the remarkable blue windows, very few of the over 200,000 annual visitors are ever likely to notice.

The St Stephankirche is best visited in the morning for the best light conditions.

Mainz and the Roman Empire Heritage

Mainz at the confluence of the Rhine and Main rivers was an important city in the Roman Empire. However, on New Year’s Eve 406, the Germanic hordes swarmed over the frozen Rhine and destroyed Mainz. Mainz regained importance under the Franks a few centuries later and the Archbishop of Mainz was for centuries one of the most important men in Germany.

Germany has many museums on its Roman Empire past but the Museum für Antike Schifffahrt (Ancient Ships) in Mainz is unique. In 1981, during excavations for expansions to the Hilton Hotel on the banks of the Rhine, five Roman boats were discovered in the mud. These Roam river boats were preserved, a further two full-scale models built, and similar boats from other areas were added to form this interesting collection housed to the south of the old town and not far from the Stephanskirche.

Public Transportation to Mainz in Germany

Mainz has very good transportation links. S-Bahn S8 commuter train connects Mainz with Frankfurt International Airport (FRA) in 26 minutes and continues to Frankfurt Hauptbahnhof in about 10 minutes more. Wiesbaden is on the opposite bank of the Rhine and can be reached in only 12 minutes on the S8 train.

Mainz can also easily be reached in an hour by bus from Frankfurt Hahn Airport (HHN) with its large number of low-cost airline flights on particularly Ryanair.

It is possible to depart from Mainz on riverboat day trips down the Rhine Valley – it is often possible to go on a full-day cruise all the way to Cologne (Köln). However, the scenery is not that great for the first hour or so – travelers with limited time may prefer to take a train to Bingen or Rüdesheim and start river cruises to the Lorelei Valley from there.