The Hans Christian Andersen Museum, birthplace and childhood house are the top sights to see in Odense on the island Fyn in Denmark. 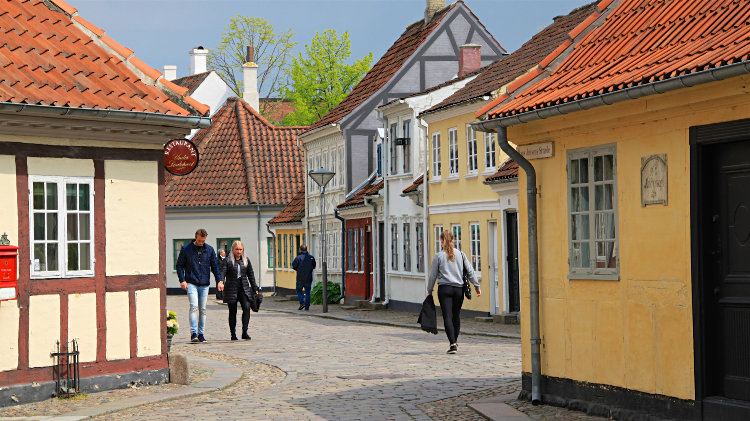 Hans Christian Andersen is the most-famous Dane ever and the museum in his hometown Odense is amongst the most-popular sights to visit in Denmark. The Hans Christian Andersen Museum gives a comprehensive overview of the life and times of the world’s most famous fairy tale writer. A nearby small museum is in the house where he spent most of his childhood. Odense has several Andersen statues and other sights related to the writer. A small neighborhood is also romantically presented as resembling Odense in the time of Andersen, although back then this was a slum. Odense is an easy day-trip destination from Copenhagen but also a good stop when en route to Jutland with enough to see on a weekend trip too.

NOTE: The Hans Christian Andersen Museum (H.C. Andersens Hus) in Odense will be closed from December 2017 until 2020 for the construction of a new museum. 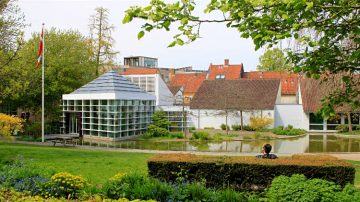 The H.C. Andersens Hus – in Danish names are often abbreviated to initials and surname – is a modern museum in Odense at the region where Hans Christian was presumably born. The museum is divided in around ten theme rooms that explain the life, time and works of Hans Christian Andersen.

The Life of Hans Christian Andersen 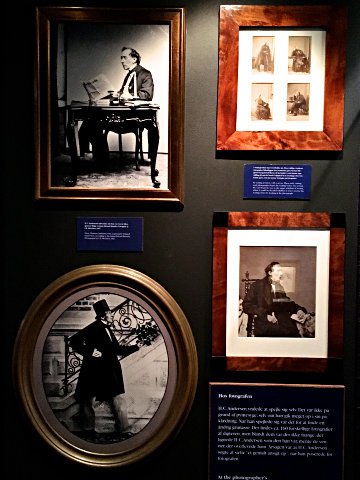 Clara Schuman wrote to her composer husband Robert that Andersen “is the most hideous man you could find, but he looks most interesting and has a poetic, childish mind…”

By all accounts, his unconventional appearance seemed to have bothered Andersen little. He loved looking in mirrors to find comical expressions.

The around 160 photographs of him are said not to resemble the actual man, as he always tried to assume “a brilliant expression” when posing in front of the camera. 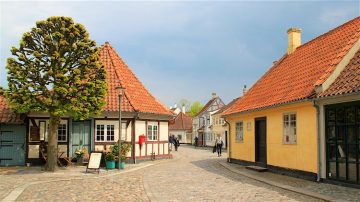 The museum includes the corner house where Hans Christian was born in a room provided by a family member. His parents – a cobbler and washerwoman – could not afford an own place at the time.

This house was identified as the most-likely place of birth of Andersen only near the end of his life. He denied knowing exactly where he was born and doubted that it could have been in such a hovel. Although he never hid his poor origins, he also preferred not to draw too much attention to his family’s loose morals that were very much out of kilter with the religious demeanor of respectable Danes of the mid-19th century.

The Art and Work of Hans Christian Andersen 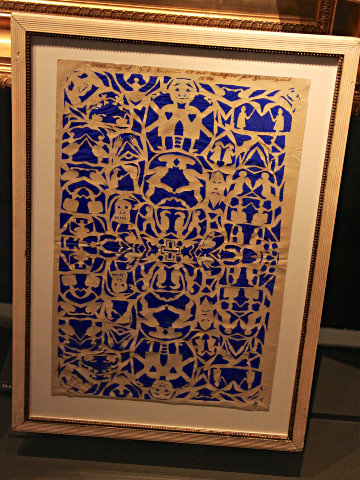 Hans Christian Andersen originally dreamed of being a novelist or playwright – and such works received a good reception in Denmark at the time – but he achieved most success with fairy tales. These were popular throughout Europe in his time and by now have been translated into at least 165 languages.

On display in the museum are also various art items of Hans Christian Andersen. He enjoyed drawing but more famously made paper cutouts and used such paper puppets when telling fairly tales.

Hans Christian Andersen final study – when he lived in Nyhavn in Copenhagen – has been reproduced and is furnished only with items he owned at the time of his death.

A memorial hall at the center of the museum was decorated in the 1920s by Niels Larsen Stevns with eight large frescos with scenes from Andersen’s life.

The Travels of Hans Christian Andersen 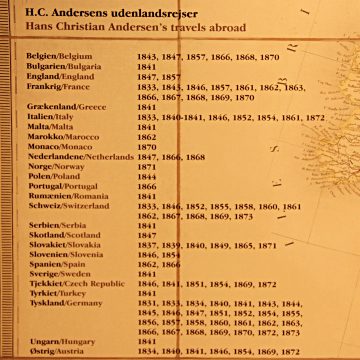 Hans Christian Andersen was an avid traveler and a large section of the museum deals with this travels and lively travel accounts. He left home, age 14, to travel to Copenhagen and although he primarily lived in the Danish capital his whole life, he traveled frequently and never owned his own property.

Hans Christian enjoyed staying at manor houses and it is calculated that he spend around five years of his life in Denmark’s large number of country estates and castles. He was often a popular guest as he entertained children and adults alike with his tales and stories but he was also a hypochondriac and suffered famously from toothache that he could go on about for days. 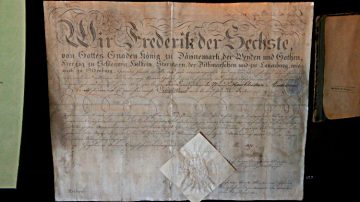 A special section is dedicated to his famous visit to Charles Dickens in England in 1857. He was expected for two weeks but stayed five. Once he had left, Dickens apparently wrote on the mirror “Hans Andersen slept in this room for five weeks – which seemed to the family AGES!”

On show is the 9-m rope that he always traveled with so he could rescue himself through the window should the house or hotel he stayed in caught fire. (He never had to use it.) He also at times place a notice next to his bed saying that he was sleeping and only seemed dead. 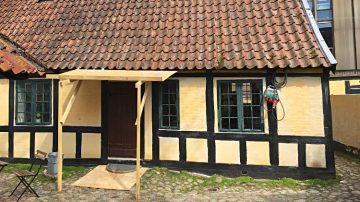 A short walk from the main museum, near the cathedral, is the small Hans Christian Andersen’s Childhood Home. Hans Christian lived here from age two until he left home aged 14. He described the house in some of his fairy tales.

There is little to see in this house, other than very basic furniture, confirming the basic poverty that Hans Christian grew up in. The most pleasant part of this little museum is the lovely garden in the back that was not there in the time of Andersen. Picnicking is allowed here. 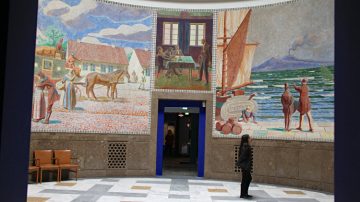 The main Hans Christian Andersen Museum in Odense will be closed from December 2017 until 2020 for the construction of a new museum designed by Japanese architect Kengo Kuma.

The museums are open on some holiday Mondays. 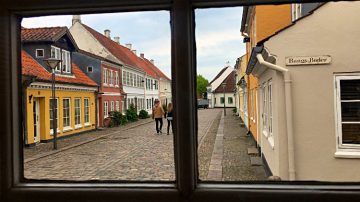 Admission tickets to both Hans Christian Andersen Museums are DKK95 to both museums on the same day and free for children under 18. The H. C. Andersen’s Childhood Home may also be seen individually for DKK30.

Discount deals are available on most museums in Odense: pay full price at the first museum and then save 30% on any further museums seen within a week. The H. C. Andersen’s Childhood Home is the cheapest so best visit first on this offer.

The main museum is the H. C. Andersen House (H.C. Andersens Hus), Bangs Boder 29, 5000 Odense C, in the northwestern parts of the old town center. It is a short walk from the train station with parking lots available to the north of the old town. (Major public road works in the center makes driving here highly inadvisable.)

It is less than ten minutes walk to the H. C. Andersen’s Childhood Home (H.C. Andersens Barndomshjem), Munkemøllestræde 3, 5000 Odense C, near the St Knud cathedral. The Q-Park Magasin parking garage is directly next to the museum.

See also Transportation to Odense from Copenhagen if visiting the town from the Danish capital. 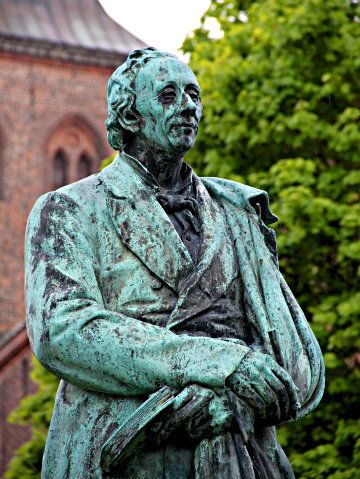 Danish King Knut was murdered in Odense in 1086. He was declared a saint soon after and for centuries his bones in the Sct Knud cathedral was the main attraction of Odense, until the mid-19th century the second largest city in Denmark.

However, in modern Odense, King Knud has been very much surpassed by Hans Christian Andersen. The town promotes a 3-km walk via sights associated with Andersen with the romantic, postcard-perfect neighborhood around the museum often referred to as the Andersen quarter.

The town has several Hans Christian Andersen statues. The most-famous is the large standing statue erected in 1888 in Kongens Have (King’s Park) behind the cathedral. 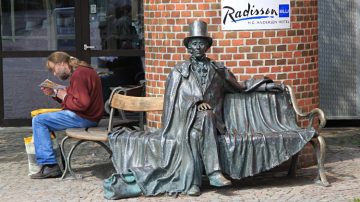 A seated Hans Christian Andersen at the Radisson Blu hotel is convenient for selfies (with hotel name strategically placed!).

The fine Den Fynske Landsby (The Funen Village) open-air museum in the southern suburbs of Odense is also often referred to as the Andersen Village, as much here resembles Denmark from his time. The old town area near his place of birth is also very popular and considered now very romantic rather than the slum it was two centuries ago. Also note the Møntergården local history museum – even if not going into the buildings take a look a the lovely historic buildings that form a large part of this museum.

Odense is a popular stopover when traveling between Jutland and Zealand (Copenhagen) but it is also a good weekend destination or even day-trip tour from Copenhagen.

A wonderfully romantic Renaissance castle with water moat, several museums and beautiful gardens is Slot Egeskov, half an hour to the south of Odense. It is very much in the spirit of Andersen’s tales but this is one of few Danish country estates that Hans Christian never slept at; he tried twice but the noble owner was not at home.