Harald Bluetooth’s Trelleborg is the best-preserved Viking ring fortress in Denmark and worth a stopover when driving from Copenhagen to Odense and Fyn. 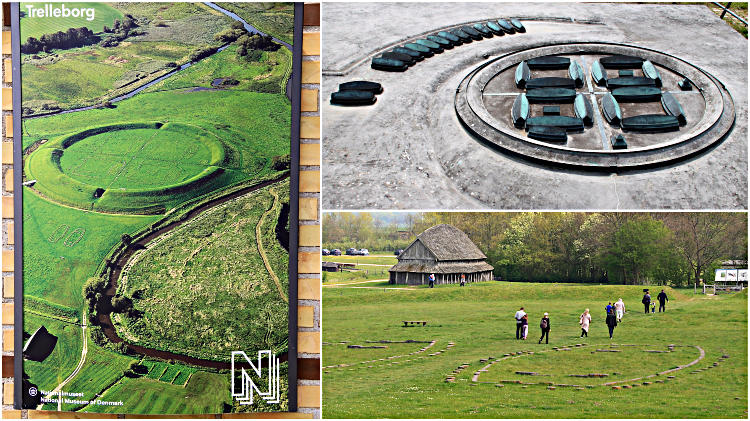 The Trelleborg Fortress is one of the best-known and most-important Viking-era sites near Copenhagen in Denmark. The main attraction is the well-preserved ramparts of the round Viking fortress erected by Harald Bluetooth in the late 10th century. A small museum explains the fortress system while a small Viking village gives an insight into Viking life – demonstrations during school holidays. A reconstructed longhouse shows how the Vikings lived. The Trelleborg works better as a stopover than as a day-trip destination on its own from Copenhagen.

Do not confuse the Trelleborg in Denmark with the Trelleborgen in Trelleborg, southern Sweden. The latter, is actually closer to Copenhagen, and has a reconstructed ring fortress.

The Trelleborg Viking fortress is an open-air museum that is part of the National Museum of Denmark. Visitors to this important Viking site see a small museum that explains the circular fortress construction and relevance, may hike on the surviving fortress ramparts, peak inside a reconstructed long house, and visit a small Viking village. 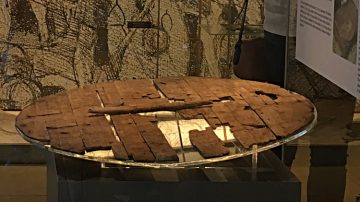 The Museet Ved Trelleborg gives a short overview of the ring fortress system and Viking life during the 10th century. The basic displays may be seen in a few minutes and it is well worth a quick look before moving on to the fortress itself. Most descriptions are in Danish and English.

Although Denmark’s best archaeological finds are in the national museum in Copenhagen, don’t miss the Trelleborg Shield (Trellebog-skjoldet) here. This 85-cm wooden shield is the only surviving Viking shield in Denmark. 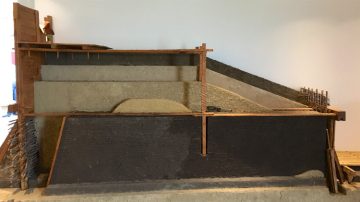 A wooden model gives an overview of the fortress with buildings but most interesting is the model showing how the original ramparts were constructed – complete with oak cladding that required the felling of half of all oak trees on Zealand. (Half a century later, the construction of Egeskov Castle had a similarly disastrous effect on the island Fyn.) Such expense alone is almost a guarantee that this was a major royal Viking castle.

It is a short walk from the museum building past a Viking-themed play area to the longhouse and the fortress ramparts. A small Viking village is to the opposite side of the museum and mostly active during school holidays but worth a quick peak to see typical Viking dwellings too.

The History of the Trelleborg Viking Fortress 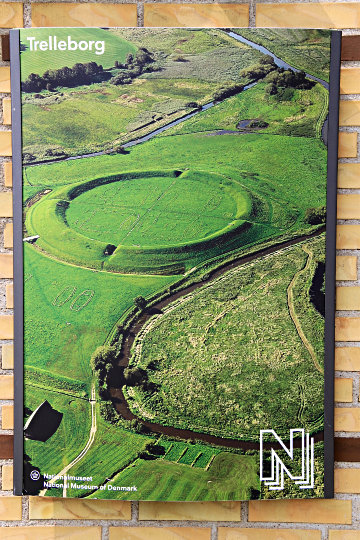 The Trelleborg on Zealand in Denmark is one of at least four Viking ring fortresses constructed by King Harald Bluetooth around AD980 to protect and strengthened his realm. A fifth ring fortress recently discovered near Køge was almost certainly also by Harald. Further ring fortresses are known to have existed during the Viking era but not all are attributed to Harald Bluetooth.

The Trelleborg is considered the best preserved of the ring fortresses and the only one with an outer rampart and bailey. The circular ramparts of the fort at Fyrkat (between Aarhus and Aalborg) are similarly in good condition while the Trelleborgen in South Sweden was reconstructed with wooden pile cladding.

Little about the ring fortresses is know for certain. No contemporary written records of these fortresses survived – partly as they were in active use for probably as short as 10 to 15 years. The fortresses were obviously expensive to maintain and were probably dismantled after the threat of rebellion was removed. Even the meaning of the name Trelleborg is unclear: it could simply mean wooden fortress but may also be an insult aimed at petty chiefs that were subjugated and enslaved by having the fortresses built on their territory. 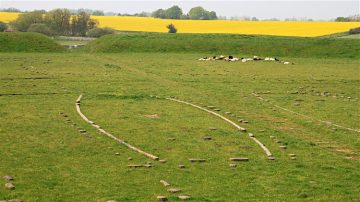 The dissolution of the Trelleborg was probably peaceful although the fortress was attacked violently at least once.

The existence of the Trelleborg fortress was know for centuries but was only excavated during the 1930s – largely to prevent a motorcycling club from turning it into a motocross track. The circular fortress ramparts were always known but the outer defenses only rediscovered when the site was viewed on aerial photos. 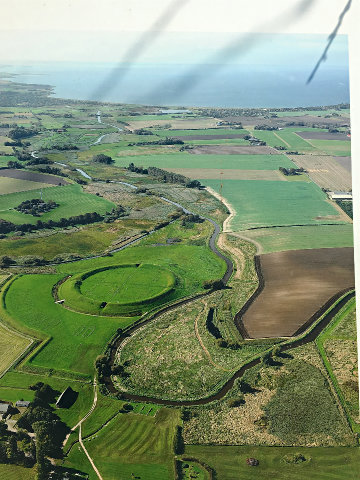 The Trelleborg fortress was built at the confluence of the Tude and Vårby Rivers – the land rising of Scandinavia means that the former rivers are now mere streams and the protective swamp mostly dry. The complex consists of a circular inner fortress with an outer rampart providing a further protective layer and bailey at the third side not protected by water.

(Land rising also explains why the prehistoric rock carvings of Bohuslän in Sweden are no longer at water level.)

The inner fortress at Trelleborg had of a perfectly circular rampart with a 136-m diameter and four access gates that were linked by wood-covered roads. This rampart is around 17 m wide and 5 m high and were made of earth, stone and timber. This circular rampart survived and is mostly freely accessible to visitors. 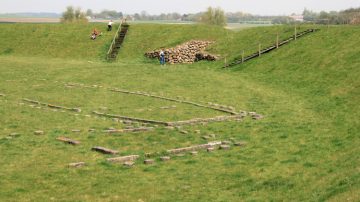 Originally, this rampart was covered by oak – almost vertical on the outer side with palisades and walkways on the top. It is estimated that half of the oak trees on the island Zealand must have been felled to accomplish this. The moat was dry but probably had wooden stakes and other obstacles to slow down attackers.

Inside the inner fortress were 16 long houses and a few smaller structures – concrete caps show some of the pole positions and outlines. 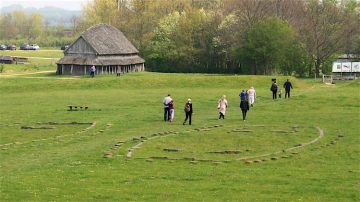 A further 15 long houses were positioned in the outer bailey and were probably workshops rather than residential accommodation. It is estimated that 500 to 800 people lived in the fortress at any given time, although up to 1,300 may have been possible.

The long houses used a uniform structure – 29.42 m long and 7.90 m wide with a bit of bulging on the sides. Most had a large, 18-m-long central hall with two smaller gable rooms. The reconstructed long house uses the correct floor plan but is probably a bit higher than it would have been during the Viking era.

Visitor’s Information for the Trelleborg Fortress in Denmark 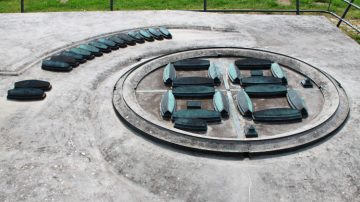 There is not that much to see at the Trelleborg so the Viking fortress alone is probably not worth a day-trip from Copenhagen (except during the Viking festival in July) but it is a very pleasant stopover when traveling in the region. It is only a few minutes off the highway E20 that connects Copenhagen and Zealand with Fyn / Funen (Nyborg, Odense) and ultimately the Jutland peninsula. 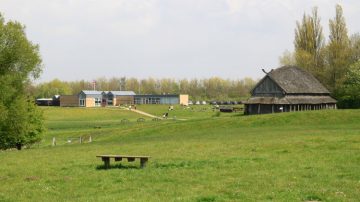 Admission to the Trelleborg fortress, small museum and Viking village is free. Admission is only payable for special advents such as the very popular Viking festival held annually in week 29 (mid July), with a market, demonstrations and staged battle re-enactments.

The Trelleborg fortress and museum are open Tuesday to Sunday from April to October from 10:00 to 16:00 (closing at 17:00 in June, July and August). The Trelleborg is open on some holiday Mondays.

Outside the normal opening hours, some parts of the terrain may still be accessed freely. Camping is allowed in the area near the museum during the season (small charge apply).

Visiting the site involve some hiking on unpaved routes – wear appropriate shoes, especially when it is wet. Sheep keep the grass short but leave lots of droppings.

Transportation to the Trelleborg Viking Fortress 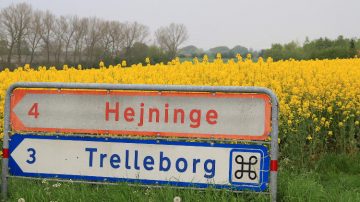 Getting to the Vikingeborgen Trelleborg, Trelleborg Allé 4, Hejninge, 4200 Slagelse, on the island Zealand in Denmark is easiest by car – from highway E20 use exit 40A Slagelse (if arriving from Copenhagen) or 40B Vemmelev (from Nyborg / Funen direction). The final few kilometers are on very minor roads but well signposted.

Public transportation is possible but buses often run only during the school terms and not over weekends. Special services are possible during the Viking festival week. Cycling the 20 minute / 7 km from Slagelse train station may be a more reliable option.

By public transportation, use the train to Slagelse station – a stop on many trains between Copenhagen and Odense, and then on bus 439 to the Trelleborg Allé stop near the fortress. Check times before setting out, as only a few buses per day are available. Resjeplanen.dk has an English option – use Trelleborg Allé as destination stop.

Other Viking Sites in Denmark 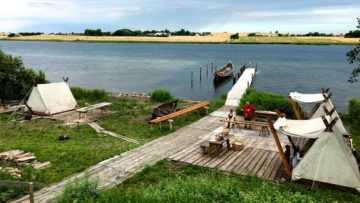 The top Viking sites on the island Zealand are the Viking Ships Museum in Roskilde and the treasure trove of Viking (and pre-history) archaeological finds in the National Museum in Copenhagen. Previously a simply boat ride, but nowadays a more expensive car ride over the very impressive Store Bælt Bridge to the island Fyn / Funen, is the Ladby Viking Museum with the only preserved Viking ship grave in Denmark.

The top Viking sites in Denmark are arguably on the Jutland peninsula and include the Royal Jelling area, the Fyrkat ring fortress, and the very impressive Moesgaardmuseum (fantastic pre-history displays) near Aarhus.