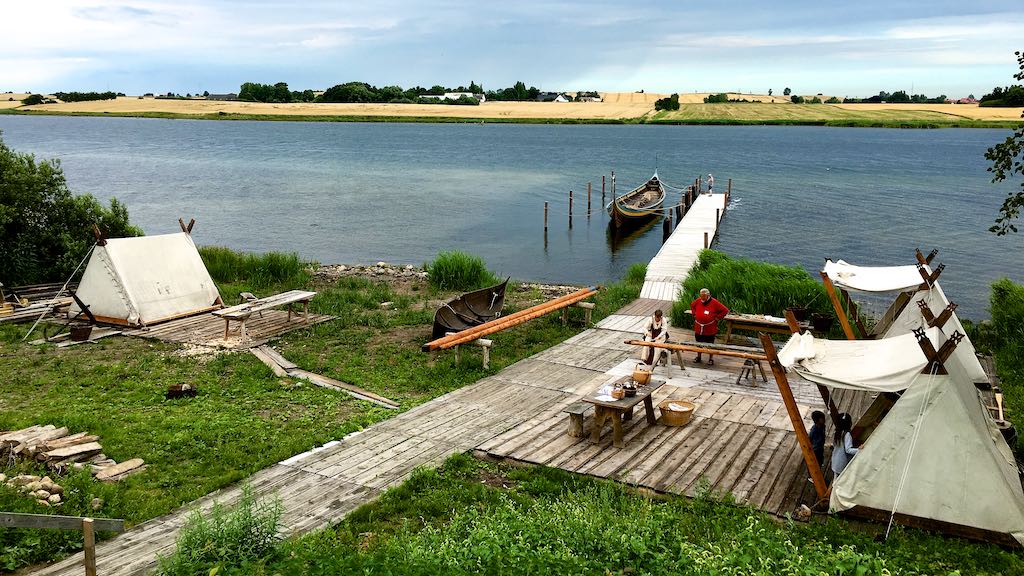 The Vikingemuseet Ladby in Denmark is the only place in the world where a Viking burial ship may be seen in its original position inside a burial mount. This is also the only burial ship in Denmark that survived from the Viking period. In truth, very little of the Viking king’s burial ship survived. Visitors see mostly the imprint left by the planks – the wood long since rotten away – but the site is still absolutely worth visiting. The burial ship in the mount is very well presented, the small museum informative and the Viking ship replica showing what the original could have looked like. The Viking Museum Ladby is on the Danish island Fyn not far from Odense and Nyborg making it a great stopover when traveling between Copenhagen on Zealand and other sights on Fyn or en route to Jylland (Jutland). 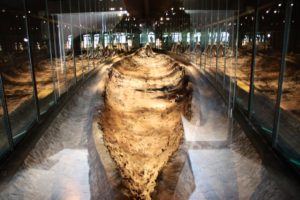 The only Viking burial ship still in its original location in Scandinavia is at the Vikingemuseet Ladby. This is also the only Viking ship grave that survived in Denmark.

Of course, these claims somewhat oversold Ladby but it is still a very impressive sight. Rather than Viking boats such as may be seen in Oslo and Roskilde, the “boat” here is mostly the imprint left by the original planks that have rotten away and around 2,000 rivets. It is actually very impressive that this imprint and a few minor objects survived.

The Viking burial ship of Ladby contained the grave of an unknown king, or very senior nobleman, from the early 900s. Here a king was buried in a dragon ship measuring 21.5 m by 3 m together with 11 horses and 3 or 4 dogs. The grave was covered by an earth mound but was plundered already during the late Viking era. Only a few items survived: the bones of some of the horses, some metal studs and the original anchor with chain are still on show in the boat imprint while other small items are preserved inside the museum.

The burial ship was re-discovered in 1935. A concrete dome was erected to protect the imprint while a concrete floor was added recently to protect the imprint from ground water and moisture movements. Visitors walk into this dome and may walk around the boat imprint that is protected by glass but beautiful lit to reveal amazing detail. 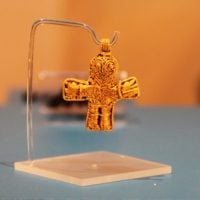 The small museum has a permanent display on Viking life in general and usually further temporary exhibitions on related issues. During 2016, these temporary exhibitions included amongst others a display of Viking fashions – there were snazzy dressers, especially the men – and valuable Viking-era finds (that are likely to end up in the permanent collection of the National Museum in Copenhagen).

The permanent displays explain in some detail the use of grave mounts, the Ladby burial ship in particular, Viking society, and boat building. A few of the smaller items that were discovered with the boat, such as the metal curls that formed the manes of the dragon, iron arrow heads, spurs and stirrups, and a games board are on display inside the museum. 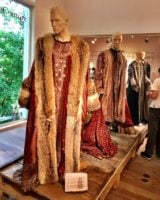 For many displays, only a summary is given in English (and German) but most visitors should be able to get the gist of what is on display. As is often the case in Danish museums the descriptions are entertaining:

In the basement of the museum is a simple but full 1:1 scale model of the Ladby burial ship. It shows the death boat with the body of the king as well as the 11 horses and four dogs that were offered. Video images, using traditional Viking symbols, explain the Viking view of the world, life and death.

A tapestry, inspired by the famous Bayeux Tapestry, is slowly being finished at the museum. It is 7 meters long and takes the year 925 as the center of its story. 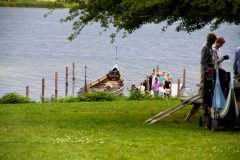 Out on the Kerteminde Fjord below the burial mount is a full floating replica copy of the Ladby Viking grave ship. The Ladby Dragon, launched in 2016, was built over five years near the museum using original techniques and local oak.

The ship is painted blue and yellow – colors that were found during the 1935 excavation of the burial mound. 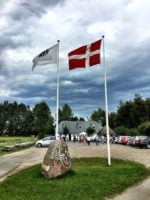 Admission is DKK60 for adults and free for under 18-year olds.

English and German translations are available for most exhibition descriptions.

Extra activities are often scheduled in July and on Wednesdays. 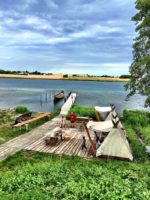 The museum is on the island Fyn near the city Nyborg and to the east of Odense. It is a 20-minute drive from the highway E20 that links Copenhagen with Odense and Jutland.

Other major Viking museums and sites in Denmark include the Trelleborg Viking ring fortress (on the island Zealand en route back to Copenhagen), the magnificent Viking Ships Museum in Roskilde, the National Museum of Denmark in Copenhagen (that tends to get the best pieces), and the fantastic Moesgaard Museum near Aarhus. Viking festivals and battle re-enactments are also popular in Denmark and most common during July.