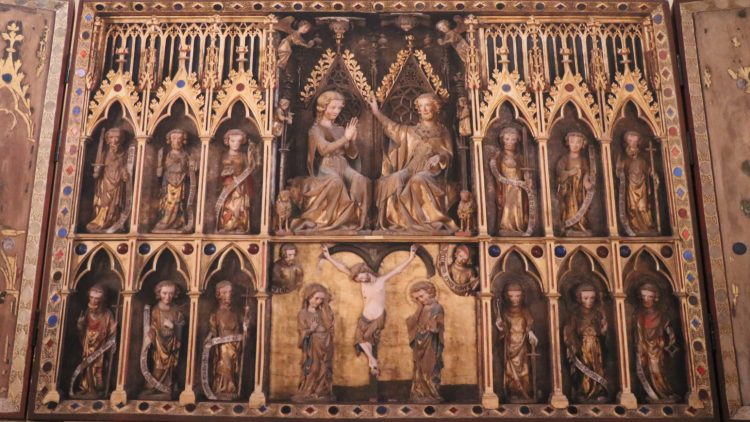 Photo of a photo of the Rossower Altar

In preparation for the 850th anniversary of the Dom in 2020 — postponed until June 2021 — a large full-sized photo showed the winged altar that stood in the choir from 1411. This Marienaltar (Altar of the Virgin Mary) has the coronation of Mary at the center.

The altar was removed from the church after the Reformation and since around 1607 stored in a small village church in Rossow near Wittstock.

The Havelberger Marienaltar — now known as the Rossower Altar — was damaged through the centuries, but the central scenes survived in fairly good condition, although the crown of Mary has disappeared.

A remarkable feature of this retable is the inclusion of Judas Iscariot in the traditional rows of the disciples (bottom row first on the right). To preserve the symmetry, Judas is usually replaced in such lineups by Mathias (or Paul or John the Baptist or another saint) and only shown in scenes such as the Last Supper and the betrayal in Gethsemane.