Sightseeing and pleasure boats cruises depart daily on Lago di Lugano in Ticino in Switzerland and the Italian lakes region. 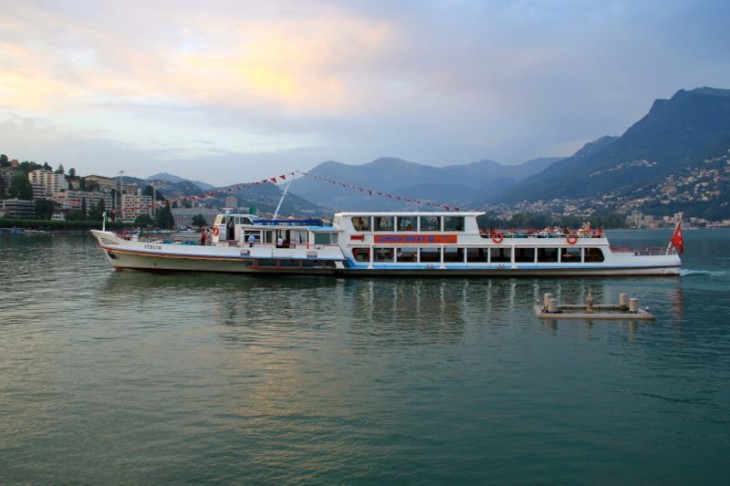 Boat cruise excursions on Lake Lugano are a great way to explore this beautifully located lake in Ticino (Tessin) in the south of Switzerland and north of Italy. Pleasure boat excursions are mostly round-trip cruises from Lugano and Paradiso to various smaller towns and sights on the banks of the lake. Visiting small lake towns, restaurants, museums, mountain railways, and hiking are amongst the popular activities that combine well with pleasure cruises on Lago di Lugano. No car ferries operate on Lake Lugano.

The summer cruise season on Lake Lugano is from April to late October. 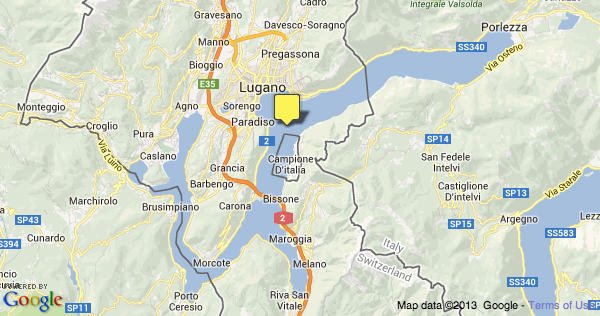 Lake Lugano is beautifully located in the south of Switzerland with arms extending into northern Italy. The lake has an irregular shape with arms protruding in various directions between hills making an excursion boat the ideal way to explore this region.

In summer, up to 24 boat cruises depart daily on mostly circular round-trip cruises from Lugano and Paradiso with stops at various ports and sightseeing spots on the shores of the lake. Boats cruise daily with additional dinner and music cruises available Tuesday to Sunday during July and August.

Cruising on Lake Lugano in Switzerland and Italy

Pleasure boat day cruises on Lake Lugano follow two main routings: Tours in the Bay from Lugano to Gandria and southwards from Lugano to Porto Ceresio, Ponte Tresa or Capolago. Almost all cruises start and end in Lugano with a stop in nearby Paradiso with its large number of tourist hotels.

The Tours in the Bay cruises usually depart from Lugano, call at Paradiso within ten minutes before continuing to Gandria. Depending on the specific cruise, the boat calls at various stops e.g. the Museo Heleneum (Cultural Museum) and the Museo Dognale (Customs Museum) with cruise duration from around 30 to 45 minutes. One boat per day goes all the way to Porlezza (1h30) in Italy with returns possible by bus.

The southbound cruises usually starts in Lugano (times from Lugano) with a stop in Paradiso (0:10) before continuing to Campione d’Italia (Casino) (0:20) and Melide Swissminiature (0:30). Most boats continue to Ponte Tresa (1:45) with stops en route at Marcote (Parco Scherrer) (0:50) and Porto Ceresio (1:00) with further stops at smaller town depending on the specific cruise. A few boats per day go directly from Melide to Capolago (Monte Generoso) (0:50). 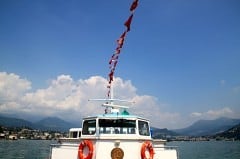 During July and August, dinner cruises with music departs daily from Lugano and Paradiso for around an hour and a half cruise.

Boats (and passengers) pass in and out of Italy and Switzerland freely although customs checks are possible at any time. No car ferries operate on Lake Lugano – the lake can be crossed by bridge at Melide to the south of Lugano. 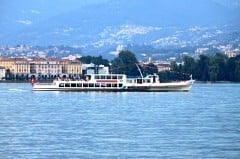 Tickets for Lake Lugano pleasure cruises are available from the ticket windows at the main stops (Lugano, Paradiso, Morcote, and Ponte Tresa) or directly on board if paying in cash. Payment is possible in Swiss franc or euro.

A day ticket is CHF49 while children 6 to 16 pay half fare if not using the Junior Card. The Swiss transportation Half-Fare Card (and similar) gives 40% discount. An hour circular Tour of the Bay is CHF28 or a Grand Tour (1:45) is CHF46, while point-to-point tickets are of course available – returns are usually significantly cheaper than two singles.

Combination tickets with sights in the Lugano region are available and often give large discounts. It is also possible to return by bus or train from many ports if preferred.

Drinks and small snacks are served on all boats. Full sit-down meals are only available on a few boats on the southern routes. Food, even on the dinner cruise, is additional and not compulsory. Picnicking is allowed outside the restaurant areas (and a sensible idea for the budget conscious).

More on the Lugano Region: