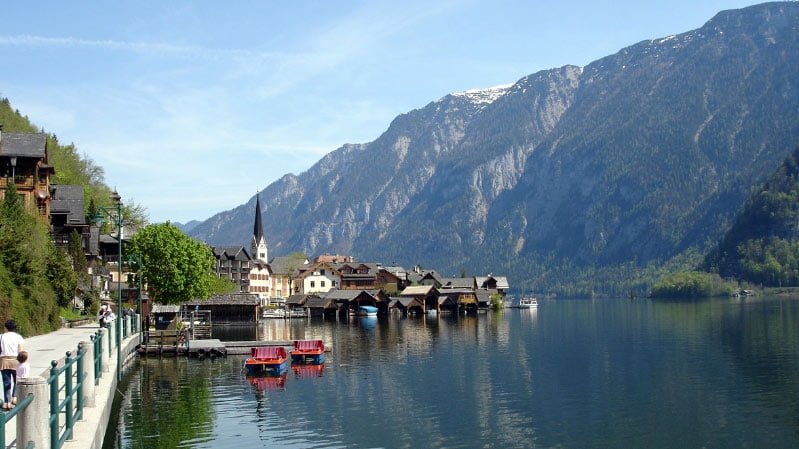 Salzburg, Austria is the birthplace of composer Wolfgang Amadeus Mozart. The beautifully located town is included on the list as an excellent example of a European city-state ruled by a bishop. The old town has numerous ecclesiastical and secular buildings from the Middle Ages to the 19th century.

Baroque Schönbrunn Palace at the western outskirts of Vienna was built to rival Versailles with a sumptuous palace and huge park. Schloss Schönbrunn served as primary summer residence of the Habsburg family from the 18th century up to 1918.

The village of Hallstatt has a superb location at the feet of the Dachstein peak on the banks of the Hallstatt Lake. However, natural beauty has to take a back seat here. The main reaons for Hallstatt’s UNESCO listing are the importance of the prehistoric Hallstatt civilization and the exploitation of salt, a source of wealth in the Salzkammergut area from the second millennium BC to the mid-20th century.

Semmering Railway (added to the UNESCO World Heritage List in 1998)

A superb feat of mid-19th-century engineering, the Simmering 41-km (25-mile) railway line opened isolated Alpine valleys to modern commerce and tourism. Many original viaducts and tunnels are still in daily use.

Austria’s second largest city has an historical town center famous for blending architectural influences from the German-speaking world, Balkans, and Mediterranean. Graz also harmoniously blends styles from the Middle Ages to the present.

The Wachau Cultural Landscape incorporates the Danube Valley from Melk to Krems (upstream from Vienna). In addition to the area’s natural beauty, it has numerous interesting towns and architecture, including the famous Baroque monastery Melk (pictured).

The UNESCO listing of the Neusiedlersee lake is shared by Austria and Hungary as it has been the meeting place of different cultures for eight thousand years. The area has numerous 18th and 19th-century palaces and unique rural architecture.

With a history going back to Celtic settlements, the historic center of Vienna City has an interesting blend of architecture with Gothic, Baroque, and 19th-century Gründerzeit buildings particularly prevalent. It has been Europe’s musical capital since the 16th century and musical performances form an integral part of life (and vacations) in this beautiful city.

A collection of 111 Neolithic and Bronze Age sites (5000 to 500 BC) in the Alpine region. (Shared with Switzerland and other Alpine nations.)

A further 13 Austrian properties are on the tentative list for inclusion on the list, although some of these have been on the waiting list for over two decades.