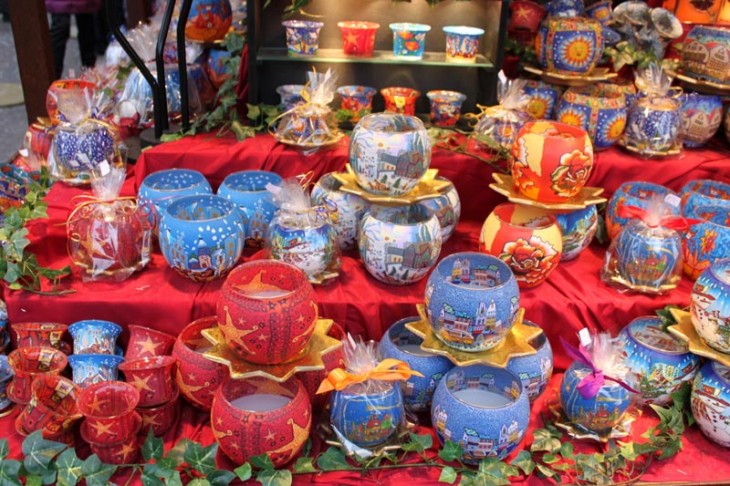 Driving from the UK to Christmas Markets in Germany

Traveling from the UK by car to Germany presents no major hassles other than having to drive on the opposite side of the road. Roads are generally in very good condition and apart from highways in France mostly free from tolls.

Traveling by car to Christmas markets in Germany has the convenience of being able to travel to small towns with ease. Shoppers will enjoy no luggage charges and no restrictions on carrying liquids, glass, and other sharp objects back home.

However, drivers to larger German cities have to note that foreign cars are not exempt from the requirement to display a Feinstaubplaketten (sticker) when entering a Low-Emission Zone (LEZ / Umweltzone). The centers of Cologne, Düsseldorf, and Frankfurt am Main for example have such zones while Aachen and towns along the Mosel River generally do not.

Calais is the European port of entry for most British drivers arriving on the European continent. Most ferries between Britain and Europe are on the Dover to Calais route, e.g. DFDS Seaways, P&O Ferries, and My Ferry Link. Using the Eurotunnel is of course also a good option – it is usually faster than a ferry but costing often substantially more.

Driving times and distances in kilometer (miles) from Calais to major German cities with Christmas markets in the western parts of Germany include:

Passengers on the Hull to Zeebrugge (Belgium) ferries (P&O Ferries) can reduce the above driving times by almost an hour and 100 km (60 miles). Dover to Dunkirk ferries operated by DFDS Seaways allow drivers to arrive around 50 km (30 mi) closer to Christmas markets than from Calais. Ferries arriving at Ostend from Ramsgate (Transeuropa) allow savings of almost 100 km over Calais.

Driving via The Netherlands to German Christmas Markets

Car ferries to The Netherlands are also useful to British travelers, especially those traveling from regions to the north of London. The car ferry (Stena) from Harwich to the Hook of Holland (Hoek van Holland) is also useful for rail travelers from London and the overnight service is particularly popular with children and families.

Driving times and distances in kilometer (miles) from the Hook of Holland to major German cities with Christmas markets in the western parts of Germany include:

Further car ferries arrive in the Netherlands at Ijmuiden (Amsterdam) from Newcastle (DFDS Seaways) and Rotterdam from Hull (P&O Ferries). Driving times and distances from these ports to Christmas markets in Germany are practically the same as from the Hook of Holland.