Coaches and tour bus package deals are cheap ways to travel from London and England to Christmas markets (Weihnachtsmärkte) such as Cologne (Köln) and Aachen in Germany. 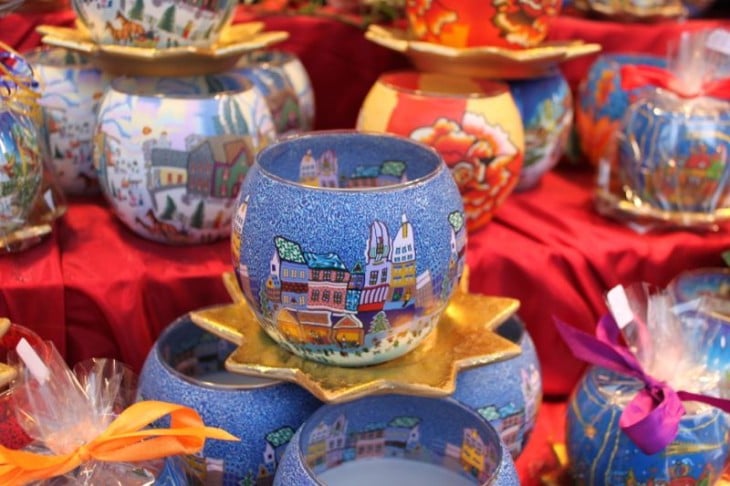 Touring buses and coaches often offer the best package deals and cheapest tickets when traveling from London, England, and the rest of the British Isles to Christmas markets (Weihnachtsmärkte) in Germany. Regular bus services operated by Eurolines (including Deutsche Touring and National Express) run between London and various German cities including Aachen, Cologne, Düsseldorf, and Frankfurt am Main. However, the best deals are usually local touring operators running special German Christmas market tours from towns and villages all over the United Kingdom.

Not surprisingly, due to the slowness of bus travel, the most popular Christmas markets for coach passengers from the UK are those in the western parts of Germany. Cologne (Köln) and Düsseldorf are large interesting cities with huge Christmas markets while touring bus groups also visit smaller towns along the Rhine and Mosel rivers with smaller, more intimate markets with a romantic atmosphere.

For solo travelers using regular international buses, Cologne is a favorite destination. Not only are the bus connections frequent and reasonably fast, but Cologne does not only host several large Christmas markets but also has a lot to offer visitors in terms of entertainment, culture, and gastronomy.

Other German cities with large Christmas markets easily reached by coach from Britain include Aachen on the German-Belgian border and Düsseldorf a bit further downstream on the Rhine River from Cologne. Due to its proximity to the Dutch border, Düsseldorf is hugely popular with bus parties from the Netherlands.

Cheap Eurolines Buses from London to Christmas Markets in Germany

Eurolines / National Express has numerous bus services from especially London to many cities in Germany. Travel times are much slower than trains or flying but ticket prices are often cheaper making coaches the cheapest way to travel from the UK to Europe.

Eurolines buses run usually overnight and cross to the European mainland by ferry or via the Channel Tunnel. Traveling time from London to Cologne and Düsseldorf are around 12 hours with Aachen 90 minutes closer to England. Traveling time by bus to Frankfurt am Main can be as long as 15 hours.

In Germany, bus services between cities are very limited and most travelers have to continue by train to their final destinations. In England, special cheap deals allow travelers to reach London cheaply on National Express coaches when continuing with Eurolines on to Europe.

The Cheapest Coach Tours from England to German Christmas Markets

The cheapest way to travel from the UK to Christmas markets in Germany is to book touring bus trips and excursions. These package deals usually include bus transportation and hotel accommodation in Germany. The quality of the hotels used in the package deals is often the main determining factor in the ultimate price.

The cheapest package deals and tours to German Christmas markets are often not available through online reservation booking services or even high street travel agencies. Smaller, independent coach companies in many British towns run the cheapest excursions in December to Christmas markets – the local press, rather than the internet will often show the best deals and lowest prices.

A great advantage of these tours are not only the cheap prices but that visitors often travel to small Christmas markets in smaller towns as well. Touring operators know when markets in small towns are held – often only on a few weekends – and these markets may be much more interesting and romantically located than the huge markets in large cities. These tours depart from smaller towns in Britain too and cut out the need to travel first to London or other major English cities with international coach services to Europe.

Trains to Germany are a great alternative to coaches when traveling to Christmas markets in the Rhinelands. Trains are faster and much more convenient and special deals are often available for advance reservations. Cheap flights to Germany depart from many UK airports and are generally more sensible for travelers to cities in the north, south and east of Germany especially for British passengers departing far away from London. Driving to Christmas markets is also an option.