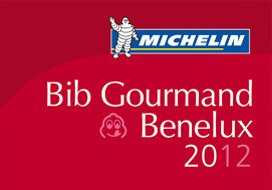 Michelin’s 2012 Bib Gourmand Benelux red guide to top affordable restaurants lists 242 restaurants in Belgium, the Netherlands, and Luxembourg where diners can enjoy excellent three-course menus for cheaper than €35. For 2012, Michelin has added 39 new restaurants to the list while 25 were deleted.

In contrast to Michelin’s Belgium and Netherland’s Hotel and Restaurant red guides, the Michelin’s Bib Gourmand Benelux 2012 is a guide of only 242 restaurants given the Bib Gourmand award. The guide is available in French and Dutch (Flemish) but picture symbols will help other readers.

In contrast to the Michelin star restaurants, where the quality of the food reigns supreme, the emphasis for bib gourmand restaurants is a combination of quality dishes and affordable prices. For Belgium, the Netherlands, and Luxembourg,  Michelin’s bib gourmand criteria are an excellent three-course meal (starter, main course, and dessert) for cheaper then €35.

Michelin added 39 new addresses to the Benelux 2012 Bib Gourmand guide while 25 were dropped. Michelin clearly hopes that some ruthless culling will help to keep the listed restaurants on their toes to not drop standards (or raise prices) once featuring on the bib gourmand list. For gourmets, it is also a good reason to stay up to date with the newest guide.

Although restaurants from many smaller towns are included, major cities feature prominently on the list. According to Michelin, the best cities for quality dining at affordable prices are Brussels (25 restaurants), Antwerp (9 restaurants) and Amsterdam (12 restaurants). Antwerpern / Anvers alone added four new restaurants while Dutch cities Amsterdam and Maastricht added three each.

Restaurants in Michelin’s Bib Gourmand guides receive more comprehensive write ups than in the standard hotel and restaurant red guides. However, readers unable to read French or Dutch will have to rely on pictograms and may find better value out of the standard full country red guides.

and around $19 from Amazon USA