Mechelen near Antwerp has eight historic churches filled with art including paintings by Rubens and Van Dyck, Baroque wood carved pulpits and statues. 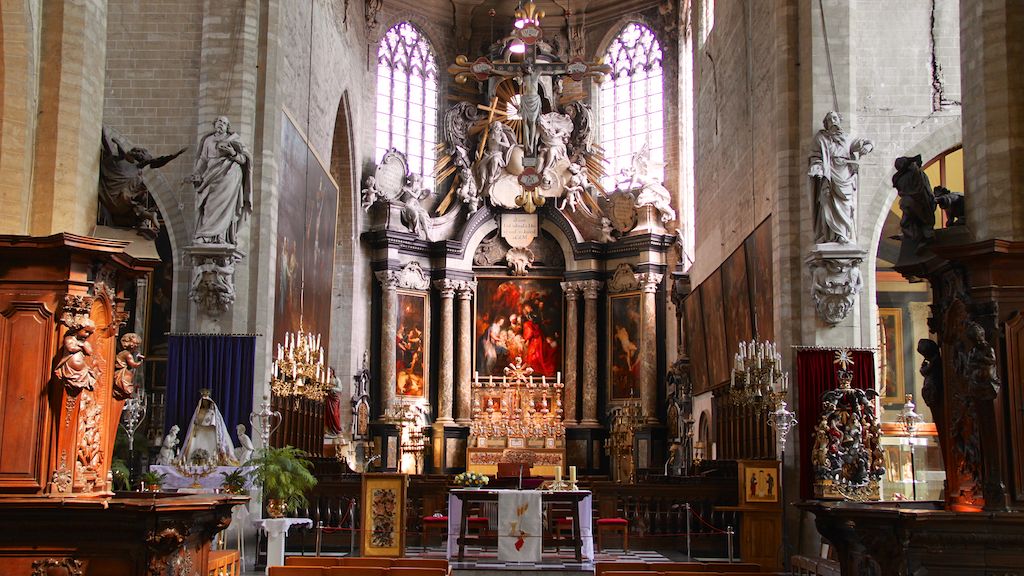 Mechelen has eight important churches full of art in its historic old town. Mechelen was an important town in the Middle Ages and experienced a further cultural Golden Age during the Baroque leaving this small university town with amazing art treasures. Some of the best art can be seen for free in the eight historic churches within walking distance of each other in the town center. Works on show include paintings by Peter Paul Rubens and Anthony van Dyck, intricately carved Baroque pulpits and church furnishings by Michiel Vervoort, Theodoor Vehaegen and Pieter Valckx and statues (and designs) by Lucas Faydherbe. Many stained-glass windows were damaged during the world wars but the Brabant Gothic and Baroque architecture generally remain intact. 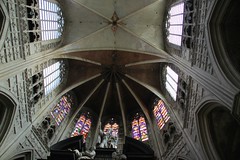 The eight historic churches in the center of Mechelen are open for free every afternoon, except Wednesday, from 1 pm to 4 pm (5 pm from April to October). Some have longer opening hours. Wednesday, rather than Monday, is currently the closed day for most Mechelen cultural sights.

If time is limited, give preference to the cathedral, St Janskerk and Our Lady Across the Dijle. The latter two both have triptychs by Rubens. 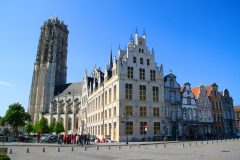 St Rumbold’s Cathedral is not only the largest church in Mechelen with the most impressive belfry but is also filled with art. It is named after Sint Rombout (Rumoldus), an Irish missionary who is credited with converting much of Brabant to Christianity during the 7th century.

Mechelen’s Brabant Gothic triple-nave cathedral dates mostly from the 15th century but parts are up to two centuries older. Although completed well before it became a cathedral in 1559, and currently the metropolitan cathedral of Belgium, it from the beginning was built to impress:

Although much of the interior was lost during the Religious Wars of the 16th century and further plundering by the French in 1792 and 1794, the interior of the cathedral is still filled with mostly Baroque art. 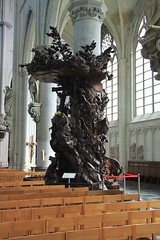 St Rombout has been described as the mostly masculine church in town, as male figures feature prominently, in contrast to the emphasis on the Virgin Mary in most other local churches. Apart from the statue of St Rumbold on the main altar and his relics in the altar, many statues and mausoleums of archbishops decorate the church.

Top artworks in the Mechelen cathedral include: 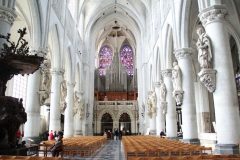 The cathedral is usually open daily from 9 am to 4:30 pm (5:30 pm April to October). Enter through the side doors early morning. 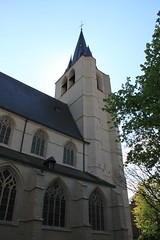 Visitors approaching the St John the Baptist and the Evangelist Church (Sint Jan De Doper en Sint Jan De Evangelist) from the wrong side may debate whether it would be worth the effort to walk to the opposite end to find the entrance. The exterior of this Gothic church, although recently restored, is surprisingly plain and looks deceptively unpromising.

However, inside the outwardly unassuming and fairly small church has the richest church interior in Mechelen. Artistically, it competes on an even keel with the Cathedral, as this church was in the parish of the richest citizens who spent lavishly during the Baroque period after peace and stability had returned to region. 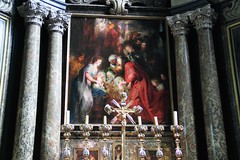 The most famous work in the Janskerk is The Adoration of the Magi – a triptych by Peter Paul Rubens, who finished the work in person in the church in 1617. (The church paid in installments until 1624.) The Virgin’s face is that of Rubens’ first wife, Isabella Brant. The side panels show very graphically the martyr deaths of St John the Baptist (decapitation) and St John the Evangelist (boiling oil) while the reverse sides have the baptism of Christ and St John on Patmos.

The French confiscated the Rubens paintings in 1794. While the triptych returned, two of the three painting Rubens made for the predella – the resurrection and the adoration of the shepherds – are still in the Musée des Beaux-Arts in Marseille. The Crucifixion is considered original and from the workshop of Rubens. 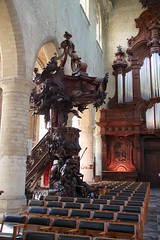 Furthermore, all major Mechelen artists from the 17th and 18th centuries are represented here, including amongst others these sculptors:

Two large 14th-century wall paintings were discovered in 2008 on the second level of the towers. These paintings of St Christopher and St Joris may only be seen on a guided tour by the Tourist Office. 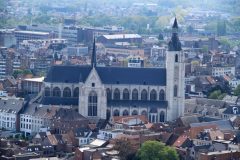 Our Lady Across the Dijle River is the second largest church in Mechelen. It is another fine example of Brabant Gothic and dates mostly from the 14 th and 15th centuries. The church suffered major damaged in both world wars in addition to being plunder during earlier wars and upheavals.

Traditionally, this church could compete with the cathedral not only in size but also in wealth. Many guilds and trades had their own altars here – the most famous and still on display is the 3-m tall triptych The Miraculous Draught of Fish by Peter Paul Rubens painted in 1620 for the Fishmongers’ Guild. (This guild was housed in the nearby 16th-century Huis de Zalm on Zoutwerf with a golden salmon over the door.) 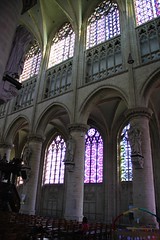 Other notable artworks in Onze Lieve Vrouw Over de Dijle include:

However, most of the church interior and all the historic stained-glass windows were blown out during the Second World War. The colored glass installed during the 1960s provides a lovely color play on sunny days that beautifully lit up the Gothic architecture and decorative style elements.

The rich interior of the Baroque St Peter and Paul Church in Mechelen is unique in having the only mostly intact original Jesuit interior in Dutch-speaking Belgium.

Unfortunately, the church is currently closed for renovation. 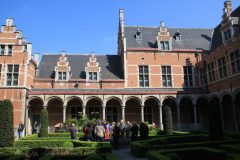 However, do go a few houses down Keizerstraat and take a peak into the lovely garden courtyard of the Palace of Margaret of Austria – a most remarkable woman, who ruled the Netherlands from 1507 to 1530 for her nephew, Holy Roman Emperor Charles V. This 16th-century palace was one of the first Renaissance buildings in northern Europe and now houses law courts.

The Church of Our Lady of Leliendaal is a 17th Baroque church that was part of the Norbertine (Premonstratensian) monastery. It was the first major solo architectural project of Lucas Faydherbe.

The church was stripped of most of its treasures during the French Revolution and Napoleonic Wars. The interior is thus mostly modern although the basic structure remains Baroque. The lovely original pulpit is now in the cathedral.

The Jesuits have used the church since 1900. The decorations and art such as the statue of Ignatius Loyola and the imagery of Mary are typical for this order. Artistic highlights in this church include the altar by Lucas Faydherbe and Artus Quellinus and some low reliefs.

The 17th-century Basilica of Our Lady of the Hanswijk area combines a triple nave with one of the first domes in the Low Countries. Lucas Faydherbe designed the church but the foundations were not strong enough to carry the weight of the much taller dome that he intended. The rotunda has a diameter of 15.5 m and the dome rises to 34 m.

Central to the church is a Mary statue that has been venerated since 988 – although the present statue is only from the 16th century. Pope John Paul II prayed here in 1985 and named the church a Basilica Minor two years later.

Noteworthy art in the church include: 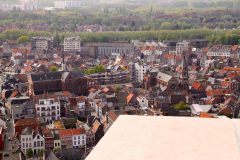 The 14th-century Gothic Katelijnekerk (St Catherine’s) was built in an originally poorer part of Mechelen and both the architecture and art are thus less lavish than elsewhere in town. This state continues to the present, especially as the nine Old Masters paintings were lost at the start of the First World War.

However, the furnishings, especially woodcarvings are noteworthy. The Joseph Altar is by Lucas Faydherbe (1617-97) while the pulpit designed by Verhaegen (1701-59) but sculpted by Pieter Valckx (1734-1785) and confession stalls by Nicolaas Van der Veken (1637-1704) are typically for the region highly decorative, even when not as refined as in the cathedral or St Janskerk. The 19th-century stained-glass windows show scenes from the life of St Catherine.

The 17th-century church of the Begijnhof, officially Sint-Alexius-en-Catharinakerk, is known as the most feminine church in Mechelen. In contrast to the Rumbold Cathedral where men dominate, this church is filled with female symbols.

Particularly noteworthy is Our Lady of Sorrows by Lucas Faydherbe. (The relief of God the Father on the top gable is also attributed to him.) The church has around 50 paintings from the 17th century that are alternated frequently. The interior paintwork in pink, light blue, turquoise and beige is from 1910.

The church is with the actual béguinage inscribed on the UNESCO World Cultural Heritage list (together with similar ones in Belgium and The Netherlands).