Getting to Versailles with its palace (chateau) and formal gardens is easy from Paris by bus tour, cheap RER train C5 public transportation, or by car for a great day trip to a top sight in France.

Visit the Palace of Versailles in 2022

In 2022, the Palace and entire Estate of Versailles are open on the usual days and hours but time-slot admissions are now compulsory to see the main palace, even for free admission and other ticket holders. Buy tickets online from Tiqets or GetYourGuide — easy cancelation options are available. Guided tours from Paris remain an easy option for transportation and fast palace entry.

NOTE: For much of summer 2022, until at least August 20, no RER C trains will connect Paris and Versailles. Other public transportation options — see Other Trains below — are rather cumbersome making guided bus tours from Paris in summer 2022 a very sensible option.

Public Transportation to the Palace of Versailles or a Bus Tour from Paris?

Getting to Versailles from Paris by train is very easy even for inexperienced travelers. However, taking an organized tour by bus or shuttle from Paris to Versailles can be sensible even for experienced travelers during busy periods (and during transportation strikes!) Advance purchase tickets for the chateau including the Paris Museum Pass allow visitors to skip the ticket line at the chateau but not the queue for entering the palace itself. On busy days, an organized tour is an easy way to get into the palace without queuing.

Tour bus excursions and day trips by shuttle bus from Paris to Versailles are offered by many companies and are easy to book, e.g. Get Your Guide. Do compare prices though as the offers vary widely. It may even be sensible to book an excursion to get into the palace easily and then if desired break away from the group to spend more time at Versailles and simply return by RER train to Paris – the train ticket will be just around €4.

A fun option is a bike tour of the extensive grounds of Versailles including the train from Paris, cycle rental, admission tickets, and time to buy a picnic at the local outdoor market. 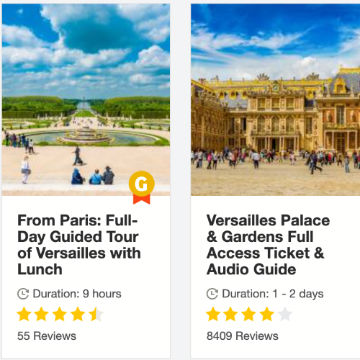 Getting to the Palace of Versailles by Train from Paris

The regional RER trains provide the easiest and fastest transportation from Paris to Versailles. RER trains have fewer stops than the metro (subway) but easy connections are possible between the two systems in central Paris. RER line C5 provides the easiest connections but other options are also available and worth considering especially when traveling from the western parts of Paris. Buying a return ticket cut out queuing time at Versailles later in the day. T+ metro tickets are not valid for travel to Versailles but the Île-de-France IDF tickets required are valid on the metro too.

The simplest way to travel from Paris to the Chateaux de Versailles is by RER line C5 to Versailles-Rive Gauche station (Chateau de Versailles is often added to the station name), which is a mere five-minute stroll to the palace. Line C5 trains have names starting with a V. Avoid lines C7 and C8 that stops at Versailles-Chantiers station, which is far less convenient when heading towards the palace.

The RER line C5 runs through central Paris on the left bank of the Seine with stops at amongst others Champ de Mars – Tour Eiffel, Pont de l’Alma, Invalides, Musée d’Orsay, St-Michel – Notre-Dame, and Gare d’Austerlitz.

Maintenance work on the RER line on weekends should be completed during 2022. (Visiting Versailles during the week is usually a better option anyway.)

NOTE: Maintenance work is continuing on the RER C line in Paris on many weekends, holidays, and late at night. RER trains may not run between Invalides and Musee d’Orsay – it is a 13 minutes walk, or use bus 63 or 69, or try to change to a metro line and transfer to RER C at a station to the west of Invalides. Even during the week, it may sometimes be necessary to change trains at Invalides.

RER line C5 trains run up to four times per hour in around half an hour from central Paris to Versailles. The return fare from central Pairs is around €8 – buy tickets before getting to the platform.

Other Trains from Paris to Versailles

RER Line C5 trains are by far the most convenient trains from Paris to the Chateau de Versailles. It is generally better to avoid trains that stop at stations other than Versailles-Rive Gauche but for travelers traveling especially from the western parts of Paris, including La Defense, it is faster to take a train to Versailles-Chantiers and walk from there rather than to go all the way to central Paris and backtrack just to get onto RER C5.

Versailles-Rive Gauche (Chateau de Versailles) is by far the best choice when traveling from central Paris. Two alternative stations in Versailles worth considering if not traveling from downtown Paris are:

Getting to the Palace of Versailles by Car

Driving from Central Paris to Versailles can be as fast as 30 minutes but generally takes much longer. Follow the Autoroute A13 towards Rouen and use exit 6 (Versailles Centre) – signs point the way to the chateau. Parking (charged) is available in several car parks near the palace.

The taxi fare from Paris to Versailles is around €70 and depends on traffic conditions. Suntransfers gives online quotations for private airport transfers without first requiring personal details or flight numbers – such transfers can be a good idea for small groups especially when traveling directly to / from an airport. For a taxi from the airport to Versailles expect to pay around €100 from Charles de Gaulle and €80 from Paris-Orly.

Versailles is often seen as a good place to pick up or drop off a rental car. Enjoy Paris without a car and then pick up the car here for a less stressful start to the driving part of a French vacation.

See also Versailles Visitors Information and the Paris Museum Pass for more details on opening hours and ticket prices for visiting the Estate of Versailles.

On summer weekends, the seventeenth-century fountains can be seen in action on Grandes Eaux Musicales days.

Admission tickets to Versailles are easily bought online from for example Tiqets and GetYourGuide but individual ticket bearers still have to queue up for security, which is currently fairly strict and slow. Organized group tours use a different entrance for faster admission. At busy times, a group tour makes a lot of sense to get into the palace without waiting — simply abandon the tour afterward and return by train if planning to stay longer inside the palace or gardens.