The UNESCO-listed Gothic cathedral, palace of Jacques Coeur and old town with 400 half-timbered houses are the top sights to see in Bourges in Cher, France Centre. 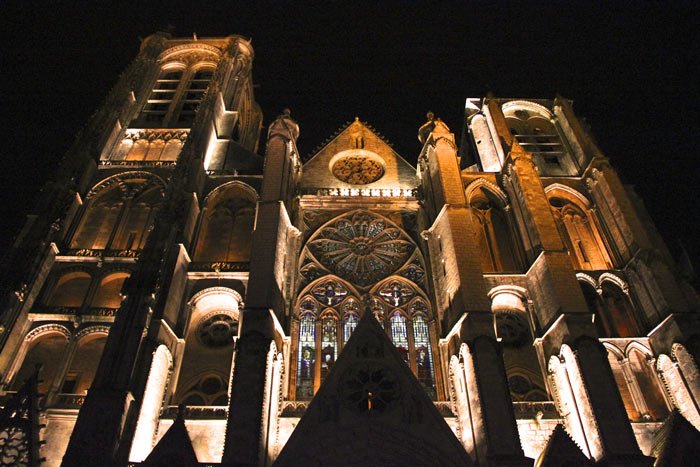 Bourges in the historic province of Berry is one of the most interesting cities to visit in the France Centre region. The town, which was a major economic and political center during the Middle Ages, has more than 400 half-timbered buildings in a lovely old town. The top sights, however, are the magnificent Gothic cathedral – a UNESCO World Cultural Heritage listed site – and the Palais Jacques Coeur – one of the most impressive flamboyant Gothic secular buildings in France. On many summer nights, light and music add a special magic to the beautiful Gothic architecture in the historic old town.

Bourges, capital of the historic duchy and province of Berry, was an important city during the middle ages. The magnificent Gothic cathedral – one of the largest in France – bears testimony to the importance of Bourges during the 13th and 14th centuries as both a commercial and political center. 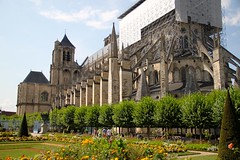 Bourges was already an important settlement in pre-historic times. In 52 BC, after a long siege, Julius Caesar conquered the city and left only 800 inhabitants alive. He allegedly slaughtered 40,000.

Bourges was settled during Roman times but it was at its peak during the 12th to 15th centuries. It was the capital of Berry, the southernmost territory of the Capet dynasty that ruled France. As such, it was often the scene of conflict, including skirmishes with England during the 100 Years War.

Bourges even served as capital of France from 1422 to 1437. Louis XI (the Universal Spider) was born here in 1423 (and later rewarded Bourges with a university). However, the two persons most associated with Berry and Bourges are Jean, Duke of Berry (and brother of King Charles V) and Jacques Coeur, minister of finance for Charles VII. 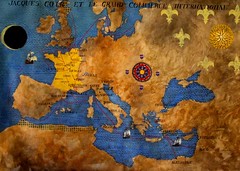 Bourges’ decline came as the result of changing political landscapes – the English were chased out of France and other territories such as Burgundy eventually came under the French crown. As a result, trade routes changed – even today, the main Autoroutes and high-speed rail networks from Paris (and northern France) pass Bourges by in favor of the more direct route via Dijon and Lyon.

Bourges today has a population of just less than 100,000. It is the capital of the département Cher and the region Centre and has important armament and metallurgical industries.

Top Sights to See in Bourges

Bourges has a pretty old town with medieval buildings and walls dating back to the Roman era. Despite a UNESCO-listed Gothic cathedral, one of the most magnificent flamboyant Gothic palaces in France, and over 400 half-timbered buildings, the city is often overlooked by English-speaking travelers.

Bourges is a Michelin Green Guide three-star site and a great stopover when traveling from the Loire region towards Lyon or Burgundy or even further south.

The Cathédrale St Etienne (Cathedral of St Stephan) is the most important sight to see in Bourges. This magnificent Gothic church is one of the largest in France and was added to the UNESCO World Cultural Heritage list in 1992. 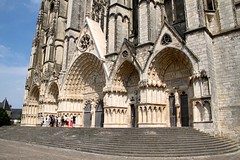 The cathedral in Bourges was mostly built during the 13th century. Work started in 1195 and although the cathedral was consecrated only in 1324 much of the building was already completed and in use decades earlier. The choir, apsis, and ambulatories were completed by 1215 while the nave and parts of the western façade were built between 1225 and 1255.

Bourges cathedral shows conformity in style rarely seen in other Gothic churches of such enormous proportions. Overenthusiastic restoration in the 19 th century added a few incorrect additions, such as round windows and superfluous pinnacles, but overall the Gothic integrity is basically intact and not blemished with later Renaissance or Baroque additions.

The western façade of Bourges cathedral has five portals, which are followed by a nave and double side aisles. The tympanum on the central portal features the typical last judgment with the damned being dragged off to a large boiling caldron.

Subsidence necessitated the erection of the support pillar buttress for the 58-m high south tower, also known as the Deaf Tower as it has no bells. However, it was the north tower that eventually collapsed in 1506. It was rebuilt by 1542 and is known as the Butter Tower, as it was partly financed by indulgence payments in lieu of fasting. (A similar “butter tower” can be seen at Rouen Cathedral). 396 steps lead to a viewing platform 66 m high. 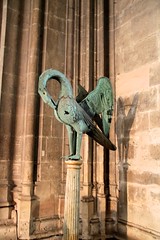 The repeated use of fives in Bourges cathedral is seen as symbolizing the five wounds of Christ, a symbol not that frequently seen in French churches. Completely unique is the use of a pelican on the top of the north tower (an older bronze pelican can be seen in the rear inside the church). In early Christian churches, a pelican was often used as the symbol of the Eucharist. However, almost all churches in France later used the rooster, as symbol of the resurrection. 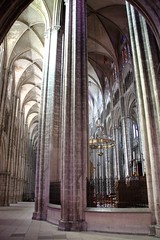 Bourges cathedral is 118 m long and 41 m wide. Inside the church is not surprisingly of huge proportions. The outer aisles are 9 m high, the inner aisles 21 m while the central nave soars to 37 m. The church is without a protruding transept with the two side aisles going over into a double row of ambulatories. 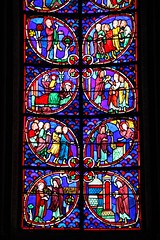 The stained-glass windows are almost all original and date from the 12th to 17th centuries. The windows are considered to be amongst the finest in France with the 13th-century glass in the choir using the same techniques as at Chartres. (Some of the best stained-glass windows in France can be seen in Troyes, another historic town often overlooked by modern travelers and thus pleasantly crowd free.) 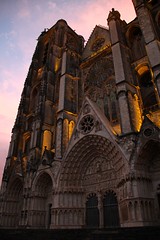 The crypt is unique in that it has windows and is more a lower-level church than a traditional cellar. It has the remains of the tomb of Jean Duc de Berry.

Admission to the church is free but ascending the north tower and crypt is €5.50, free for children under 18 and free for EU residents under 25.

The second top sight to see in Bourges is the Palace of Jacques Coeur, one of the most impressive flamboyant Gothic secular buildings in France. It was built between 1443 and 1451 by local-born Coeur, who became minister of finance for King Charles VII. Following his ennoblement, he built this palace to reflect his newly enhanced status. 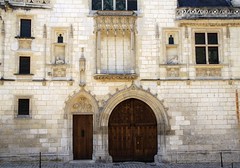 The palace is full of symbols and symbolism – note all the hearts for Coeur and shells for Jacques. The inside of the palace is lightly furnished with only a few exhibits – the lovely flamboyant Gothic architecture is the main attraction.

Highlights to see in the Palais Jacques Coeur include:

Other Sights to See in Bourges 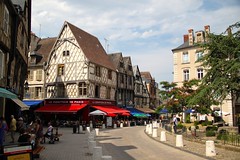 Bourges has a pleasant old town with over 400 half-timbered buildings and many street cafés. It is worth exploring the streets of the old town, which are still very much alive and functioning like any normal town rather than as a tourist attraction. Pharmacies and modern cloth shops work very well in centuries’ old buildings.

All city museums in Bourges are free and with most housed in historic buildings, the architecture can be as interesting as the exhibitions and in some instances even be the main attraction. 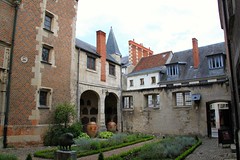 The most interesting of these museums is the Musée du Berry in the Hôtel Cujas. It has an eclectic collection of items related mostly to the history of Berry but also has an Egyptian section with mummies. The Roman section is surprisingly large as is the section on locally produced items. Few items on their own are of particular importance making it a pleasure to simply stroll through and having a closer look at whatever catches the eye. However, don’t miss the items from Sainte Chapelle, which include some of the original mourners from the tomb of the Duc de Berry.

The other city museum are:

Bourges has several pleasant parks – many, even the most formal, have play areas for children. 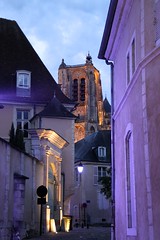 Bourges is a lovely town to explore but at night it can be spectacular. Gothic architecture always provides a perfect canvass for light and shadow shows.

During the warmer nights, Les Nuits Lumière de Bourges project lit up several historic buildings with special lights, laser displays, and accompanying music. From after sunset, a blueish-white lit path guides visitors through the old town to the various sights.

Les Nuits Lumière de Bourges are on every night during July and August and on Thursday, Friday and Saturday nights during May, June and September. 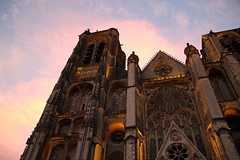 Walking the full route from the cathedral via Hôtel Lallemant, Couvent des Augustins, Hôtel des Eschevins, Palais Jacques Coeur and back takes only around half an hour but expect to spend an hour to 90 minutes to enjoy the music and light shows. 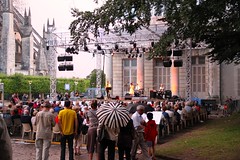 Free concerts are held most nights from June to September in the Bourges summer festival. Ask for details from the tourist information office – the music ranges from classical to rock and free should in no way be interpreted as lacking in quality.

The Bourges Tourist Information office is in Rue Victor Hugo near the cathedral.

Getting to Bourges is easy even though the town’s communication links to other major centers in France is surprisingly limited given the size of the city with no TGV trains currently stopping here. 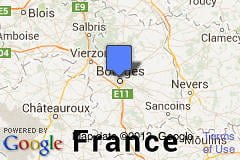 Driving times and distances to Bourges are around:

Bourges is thus a great stopover city when traveling through France.

Bourges can be reached from Paris Austerlitz on direct intercity trains in just less than two hours but the number of trains is limited. Slower trains requiring a transfer can take just over two hours but connections are often not optimal resulting in required traveling times closer to three hours.

French train tickets are available for print at home from the official English websites of French Railways – Voyages SNCF (UK) or RailEurope (USA & Rest of the World).

Hotels in Bourges are also rather limited reflecting that Bourges despite its lovely sights is a bit off the tourist trail. The only four-start hotel in town is the Hotel de Bourbon while the four-star Novotel Bourges outside town near the highways is a pleasant alternative for drivers and families (four-bed rooms and swimming pool). The three-star Best Western Hotel d’Angleterre near the Palais Jacques Coeur is probably the most pleasant option in the old town area. Plenty further business type budget chain hotels are available in the outskirts of town.