Historic Troyes in the Aube en Champagne region of France is famous for its marvelous half-timbered buildings, Gothic churches with stained-glass windows, and outlet malls. 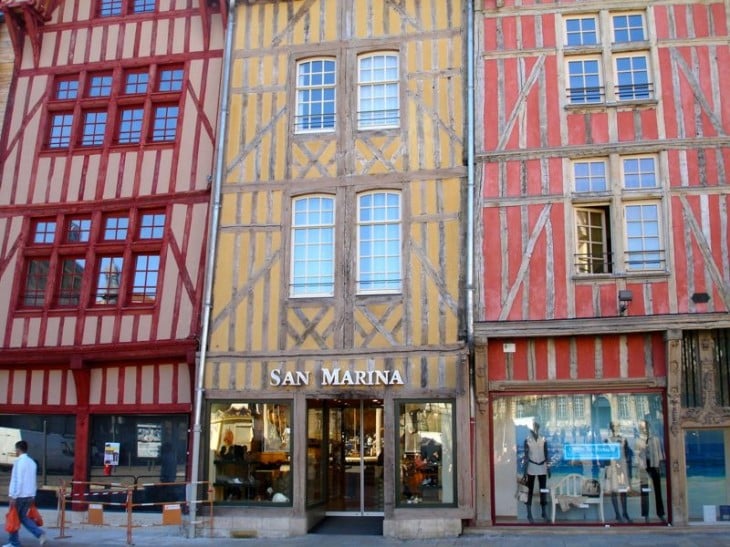 The top sights to see in Troyes include its old town with romantic, narrow alleys lined by half-timbered buildings and Gothic churches with some of the best stained-glass windows in all of France. Troyes was an important commercial town during the Middle Ages as is reflected by the size of its historic houses and the high artistic value of its church windows. In recent years, Troyes has become famous for having some of the largest and best factory outlet shopping malls in France.

The written history of Troyes goes back to the early Roman era with its main shopping street – Rue de la Cité – following the original Roman road from Lyon to Boulogne. However, Troyes was most famous during the Middle Ages when it served as the capital of Champagne.

The old town of Troyes is roughly in the shape of a champagne cork with the outline traced by the location of the former town walls as well as the altered course of the Seine River. The most impressive half-timbered buildings are in the cork’s body, where the rich merchants lived, while the cork head has the cathedral and an important museum. 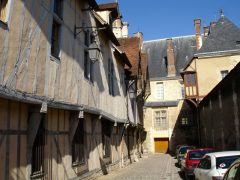 A major town fire in 1524 allowed the richer burghers to rebuild their homes in the more opulent style that provides one of the main attractions of historic Troyes today. The tourist information office has maps with suggested itineraries to guide visitors on walks along the most impressive streets and alleys.

Old town Troyes is still very much a living city with busy commercial activities. It is often necessary to look up, to the higher floors to appreciate the historic half-timbered structures as many buildings are at street level modern stores with state of the art metal and glass shop fronts. 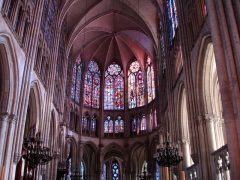 The style of many of the stained-glass windows may remind visitors of Sainte-Chapelle in Paris. However, unlike the famous Gothic church in Paris, on a weekday morning, it is quite possible to be the only visitor marveling at the glass of a Troyes church. No security checks or lining up for hours.

The single-towered Cathédrale St-Pierre-et-St-Paul is mostly Gothic in style and was constructed between the thirteenth and seventeenth centuries. The church is impressively large at just over 110 m (360 ft) in length and 50 m (164 ft) in width but the really outstanding features are the stained-glass windows.

This cathedral in old town Troyes has no less than 1500 m² (16,150 sq ft) of stained-glass windows – some in the chancel and ambulatory dates back to the thirteenth century while the windows in the nave and the rose window in the west are sixteenth century.

Troyes’ Basilica St Urbain is also very impressive. The church is mostly from the thirteenth century but the western façade was only added during the nineteenth century. However, it is once again the incredible stained-glass windows that make this church worth visiting.

Given the impressive historic half-timbered buildings and Gothic churches in old town Troyes, it is surprising, but perhaps also appropriate, that the two best museums in Troyes feature more modern arts and crafts.

Troyes has a busy commercial center in the old town with interesting shops. However, Troyes is famous in France for its factory outlet stores. Some are located in the center of town but most are in the industrial zones in the outskirts of Troyes. The largest, and of most interest to travelers passing by, is the McArthur Glen Outlet Mall which offers huge savings on brand-name clothes.

The Novotel Troyes Aéroport is a family-friendly hotel with swimming pool and rooms sleeping up to four next to the airport, where guests will be lucky to ever see a plane actually arriving. The hotel has good deals and is comfortable for families but sleeping in the center of Troyes is certainly more romantic.