Hildesheim near Hannover in Lower Saxony has some of the best medieval and Renaissance half-timbered buildings in Germany on its Markt (Market Square) and the Brühl area. 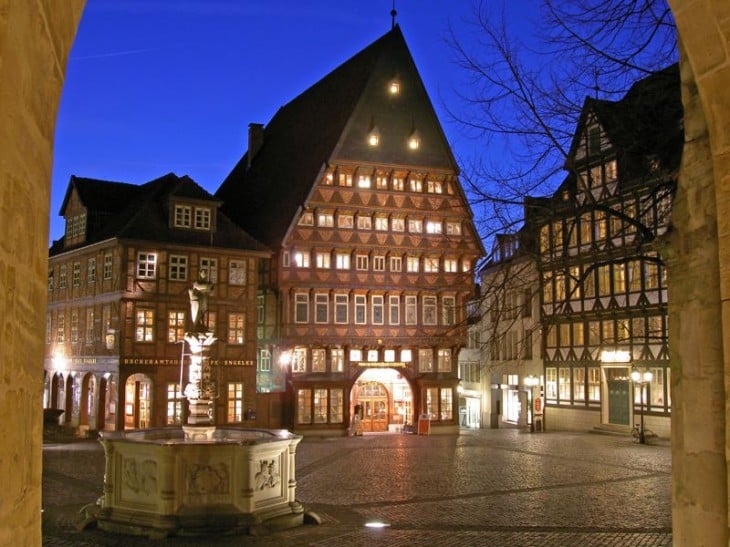 The most impressive half-timbered buildings in Hildesheim are on Markt (Market Square). On March 22, 1945, most of the old town was destroyed or severely damaged following air raids. A few buildings were restored directly after the war but Hildesheim mostly rebuilt modern in a style that is sometimes (and accurately) referred to as post-war hideous. However, by the 1980s Hildesheim Markt was restored to its former glory.

The Knochenhaueramthaus (Butchers’ Guild Hall) on the western side of the Market Square is a faithful reproduction of the 1529 original. This eight-story building with Renaissance decorations is one of the most impressive half-timbered buildings in the world. The Stadtmuseum (Local History Museum) is housed in its upper floors while a restaurant spreads over the lower four floors. .

The adjacent Bäckeramthaus (Bakers’ Guild Hall) is much smaller and originally dates from the mid-fifteenth century. 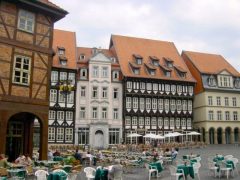 The three half-timbered buildings on the north side of the square are connected behind the three separate façades to form the upmarket Van der Valk Hotel (previously Le Méridien). The oldest façade is the former Wollenwebergildehaus (Weavers’ Guild Hall) from around 1600 while the Rokokohaus (Rococo Building) in the middle is a more recent structure from 1757. The Stadtschänke (City Tavern) is from 1666. 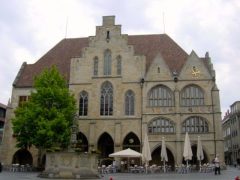 The Gothic Rathaus (Town Hall) was originally erected in 1268 but was altered many times. Following severe damage in 1945, it was rebuilt in a much simpler form. The fountain in front of the Rathaus is a copy of the mid-sixteenth-century original.

The carillon in the Rathaus plays daily at noon, 1, and 5 pm as well as at 9 am on Wednesday and Saturday.

The Tempelhaus (Temple Building) is strangely oriental looking for an early fourteenth-century edifice in central Germany. The step gable and turrets were added in the sixteenth century, as was the lovely Renaissance oriel.

Like the Van Der Valk Hotel on the opposite side of Markt, the local Sparkasse (bank) is housed behind three impressive façades: 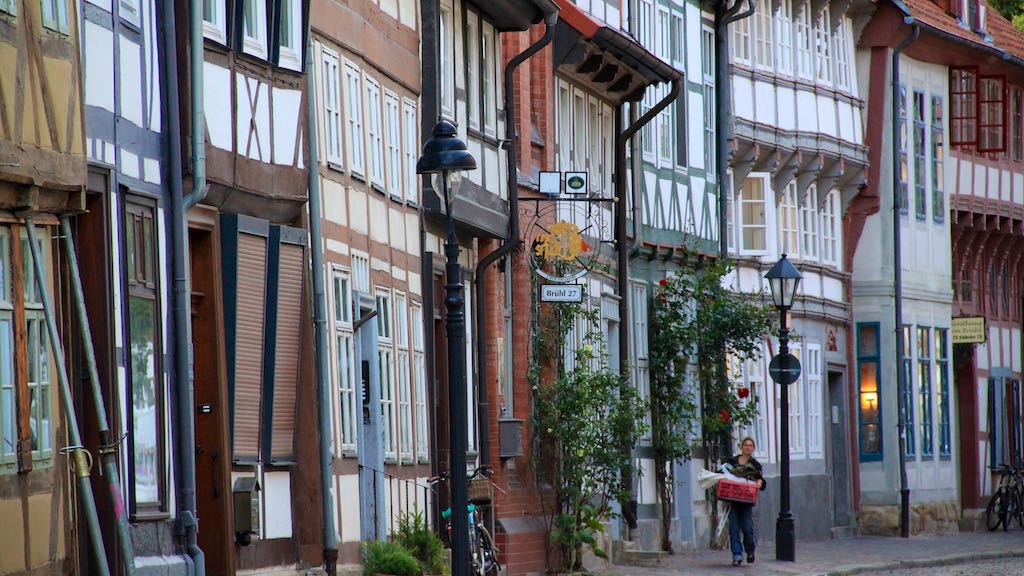 To the south of the old town in the Brühl area are many original half-timbered buildings, which escaped the destructive bombings and fires of 1945. Good examples can be seen in Brühl, Gelber Stern, and Kellerstraße. 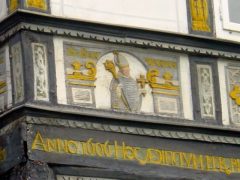 The loveliest is the Wernerhaus built in 1606. It is across from the St Godhardikirche – a rare example of a twelfth-century Romanesque church that kept its original style unaltered inside and out.

Hildesheim’s old town has many other sights worth exploring including the two UNESCO World Cultural Heritage listed Romanesque churches and Egyptian Antiquities in the Roemer-Pelizaeus Museum. Easy transportation links make Hildesheim a pleasant day-trip from Hannover but the town also has pleasant hotels for overnight stays.