Top sights in Hildesheim, Germany include the UNESCO World Cultural Heritage listed Ottonian Romanesque St Michael’s Church, St Mary’s Cathedral (Dom) and bronze doors. Several Ottonian Romanesque churches in and near Hildesheim bear testimony to the political importance of Hildesheim in the early centuries of the Holy Roman Empire of the German Nation. Both the Michaelskirche (St Michael’s Church) and the Mariendom (St Mary’s Cathedral) were inscribed on the UNESCO World Cultural Heritage list in 1985.

Hildesheim’s formal history goes back to the early ninth century but its golden age was around the turn of the first millennium when Bishops Bernward (993-1022) and Godehard (1022-38) erected several Romanesque structures.

The Cathedral in Hildesheim is mostly a mid-eleventh-century Romanesque church with some fourteenth-century Gothic addition. The church was extensively damaged in air raids in 1945 but rebuilt relatively true to the original.

The church has several notable art works. The most impressive is a huge 4.72 m (15 ft) high bronze door from 1015. This Bernward door, named after the famous bishop, is decorated with 16 reliefs with Biblical scenes. (Similar doors can be seen outside the Basilica of San Zeno Maggiore in Verona, Italy.)

From the same era are the Christussäule (Christ’s Pillars) – two columns covered with bronze plates illustrating in a spiral the life of Christ. Also noteworthy is the eleventh-century ring chandelier with space for 72 candles. Only four of these Romanesque chandeliers survived in Germany: two are in Hildesheim, once in Comburg (near Stuttgart) and probably the most famous one – the Barbarossaleuchter –  in the Kaiserdom in Aachen.

Further treasures – the usual collection of vestments, reliquaries, and related works – can be seen in the Dommuseum (entered from the front of the church).

The Thousand-Year-Old Rosebush in Hildesheim 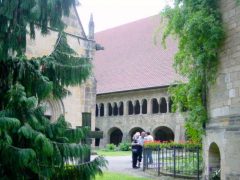 According to legend, in AD 815, Luwdig der Fromme (Louis the Pious), a son of Charlemagne, was hunting in the area when he lost (in some versions forgot in the morning) his personal reliquary. When he search and found it, it was stuck in a rosebush. Unable to remove the reliquary, Louis saw this as a sign from heaven and had a chapel erected. The bishopric followed shortly afterwards.

This so-called thousand-year-old rosebush (it should be approaching 1,200 years by now) can be seen growing against the cathedral choir in the courtyard of the cloisters to the east of the church. This rare example of two-story Renaissance cloisters and the early Gothic Annakapelle (St Anne’s Chapel) inside the courtyard are both original and worth seeing.

The Michaelishügel (Michael’s Hill) in Hildesheim

The Michaelskirche (St Michael’s Church) is a few minutes walk uphill from the Dom. It was constructed between 1010 and 1033 and this relatively short building period ensured the harmonious conformity of the early Romanesque or Ottonian architecture. This basilica has typical chancels on both the west and east sides of the nave as well as the alternate use of two columns for each pillar.

Although the Michaelskirche was severely damaged in 1945, it was rebuilt true to the original. The magnificently painted flat wooden ceiling was removed from the church during the Second World War and is therefore the twelfth-century original. It uses 90 figures to illustrate the family tree of Jesus Christ. 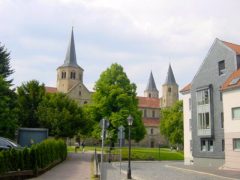 The St Godhardikirche, Godehardsplatz, is to the south of Hildesheim’s old town in the Brühl area where many half-timbered buildings escaped the fires of 1945.

Although less important than the two churches on the UNESCO World Cultural Heritage list, the Godhardikirche is a rare sample of a Romanesque church that maintained its original twelfth-century appearance unaltered.

Hildesheim has several other sights worth seeing including beautiful half-timbered buildings and Egyptian Antiquities in the Roemer-Pelizaeus Museum. Traveling to Hildesheim is fairly easy – the town is just to the south of Hannover with excellent railway connections and pleasant hotels.