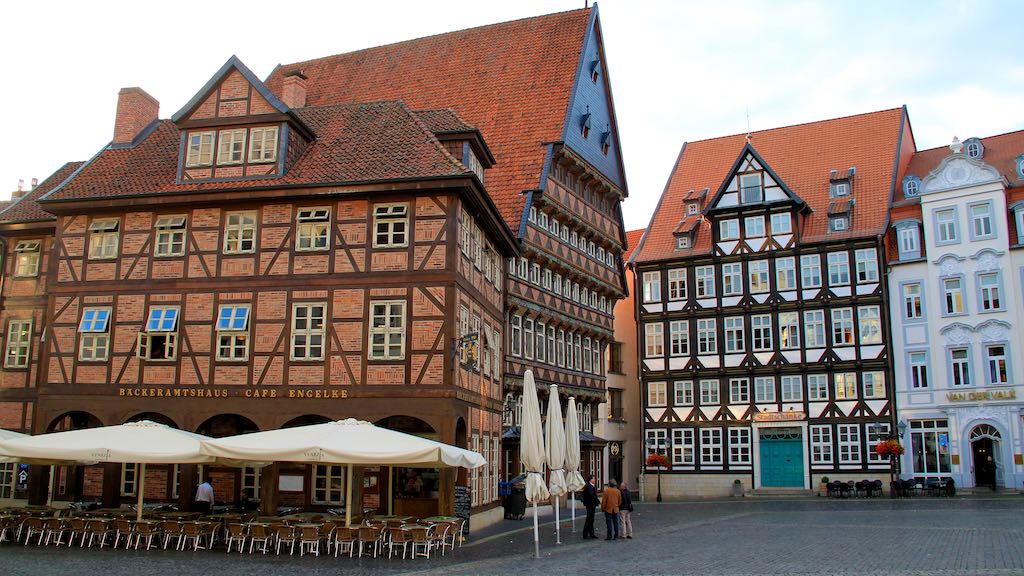 Hildesheim in Central Germany is a pleasant town famous for its two UNESCO World Cultural Heritage listed Romanesque churches and magnificent half-timbered buildings. The town was politically important in the early centuries of the Holy Roman Empire, especially in the tenth century or Ottonian period, but during the later Middle Ages and beyond was politically fairly insignificant.

Hildesheim’s Markt (Market Square) is lined by famously beautiful half-timbered buildings. Most were either destroyed or severely damaged in 1945. Some were restored immediately after the war but it was only in the 1980s that the most impressive buildings in Hildesheim were rebuilt true to the originals.

Half-timbered buildings on the market square include the magnificent eight-storey Renaissance Knochenhaueramtshaus and the older, oriental-looking fourteenth-century Templerhaus.

Views from the Andreaskirche in Hildesheim

Just south of Markt is the Andreaskirche (St Andrew’s Church). It was rebuilt after 1945 to its prewar, fourteenth-century Gothic appearance with some earlier Romanesque elements.

The Andreaskirche has an excellent organ but the main reason to visit is to scale the 114.35-m (378-ft) tower. It is 364 steps to the viewing platform at 75 m (246 ft) with magnificent town and countryside panoramas.

Original Half-Timbered Buildings in the Brühl Area of Hildesheim

Further south is the Brühlviertel (Brühl area), which escaped the devastating bombs and fires of 1945. This area has numerous original half-timbered houses as well as some of the former town defenses including parts of the town wall and the Kehrwiederturm gate-tower.

Also worth seeing is the St Godhardikirche with its clean lines and three towers with slender spires. It is a rare example of an unaltered, twelfth-century Romanesque church. 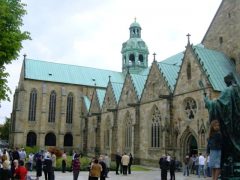 The Mariendom (St Mary’s Cathedral) is a reconstruction of the eleventh-century Romanesque basilica that was severely damaged in 1945. Despite the addition of late Gothic chapels, the overall impression is of typical church architecture from the early Holy Roman Empire. The eleventh-century Bernward bronze doors with relief illustrations of biblical scenes are also part of the UNESCO World Cultural Heritage listing.

Also worth seeing is the original and relatively rare two-story Romanesque cloisters with the early Gothic St Anne Chapel. In the courtyard grows a rosebush reputed to be over a thousand years old.

The UNESCO-Listed Michaeliskirche in Hildesheim 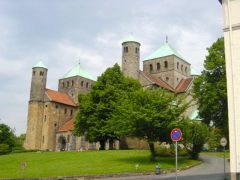 On the nearby Michaelishügel hill is Hildesheim second UNESCO World Cultural Heritage listed Renaissance church, the Michaeliskirche (St Michael’s Church). It is a prime example of Ottonian Romanesque church architecture. The church was mostly destroyed in 1945 but rebuilt true to the original. The twelfth-century painted ceiling is original.