Getting to Walhalla and the German Hall of Fame at Donaustauf in the Danube Valley near Regensburg in Bavaria is easy by car, boat, bus, or bicycle. 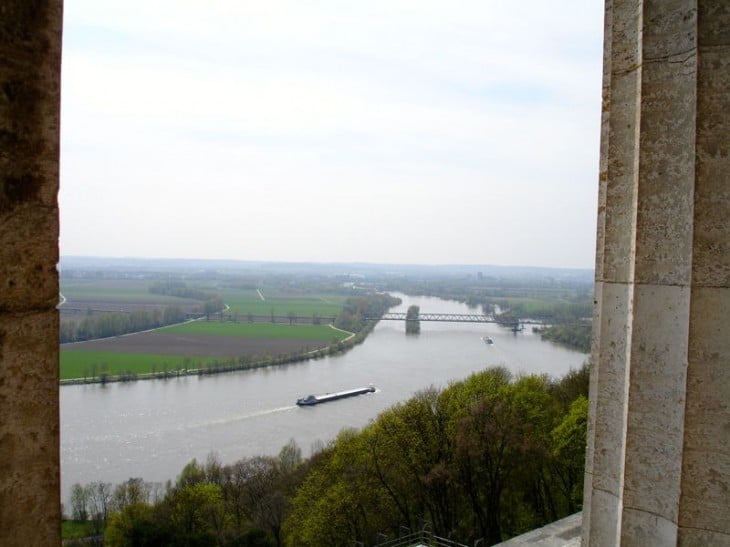 Walhalla – the German Hall of Fame – is in the small town Donaustauf on the northern shore of the Danube River just downstream from the city Regensburg in Eastern Bavaria. This neo-Classical Parthenon-like marble temple can easily be reached by car, bus, boat, or bicycle making Walhalla a great day-trip destination from Regensburg or a pleasant break when driving in the Danube Valley between Passau and Nuremberg (Nürnberg) or Ingolstadt.

Driving to Walhalla at Donaustauf in Bavaria 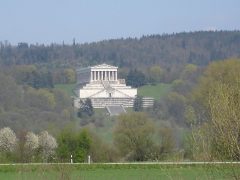 Walhalla towers over the Danube Valley from a small hill on the north bank of the river in the town Donaustauf around 10 km to the east of Regensburg. Parking is available on the hill behind the temple requiring only a short stroll up to the monument – a slightly longer route going around the back of the temple is suitable for wheelchairs and strollers. (EURO-key holders can drive up past the barriers.)

Walhalla can easily be reached by road in around ten minutes from central Regensburg. From Regensburg, simply follow the roads next to the Danube River downstream. If traveling on the Autobahn A3, use exit 102 (Neutraubling). Signposting is clear but Walhalla is visible from far away too.

By Bus to Walhalla from Regensburg 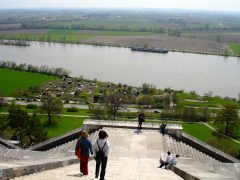 Walhalla can also easily be reached by bus from Regensburg. From Albertstraße – the major bus station near the main train station (Hauptbahnhof) in downtown Regensburg – take bus 5 in the direction of Wörth.

Buses make the trip to Walhalla in just less than half an hour and generally run every 20 minutes but only once per hour on Sundays and national holidays. The bus stop Donaustauf Walhallastraße is at the bottom of the hill.

Boat Excursions to Walhalla from Regensburg

Walhalla is a very popular pleasure boat cruise destination from Regensburg. Cruising down the Danube River to Walhalla is arguably the most romantic way to approach this marble temple.

During the main season – early May to mid-October – up to four round-trip cruises are offered daily from Regensburg to Walhalla. The round-trip cruises take around three hours and include a 75-minute stop at Walhalla. One-way trips are also possible with the downstream cruise taking 45 minutes and upstream to Regensburg an hour.

Boats depart from Regensburg from the south bank of the Danube River just downstream from the Steinerne Brücke (Stone Bridge).

From the boat landing at Donaustauf, it is around 360 steps to the entrance of the German Hall of Fame.

Cycling to Walhalla on the Danube Cycling Route

The Danube Valley is very popular with cyclists. Marked cycling routes run along the banks of most of the river from its source in the Black Forest downstream into Austria and beyond. Walhalla is along the Donauradweg (Danube Cycling Route) and a pleasant cycle from Regensburg

Walhalla is a popular half-day trip from Regensburg although visitors less interested in German political and cultural history may find the UNESCO World Cultural Heritage-listed old town of Regensburg easier to enjoy than the German Hall of Fame.