Walhalla, a neo-Classical Parthenon-like German Hall of Fame in the Danube Valley at Donaustauf, is a popular day-trip and cruise destination from Regensburg in Bavaria. 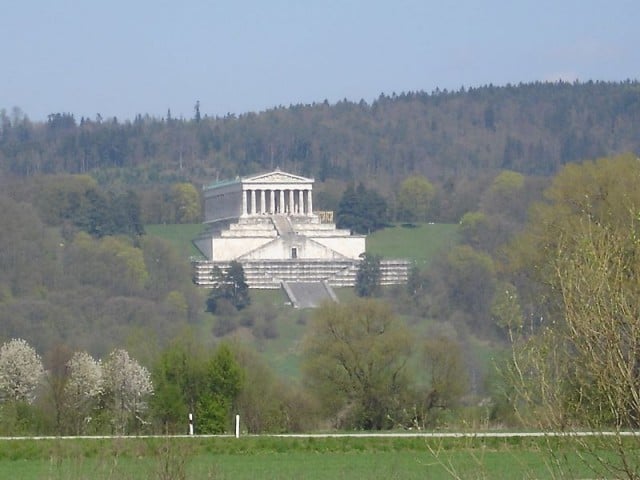 Walhalla in the Bavarian Danube Valley near Regensburg houses the German Hall of Fame. Since the mid-nineteenth century, this neo-Classical white marble temple inspired by the Parthenon in Athens has honored the memory of famous and worthy Germans. Walhalla’s masterful location on a hill overlooking the Danube River is a popular day-trip destination from nearby Regensburg with many travelers taking half-day pleasure cruises down the Danube to this famous marble monument. The views and location are justifiably as popular as the visiting the temple and hall of fame itself.

Walhalla – the German Hall of Fame near Regensburg 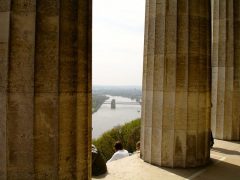 The German Hall of Fame in Walhalla was the brainchild of Bavarian King Ludwig I (reigned 1825-1848). His aim was to honor the memory of noteworthy and worthy Germans from all walks of life and from any part of the world. Ludwig firmly believed that death made all classes equal (but he of course did not support such dangerously revolutionary ideas in the lands he ruled).

Leo von Klenze designed the white marble temple based on the appearance of the Parthenon in Athens. At the center of the temple is the Hall of Fame (Ehrenhalle) where the busts (Büsten) of famous Germans are placed as well as nameplates (Gedenktafeln) of especially early historic and mythical figures.

Inductees in the German Hall of Fame in Walhalla 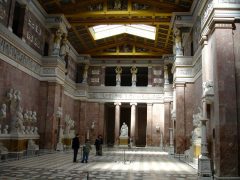 Walhalla was inspired by Valhöll (in English usually Valhalla), the hall of the slain where heroes who had died in battle would join the god Odin according to Norse mythology. However, in the modern Walhalla, inductees need neither be military heroes nor have died in battle.

A wide range of people is honored in the German Hall of Fame. Kings and other nobles are well represented, as are several military leaders. However, many scientists, artists, and poets are also included. Although Ludwig I specifically insisted that women should also be considered, only around a dozen females have ever been included at any given time.

The only true requirement for being considered for inclusion is some connection to the German-speaking world. Thus German speakers from other nationalities are included, as are Germans who had made their contributions to society in non-German-speaking communities.

Busts and Commemorative Tablets in Walhalla 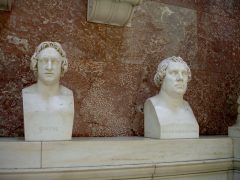 At the opening of Walhalla in 1842, 160 persons were honored in the Hall of Fame through 96 busts and 64 nameplates or tablets. (Nameplates are used for historical figures of unknown appearance including some mythical figures and societies.) Since 1847, the number has been increased to 130 busts and 65 nameplates.

The original statues are arranged chronologically according to the date of death of the person being depicted. Originally, the first statue was that of Heinrich I (876-936) and the final one that of Johann Wolfgang von Goethe (1749-1832), who died just in time to make the initial cutoff date. (Currently, a person must be dead for at least twenty years before being considered for admission.)

Busts added since 1847 are arranged according to the date of admission – thus Martin Luther (1483-1546) for example finds himself next to Goethe. (In Catholic Bavaria, Luther’s admission is probably more for his contribution to the German language than for starting the Reformation.) The most recent (2009) addition is poet Heinrich Heine (1797-1856).

Originally, inductees into the German Hall of Fame were selected by the King of Bavaria. Currently, the building belongs to the Free State of Bavaria and a special committee considers new names. Changes are not made often. Although anyone can suggest a new entrant, exuberant nominations are tempered by the expectation that the nominating person or institution should finance the marble bust if approved.

Most of the site at Walhalla is freely accessible and admission is only charged to enter the main hall of the neo-Classical temple. Visitors not particularly interested in German history and culture may well be satisfied with a general impression of the hall that can be garnered from the open door before the ticket gate. Admission to the hall is €4 (free for under 18s).

The views of the Danube Valley from the monument are for free. Visitors with children should note that the classical lines of the building are not spoilt by safety railings.

Transportation to Walhalla from the UNESCO-listed old town of Regensburg is easy with good bus connections as well as half-day excursions on Danube River pleasure boats. Walhalla is close to the autobahn A3 making it a great stop when traveling in the Danube Valley in Eastern Bavaria between Passau and Nuremberg (Nürnberg).