The best sights to see in Nuremberg are the Imperial Castle (Kaiserburg), top museums, Gothic churches, a wall-enclosed old town, and sights associated with the Nazi party rallies and trials. 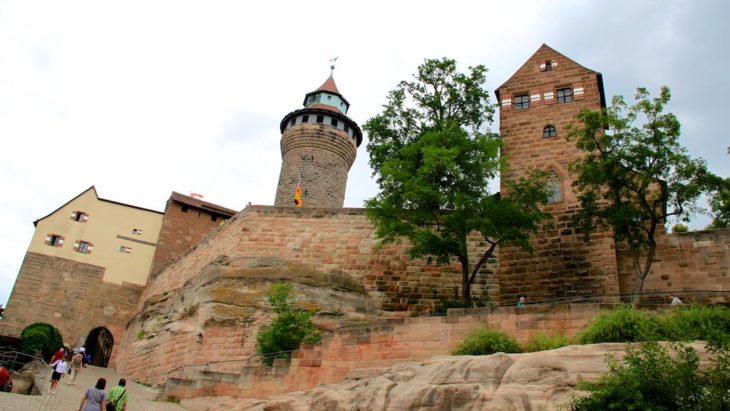 Nuremberg (Nürnberg) was a major power during the Middle Ages and despite extensive damage during the Second World War has many interesting and historical sights worth seeing. Uniquely for a German city of this size, the old town is still encircled by its defensive town wall. The Kaiserburg (Imperial Castle) was central to German power politics for centuries. Several Gothic churches are filled with art while the Albrecht Dürer house is a museum dedicated to the memory of this important German Renaissance artist. The German National Museum has the largest collection of German art and cultural objects in the world. The Nazi Party Rally Grounds have the largest buildings surviving from the Nazi era while the courthouse used in the Nuremberg Trials may also be visited.

Nuremberg is the second largest city in Bavaria and also the unofficial capital of Fraconia (Franken), the cultural rather than formal political or geographical area that includes most of northern Bavaria.

Top Sights in the Old Town of Nuremberg in Franconia

Original medieval town walls still encircle old town Nuremberg. Nuremberg was a major city during the Middle Ages and the large old town required wall of no less than 5 km (3 miles) long. The wall is mostly intact and 71 of the original 130 defensive towers survived to the present.

Nuremberg’s old town is cut into two by the Pegnitz River. The part to the south and closest to the Hauptbahnhof (Main Station) and the German National Museum (Germanische Nationalmuseum) is called Lorenz while the northern section where the Imperial Castle (Kaiserburg) and Albrecht Dürer House are located is known as Sebald.

The impressive Kaiserburg (Imperial Castle), located on a hill in the far northwestern corner of Nuremberg’s old town, is the symbol and defining architectural feature of Nuremberg’s skyline. The Kaiserburg fortress was only used when the Holy Roman Emperor of the German Nation was in town.

Throughout the Middle Ages, Nuremberg so many imperial visits. Between 1050 and 1571, every Holy Roman emperor visited Nuremberg at least once. Over 300 imperial visits took place with Karl IV visiting Nuremberg around 40 times while Ludwig the Bavarian came 70 times. 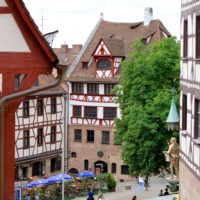 Arguably the best-looking and most romantic square in Nuremberg is the Tiergärtnerplatz. This square is below the castle with medieval surroundings that include the Kaiserburg, town wall, an important town gate, and half-timbered buildings including the house of Albrecht Dürer.

The Albrecht-Dürer-Haus on the Tiergärtnerplatz is a museum in the house where German Renaissance artist Albrecht Dürer worked and lived for most of his life. Somewhat miraculously, the Dürer House survived the air raids of January 2, 1945 when 90% of Nuremberg’s old town was destroyed.

The large Hauptmarkt (Main Market) is the center of all celebrations and markets, including one of the largest and best-known Christmas markets in Germany. The lovely Gothic Schöner Brunnen fountain is a copy of a 14th-century – bits of the original is in the German National Museum.

The Frauenkirche (Church of Our Lady) overlooking Hauptmarkt is a 14th century Gothic hall church. The Männleinlaufen is a mechanical show on the main façade of the Frauenkirche. Daily at noon, seven men representing the Prince Electors come out to pay homage to the Holy Roman Emperor. The symbolism – now of course dated and irrelevant – is probably more impressive than the actual show.

The nearby St Sebalduskirche is architecturally a more interesting church. The exterior of the Sebalduskirche in Nuremberg is an uneasy combination of the Romanesque and Gothic but the interior is much more harmonious.

Tours of the beer cellars and the art bunker, where Nuremberg’s art was hidden during the Second World War, are moderately interesting. The sights above ground are far more interesting.

Top Sights in the Lorenz Area of Nuremberg

The Lorenz Area of Nuremberg houses several museums – see below. Further important sights here include the St Lorenzkirche, a High Gothic church that was mostly rebuilt after 1945. The impressive art in the Lorenzkirche is original.

A medieval-look area was recreated near the tower gate at the Main Station. The Handwerkerhof has arts and craft shops as well as restaurants recalling the lure of yesteryear.

Nürnberg has several major museums of which the German National Museum is by far the most important. The Germanische Nationalmuseum has the largest collection of German art and cultural objects in the world.

The Verkehrsmuseum (Transportation Museum) in Nuremberg is very popular with especially children as it houses the largest collection of historical railway equipment in Germany.

The Neues (New) Museum has an impressive collection of modern art and design objects showing that Nuremberg is not only about the Middle Ages and faded imperial grandeur.

Nuremberg has been a major center of toy manufacturing. The Spielzeugmuseum (Toys Museum) has a large collection of toys. The displays are aimed at adults – no touching please!

Nuremberg played a large role in the history of the Nazi Party and several sights here are worth seeing.

Nuremberg central location in the heart of Germany, and (originally) to a lesser extend its imperial past, made it the location of choice for the infamous Nazi Party rallies of the 1920s and 1930s. Large Nazi-era monumental structures to the south of the old town include:

The Fürth Courthouse Used in the Nuremberg Trials

Probably the internationally most famous event in Nuremberg’s history was the post-Second World War trials of 21 top Nazi leaders. The International Military Tribunal – better known as the Nuremberg Trials – sat in the Nürnberg-Fürth courthouse in Schwurgerichtssaal 600. Fürth can easily be reached by U-Bahn U1.

Nuremberg’s central geographical location played a major role in its history and up to the present ensures excellent transportation links to the rest of Germany and Europe. Cheap flights to Nuremberg are available from many German and European airports as Nürnberg Airport (NUE) is a major hub of German low-cost airline Air Berlin. Nuremberg is also a major railway hub with frequent trains to Frankfurt am Main and Frankfurt International Airport (FRA) taking two hours while Munich (München) is only an hour by train.

See also Top Nazi Party Sights in Nuremberg for more on the sights associated with the Third Reich.

For More on Traveling to Nürnberg See Also: