The Porsche Museum in Stuttgart-Zuffenhausen has an impressive collection of some of the best sports and racings cars ever produced in Germany. 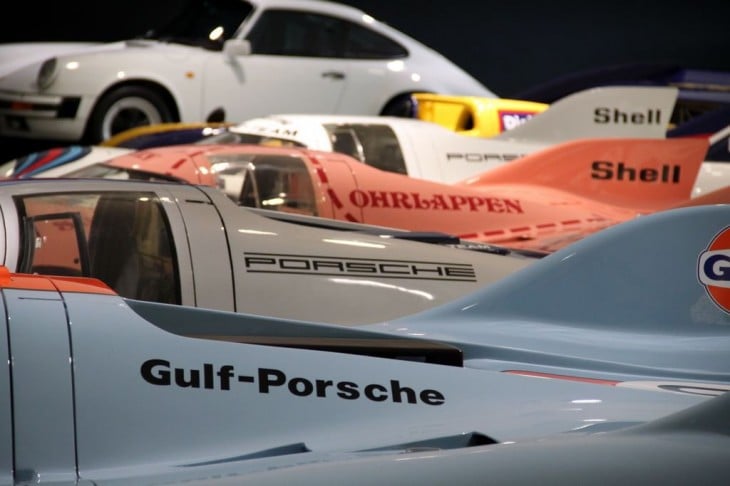 The Porsche Museum displays around a hundred sports and racings cars from the most famous manufacturer of high-performance motor vehicles in Germany. The modern and stylish architecture of the museum building compliments the emphasis Porsche puts on design by providing an excellent gallery space for exhibiting some of the most desirable cars in the world. The Porsche collection includes iconic models such as the first 356, various 911 models, several unbeatable 917 racers, and a couple of design studies. The museum is located to the northwest of Stuttgart next to Porsche’s main factory and head offices.

Iconic Sports Cars in the Porsche Museum in Germany

The Porsche Museum is a very modern, sleek design, very much like the cars themselves. Porsche consciously avoided the “discovery zone” approach and let the cars speak for themselves. With cars as beautiful as these Porsches, this is a sensible approach.

The historic vehicle collection includes several iconic Porsche cars as well as automobiles designed or developed by Porsche for other manufacturers such as the Volkswagen Beetle, Mercedes 500E and, believe it or not, a tractor. Most cars in the museum are originals but a few are copies including the Type 64 (the first “real” Porsche designed in 1939) and the Lohner Porsche Semper Vivus (the world’s first hybrid car developed by Ferdinand Porsche in 1900!).

A large number of Porsche sports cars are on display from the 365 to the latest 911, the 959 tour de force from the 1980s, and some lesser models than many purists never accepted as true Porsches. The 911 was for decades the mainstay of Porsche and can be seen in many versions from the standard production models to special design studies and limited production runs.

Racing Cars in the Porsche Museum in Stuttgart

Porsche has a proud racing car tradition and a trophy cabinet to confirm its success on racing circuits and grueling rally tracks all over the world. Porsche has won more Le Mans 24-hour races than any other manufacturer.

Pride of place amongst the racing cars thus goes to the Porsche 917 racers that dominated the Le Mans and CanAm series during the early 1970s. The 917s were virtually unbeatable and only a change in race regulations brought its run of success to a premature end. It took four decades before another car could beat the race distance covered by the winning Porsche 917 during 1971 Le Mans 24-hour race.

The Porsche 956 is mounted upside down. At its top speed of 321.4 km/h, this racing car produces enough down force to theoretically run on a ceiling.

Opening Hours and Tickets for the Porsche Museum 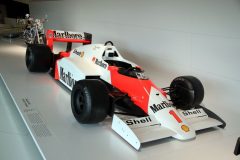 The Porsche Museum is open from Tuesday to Sunday from 9 am to 6 pm. The museum is open on public holidays (including Mondays) and only closes for Christmas and New Year’s.

Admission to the Porsche Museum is €8 for adults and €4 for children and students. Children under 14 enter for free with adults. Children may opt for a special audio guide.

The Porsche Museum is fully accessible for wheelchair users and strollers.

Porsche is very proud of its “museum on wheels” approach – almost all cars on display are in running condition and need little more than an oil change to get back on the road. Visitors may observe mechanics at work in the Porsche Museum workshop on the ground floor.

Transportation to the Porsche Museum in Stuttgart

Getting to Porsche Museum is very easy. The museum is located around 10 km northwest of central Stuttgart in the suburb Zuffenhausen, where Porsche has its head offices and main factories.

Arriving by car is no problem as parking is available in the basement of the museum. The museum is close to the Stuttgart-Zuffenhausen exit on the Autobahn A81 to the west of Stuttgart.

Germany has many car museums with some of the best collections on display at the factory museums of major manufacturers. One of the largest is the Mercedes Benz Museum in the opposite part of town in Stuttgart-Untertürkheim.