The BMW Museum is one of the best car museums in Germany and with BMW Welt at Olympiapark among the most popular top sights to see in Munich (München). 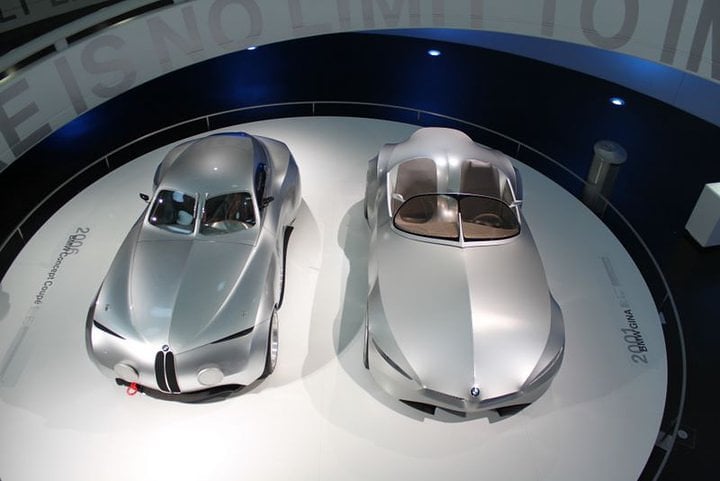 The BMW Museum in Munich (München) is one of the top tourist attractions in the Bavarian capital. The adjacent, free BMW Welt where the latest BMW cars are on display is also very popular with visitors of all ages. The whole area, which includes the Olympiapark in the Olympiagelände where the Olympic Games were staged in 1972, is very family-friendly and easily reached on Munich’s efficient public transportation system.

The German luxury automobile manufacturer BMW has a strong presence in Munich (München) including its famous 1970s four-cylinder head office building and major factories. The iconic BMW Hochhaus (Tower), or Vierzilinder, was completed in the early 1970s and declared a national monument in 1999.

The BMW Museum is partly housed in the still futuristic-looking silver circular building – sometimes referred to as the salad bowl, which is right next to the company head office and was constructed in the same period. The BMW Welt is in the modern building completed in 2008 between the BMW Head Office and the Olympiapark.

BMW was established at the end of the First World War as an aircraft engine supplier. After the war, BMW built mostly motorcycles with car production only starting in 1929. BMW is the acronym for Bayerische Motoren Werke (Bavarian Motor Works). The company’s blue and white emblem was derived from the colors of the Bavarian flag but is often described more poetically as the movement of an aircraft propeller. 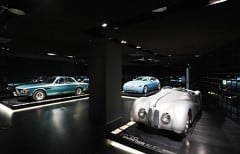 The BMW Museum is typical BMW – very modern, a clean design, and well presented. Exhibits are mostly presented in around 25 themes that include the company history, motorcycles, design, technology, motorsport, and different model lines.

Around 120 BMW cars are on display in the BMW Museum, including iconic models from BMW’s rich history such as an M1, the small Isetta, M5 models, and beautiful design studies. A few interactive displays can keep children busy while true petrol heads will no doubt enjoy listening on headphones to the symphonic sounds of revving famous M Power engines. Aircraft engines, motorsport racing cars, car engines, and motorcycles are also on display.

Temporary exhibitions are housed in the circular building with impressive spiral walkways that remind one of the Guggenheim Museum in New York.

The BMW Welt (BMW World) is the newest building in the BMW complex in the northern suburbs of Munich. It is an ultramodern building that blends in well with the futuristic 1970s architecture of the BMW Head Office and the Munich Olympic Grounds.

The BMW Welt is basically like an enormous BMW dealership with restaurants, a BMW brand, and accessories shop, and several other facilities. It is also possible to take delivery of a new BMW here. In contrast to the nearby BMW Museum, visitors may touch the cars here and it is possible to enter most cars here to fiddle with the buttons (and take photos in the driver’s seat).

Visit the BMW Museum and BMW Welt in Munich

The BMW Museum is open Tuesday to Sunday from 10 am to 6 pm. Admission is a fairly pricey €12 for adults and €6 for children under 18. A family ticket is €24 for two adults and up to three children. Tickets are valid for five hours – tickets must be shown when moving between the temporary and permanent exhibition spaces.

Several savings tickets are available and mostly give a €4 reduction on the adult admission fee, e.g. to holders of the Munich City Tour Card and some combination tickets with the nearby Olympiapark.

The BMW Welt is open daily from 9 am to 6 pm. (BMW clients taking delivery of a new car may usually enter earlier.) Admission to the BMW Welt is free.

Tours of the BMW factory in Munich are possible on weekdays and last around two and a half hours. Reservations for BMW factory tours are essential and usually should be made well in advance.

Transportation to the BMW Museum and BMW Welt

Getting to the BMW Museum and BMW Welt is very easy on Munich’s efficient public transportation network. The simplest option is by U-Bahn train U3, station Olympiazentrum. Olympiazentrum is in fare-zone 2. (U-Bahn line U3 passes through amongst others Odeonsplatz and Marienplatz in the heart of old town Munich.)

BMW Welt is directly in front of the U-Bahn Olympiazentrum exit. Signs will direct visitors to the BMW Museum via the BMW Welt but it is also possible to walk straight to the museum by heading directly in the direction of the BMW Head Office building.

By car, follow the BMW Welt and Olympiapark signs from the Mittlere Ring in the north of Munich. Parking is available in BMW Welt.

Other car museums in Germany of major automobile manufacturers are in Stuttgart (Mercedes Benz and Porsche), Wolfsburg (Volkswagen), and Ingolstadt (Audi) to the north of Munich.