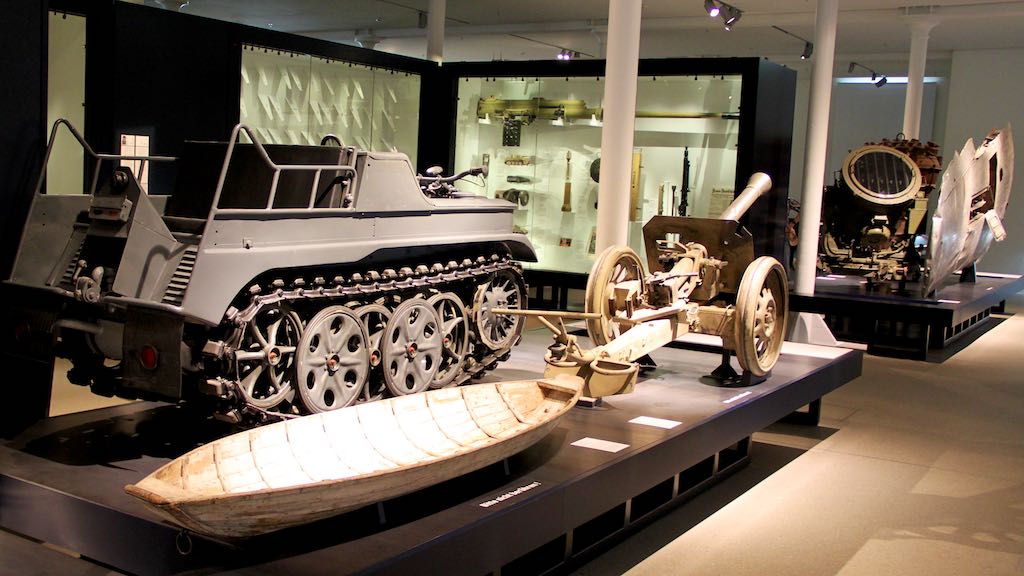 The War Museum (Militärhistorisches Kriegsmuseum) in Dresden offers a very rare glimpse in Germany into warfare, military history, and fighting equipment. The museum shows how the military, armies, and war influenced politics and society, and vice versa. Some of the most famous large items in the museum include a V2 flying bomb, Germany’s first submarine, the Horch cabriolet used by Choltitz and later Charles de Gaulle, and the landing craft that returned the first German in space to earth. 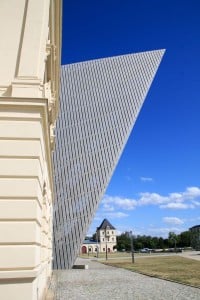 The Militärhistorisches Museum der Bundeswehr – Military History Museum of the Federal (German) Armed Forces in Dresden, Saxony, is often referred to as the Kriegsmuseum or War Museum. This museum is one of very few in Germany that actually has German war equipment from the First and Second World Wars on display.

The museum follows the current standard German approach to controversial historical buildings and issues: get an international star architect to drive a symbolic nail into an existing building to inset new into old and then get on with putting together a modern, very objective display.

In the case of the German Army Military History Museum in Dresden, Daniel Libeskind added a steel and glass wedge in 2011 to an arsenal from 1877. The resulting light and shadows reflect the changing fortunes of the German military history.

Exhibitions in the German Army Museum

The German Army Museum is big. It has an exhibition space of around 10,000 sq m spread over five levels. Around 10,000 items are on display – even a superficial visit easily requires two hours or more.

In addition to the changing temporary exhibitions, the permanent exhibition is divided into three main sections: 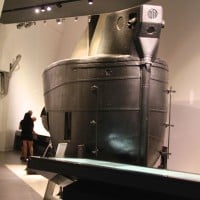 The first hall of the German Military History Museum covers the uncontroversial past – war and armies from the late Middle Ages to the outbreak of the First World War. It has the usual items on display: art, sketches, maps, armor, uniforms, and weaponry. It is a modern museum so ample screens and interactive displays keep visitors of all ages busy. 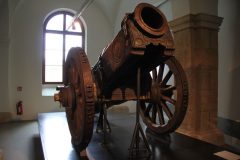 Major focal points of this exhibition include the Thirty Years’ War (1618-48), the rise of Prussia, the Napoleonic Wars, and the unification of Germany. In this period, the divided German states often fought each other (and frequently in coalition with France or other non-German states). It was only in 1870 (and again in the two world wars) that France had to face a united German army.

German history, even German military history, does not start in 1914 (or 1939) and end in 1945. However, this period is of course very important in understanding twentieth century history not only in Germany but worldwide. As a result, this physical display of the world wars period is equal in size to the other two chronological exhibitions. For visitors to the Dresden War Museum, this is fortunate, as few other German museums are prepared to delve as deeply into the military history of this period. 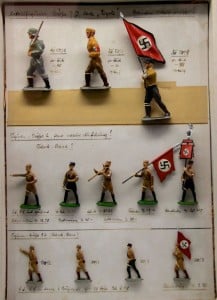 The museum in no way ignore controversial topics such as the holocaust, the racial policies of the Nazis and violence against civilians but these issues are more comprehensively covered in other German museums (especially in Berlin).

German military vehicles and equipment from the Second World War are easier seen in the museums of Allied nations. The Allies removed most of the German army equipment after the war or converted vehicles for civilian use. Even the vehicles and parts of plane on show in this museum were often rediscovered only years after the war had ended. See a few links at the bottom of this page for other museums in Germany with Second World War military equipment on display.

The Modern German Armies – 1955 to the Present

With Germany divided after the Second World War, it was just a matter of time before two German armies would be established: in 1955, the Bundeswehr in the West and the Nationale Volksarmee (People’s Army) in the East.

The museum not only explains in some detail how these armies were formed and functioned but place events in historical context with special emphasis how the West being part of NATO and the East part of the Warsaw Agreement shaped post-war Germany. At its center is the tension of the Cold War period and its influence on armies and society – not only between East and West but also inside German society where anti-war and anti-nuclear armament feelings were often very strong.

The display ends with a united German army (Bundeswehr) after 1990 and finally the return of the German army to active duties outside German and European borders.

An important item from this period is a 1938 Horch Cabriolet 830 BL of General Dietrich von Choltitz, who famously refused Hitler’s direct order to destroy Paris in 1944. Charles de Gaulle utilized this car from the end of the Second World War until becoming President of France in 1959. De Gaulle used the Horch at celebratory events and Choltitz action as a basis to built peaceful relations with Germany after the war.

The thematic displays cover a wide range of topics relating to war and the military. Special exhibitions illustrate how the military and war influenced for example fashion, music, games, toys and language.

As these thematic displays can cover long periods, it is interesting to see how military technology developed through centuries. How the firepower of weapons increased and how defenses responded. The museum has a full three-stories high V-2 flying bomb rocket, many missiles, and bombs on display. 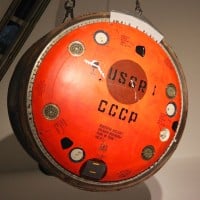 Also impossible to miss is the Soyus 29 landing craft on which Sigmund Jähn, the first German in space, returned to earth in 1978 after a Soviet Union – East German space mission.

The military museum also deals with the physical and psychological suffering caused by war. A very large section is dedicated to war and remembrance. How should war and the fallen be remembered? This was often a problem in Germany after the Second World War. While many German towns have memorials for the fallen of the First World War similar to what can be seen in for example France and Britain, very few have memorials of any kind for the German soldiers that died (3 to 5.5 million depending on who is counting) in the Second World War.

The museum also has a large section on war and toys from early tin toy soldiers to the modern Star Wars Lego toys. Particularly interesting is a model catalogue for ordering Nazi-uniformed toys. A toy tank destroyed in the air raid on Dresden is shown – less than a decade later the same toy tank model range was again on the German market but sans Nazi emblems.

Modern military vehicles from the German armies (both East and West) used mostly during the latter parts of the twentieth century are on display on either side of the museum building. (These may also be seen without an admission ticket.)

The display includes attack vehicles, such as tanks, troop carriers, medical trucks, and most famously a speedboat used by the East German army.

The German Military History Museum is open Thursday to Tuesday from 10 am to 6 pm, Mondays until 9 pm. The Museum is closed on Wednesday.

Tickets for the German Military History Museum in Dresden

Admission tickets are €5 for the permanent collection and €5 for the temporary exhibitions, or €7 for a combination ticket of both on the same day.

Children under 18 enter for free.

Families with two adults and at least one child enter for €7 or €10 combination ticket.

Admission is free for all on Monday after 18:00.

Almost all descriptions in the museum are in both German and English. Audio guides are available while very comprehensive guidebooks are sold in the bookshop, which also has a large selection of books on all aspects of military history.

Transportation to the German Military History Museum in Dresden

The Militärhistorisches Museum der Bundeswehr (MHM), Olbrichtplatz 2, 01099 Dresden, tel +49 (351) 823 -2803 is in Dresden-Neustadt, around 4 km to the north of the Elbe River and the old town center. It is easily reached by car or public transportation. (Limited parking is available at the museum but also possible in the street leading up to the museum entrance.)

The closest public transportation stop is Staufenbergallee – use Straßenbahn (tram) line 7 or 8 from central Dresden. From the airport, use the S-Bahn to Industriegelände and then tram 7 or 8.

Two other sections of the Military History Museum are not in Dresden: 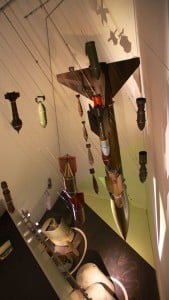 More photos of the Militärhistorisches Museum der Bundeswehr on Flickr.

Vehicles related to the world wars are rarely seen in Germany but a few museums do have some in their permanent exhibitions: