The German Technology Museum with Science Center Spectrum is one of the top sights to see in Berlin – family friendly with fantastic activities and displays. 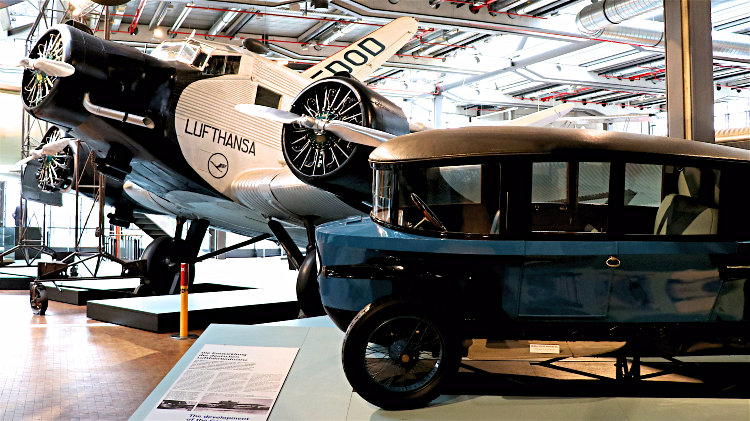 The Deutsches Technikmuseum Berlin with Science Center Spectrum is a huge museum covering the cultural history of technology in large and wide-ranging collections. The main exhibitions are on aerospace, shipping, railways and road transportation with further large displays on the Network, especially the internet, and photography. Further exhibitions cover a wide variety of other technologies including computing, textiles, printing, beer brewing and telecommunications. The Science Center Spectrum adds around 150 hands-on experiments explaining fascinating technology and basic science. In many ways, this may be the easiest large museum in Berlin to enjoy by visitors of all ages. 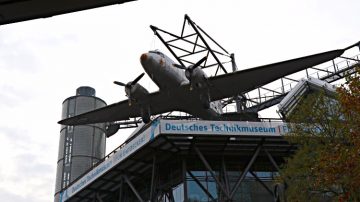 The German Technology Museum is a vast museum complex that covers the cultural history of technology from the earliest human endeavors to the technical complexities of the internet and space age. Displays range from complete airplanes to train tickets, steam engines to the internet. 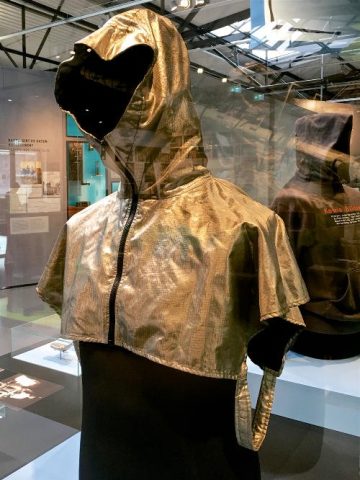 The museum collections are spread over several buildings but may be divided into the main larger themes and several smaller displays.

The main themes and exhibitions in the German Technology Museum:

Smaller – relative to the main themes – exhibitions and their location:

Temporary exhibitions are usually in the Ladestraße complex.

TOP TIP: No one can take the whole museum in on a single visit. Pick a main theme or two and add more areas if time and especially energy allows.

The aviation exhibition in the Deutsches Technikmuseum Berlin is in many ways the most impressive and easiest section in the museum to enjoy. The current permanent exhibition is titled “From Ballooning to the Berlin Airlift“ and thus covers the history of aviation from ballooning in the 18th century to the mid-twentieth century with a few later items from the space age too. Around 40 planes are on display in addition to many further models, engines, and relevant technological displays and explanations.

Visitors will see the Douglas C-47 Skytrain / Rosinenbomber from outside the museum and may take a closer look from the terrace. The Cessna 172 that the 18-year-old Matthias Rust flew undetected through Soviet Union air defenses and landed on Moscow’s Red Square in 1987 hangs above the ticket counter in the entrance hall.

The museum even has a few planes and related items from the Nazi era and Second World War – items that are very rarely seen in Germany. Many of these planes, and parts of planes, were fished from lakes decades after the end of the war, an include for example the remains of a Stuka, a British Lancaster wing, and a flying V1 bomb.

The Schifffahrt und Nautik exhibitions are spread over three floors and with around 1,100 items on display form one of the largest shipping museums in the world. The presentations are grouped in main exhibitions: inland navigation, marine navigation, the theory of shipping, and sports and recreational boating on Berlin’s numerous waterways.

Several boats are on display including a barge from 1840 – its mast reach up to the top floors of the museum, a Prussian towboat from 1901, and many sport and leisure craft.

More than 50 models show the development of shipping from the Stone Age to the present. All these models use the same 1:50 scale so the smallest boat is 10 cm and the largest vessel 7 m. 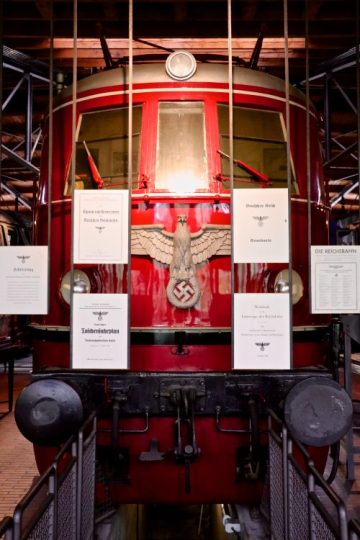 The rail transportation exhibition is mostly on the tracks of the former Anhalter Bahnhof freight station and technical section. Visitors enter through an arch from the legendary Anhalter Bahnhof – one of Berlin’s main pre-war train stations that was demolished after the war, partly due to a divided Germany leaving it without purpose.

The main exhibits are 40 locomotives from the 1842 Beuth (a copy made in 1912 is displayed) to the precursors of the ICE trains. Highlights include the first electric locomotive (1879), the saloon carriage of Kaiser Wilhelm II (1914), trains used in the Second World War, and trains from the two post-war Germanys.

Smaller exhibits include luggage, tickets from all over Europe, model railways, and dining on the railways.

The largest railway museum collection in Germany is the DB Museum in Nuremberg (Nürnberg) in Bavaria with large branch museums in Koblenz and Halle. The largest model railway in the world is Miniatur Wunderland in Hamburg. 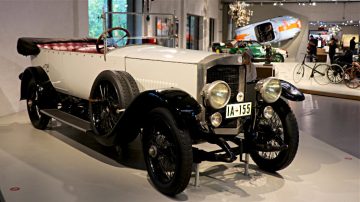 This relatively small display is easily seen on the walk through to the Network exhibition. Three of the more interesting cars are in the “Ingenious dead ends: Back to the Future” section: a 1958 Zündapp Janus where front and rear seats are back-to-back, a 1965 Amphicar and the 1976 NSU Ro 80 twin-rotor Wankel engine car. The Tropfenwagen is seen in the aviation display in the main museum.

A large car temporary car exhibition will show many of the museum’s car collection from 6 December 2017 to 31 July 2018.

The museum’s public transportation depot with 150 vehicles is occasionally open for visits – currently most Sundays in September – when admission is free.

The best automobile museums in Germany are the Deutsches Museum in Munich, the Mercedes Benz Museum in Stuttgart and the Zeithaus Car Museum in Autostadt in Wolfsburg. Few car lovers would regret crossing the Rhine from the Black Forest to see the very impressive French National Motor Museum in Mullhouse, Alsace.

The Network is a new exhibition that shows how the world is connected through people, cables and data streams. The emphasis is on the internet but the exhibition also shows how people network, how networking impact on modern life and of course the actual physical technology behind the internet.

This exhibition is not surprisingly very popular with younger visitors and has many interactive exhibits and computer screens. 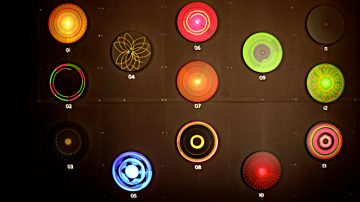 The Science Center Spectrum is spread over several floors of the Ladestraße building and consists of 150 interactive experiments that allow visitors to explore various aspects of science and technology.

Everything is hands-on and some experiments may be enjoyed by small children but teenagers probably get the most out of a visit.

Instructions are clear in German and English and range from simply turning buttons to swinging from ropes to illustrate for example the scientific principle behind movements and gravity.

Experiments are basically grouped in seeing and perception, light and vision, micro cosmos, heat and temperature, electricity and magnetism, force and energy, mechanics and motion, music and sound. It is easy to spend several hours in the Science Center alone (and having fun while learning).

TOP TIP: The Science Center Spectrum is probably best visited around lunchtime when school groups may have left / not yet arrived. It gets busy again after 15:00 when children have free admission. 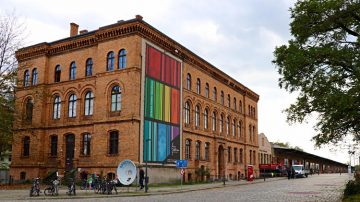 The Deutsches Technikmuseum Berlin with Science Center Spectrum is open Tuesday to Friday from 9:00 to 17:30 and weekends (and most holidays from 10:00 to 18:00).

TOP TIP: Arrive early in the morning with no further fixed arrangements for the day.

Tickets for the Deutsches Technikmuseum Berlin 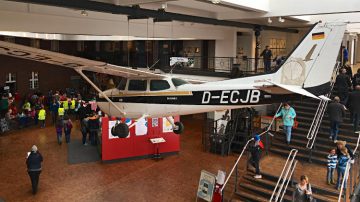 Admission tickets to the Deutsches Technikmuseum Berlin are €8 (€4 for children 6-18) and give admission to all parts of the museum and Science Center Spectrum for the calendar day.

Children under 6 are admitted free while children under 18 may enter for free after 15:00. The Science Center Spectrum is a big draw. 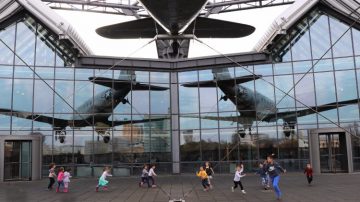 The Museum Pass Berlin is accepted and the Welcome Card gives up to 50% discount.

Small discounts may be given if showing a recent Museum of Natural History ticket.

Demonstrations are frequently held and although most talks are in German, anyone may tag along to see some of the machines in operation. Almost all descriptions in the museum are in both German and English.

TOP TIP: Download the free museum app with audio guide – free wifi available in the museum – as old-fashioned audio guides are no longer rented out.

Eating and Drinking at the Deutsches Technikmuseum Berlin

The Anhalt restaurant in the main building serves lunch and snacks but can get very busy – lunch early or late to get a seat. A smaller café is next to the Science Center.

Picnicking is allowed in the park and in several special dedicated areas inside the museum.


Rick Steves Berlin Guide is a great choice for a first or short visit to Berlin. He does a good job of narrowing the huge city and wealth of attractions down to those generally of most interest to foreign travelers (although he did miss the fantastic Technology Museum!) The guide is easy to read, well organized, full of time and money saving tips with useful walking routes and self-guided tours to some of the top museums and best attractions.

Transportation to the Deutsches Technikmuseum Berlin

The Deutsches Technikmuseum Berlin, Trebbiner Straße 9, 10963 Berlin, is to the southwest of the center of Berlin, just more than a kilometer from Potsdamer Platz. It is easiest reached by train.

Getting to the Deutsches Technikmuseum Berlin is easiest by U Bahn train: use station Gleisdreieck on U1 or U2; or use Möckernbrücke on line U1 of U7.

Alternatives that may work out quicker for some but requiring a longer walk to the museum entrance are S-Bahn station Anhalter Bahnhof, or bus M29 (stop Schönberger Brücke).