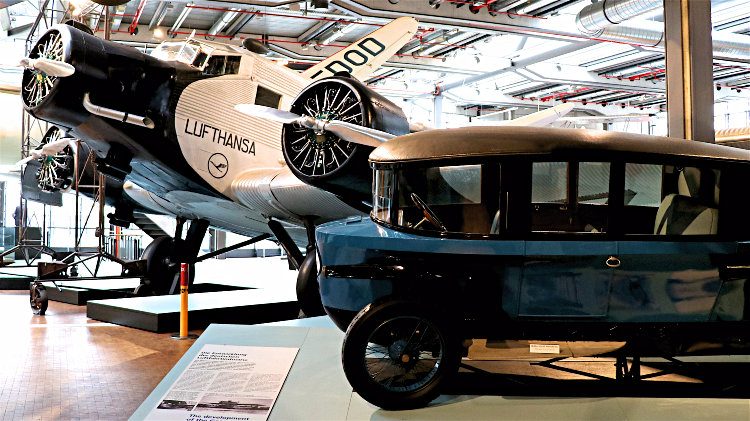 The Junkers Ju 52 – Hans Kirchstein – was used for a few weeks by Lufthansa in 1941 before it was sold off the Spanish airline Iberia. It was in commercial service until 1963.

The plane is restored to its original appearance while the Nazi and Spanish insignia on the tail is painted alternatively through a light projection.

More than 4,800 Ju 52 planes were built, of which 18 survived. The three-engined plane usually carried 3 crew members and 16 passengers.

Following the Peace of Versailles, Germany was not allowed to produce aircraft. Plane engineers such Edmund Rumpker tried their hands at cars. The Rumpler Tropfenwagen (droplet car) had the shape of a falling water drop (when the car is seen from above) but the lack of reliability of the engine and no luggage space did it in. Only around 100 were made. It would be decades before carmakers paid similar attention to the aerodynamics that Rumpler used.