Koblenz is a good departure port for day excursion riverboat sightseeing cruises on the Rhine and Mosel Rivers to see the Loreley, castles and vineyards.

Koblenz, at the confluence of the Rhine and Mosel Rivers, has excellent transportation links making it a great departure port for day-trip riverboat cruises. Several day excursion cruise boat lines operate from Koblenz with KD (Köln-Düsseldorfer) the largest and best-known cruising company. Cruises are possible from Koblenz to the UNESCO-listed Middle Rhine with the Loreley Rock and endless castles or downstream to Remagen, Linz, Bonn and eventually Cologne (Köln). Day-excursions boat cruises are also possible from Koblenz on the Mosel (Moselle) River with Cochem and Moselkern (for Burg Eltz) the most popular destinations.

Special savings deals are available on most lines with discounts for seniors, students, families and on birthdays. Riverboat return tickets are only marginally more expensive than one-way boat fares but trains are a fast one-way transportation alternative when time is limited. 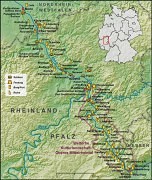 Rhine River day-trip boat cruises from Koblenz are possible in either direction but the UNESCO World Cultural Heritage-listed Middle Rhine with the Loreley Rock and many castles is generally the most popular routing.

The classic Rhine River day cruise is between Koblenz and Rüdesheim – this cruise takes just over six hours upstream but just less than four hours downstream. If time is limited, give preference to the section of the Rhine between St Goar / St Goarhausen and Lorch / Bacharach.

Downriver from Koblenz, cruises usually terminate in Bonn but it is sometimes possible to cruise all the way to Cologne (Köln). The more interesting part of this section of the Rhine is between Linz and Bonn.

Panorama cruises of around an hour is also popular from Koblenz with several departures daily. Local Rhine cruises are also a good option to see some of the castles and sights in the vicinity of Koblenz.

Day-trip excursion riverboats depart in Koblenz from the Konrad Adenauerufer – the bank of the Rhine River just below Deutsches Eck where the Mosel flows into the Rhein. This is around 2 km from Koblenz-Hauptbahnhof or 1.5 km from Koblenz-Stadtmitte – bus 1 is an alternative to walking.

Cruising Times on the Rhine River from Koblenz

Average cruise times to / from Koblenz from a select number of Rhine River towns are:

The order of stops may be reversed for towns, e.g. St Goar and St Goarhausen, which are basically on directly opposing sides of the Rhine.

The Rhine River mostly flows south to north so the left bank (L) and right bank (R) river towns are simply left and right on most maps. Between Koblenz and Mainz no bridges cross the Rhine but car and passenger ferries are available.

Trains offer a very good transportation alternative if time is limited. Trains are more frequent on the left bank between Mainz and Koblenz but even on the right bank trains operate at least hourly.

Train timetables are available online from the English website of German Railways – use the town name with the option KD, if available, for an indication of the distance between the boat landings and the railway stations. (ICE and IC trains are more expensive and often not much faster or over short distances even slower than RE and other regional trains.)

If arriving in Koblenz on a local train use the station Koblenz-Stadtmitte – it is a bit closer to the old town and boat landings than Koblenz-Hauptbahnhof (main station).

See also Transportation to Koblenz for information on the Rhineland-Palatinate ticket that often provide savings on local trains and buses especially when traveling in a small group.

Day-trip riverboat cruise excursions on the Mosel (Moselle in French) are far less common than on the Rhine River. This is unfortunate as the smaller but meandering Mosel River is just as beautiful and at times even more spectacular than the wider Rhine. The use of locks on the Mosel means that up and downriver cruise times are more equal than on the Rhine.

Average cruise times from Koblenz to towns on the Mosel are around:

Mosel River excursion boat cruises are only available during the high season and usually not daily. Mosel cruises are also available from Cochem and much further upriver in Trier with its magnificent Roman monuments.

Currently, Mosel River cruises are operated by KD in cooperation with PPS and Giles.

Boat cruises on the Rhine from Koblenz are generally available from early April to late October. The high season is from mid-April to early October with even more cruises departing on the Rhine during July and August.