Boats cruise on the Rhine River in northern Switzerland and southern Germany from Kreuzlingen on Lake Constance via Stein am Rhein to Schaffhausen near the Rhine waterfalls (Rheinfall). 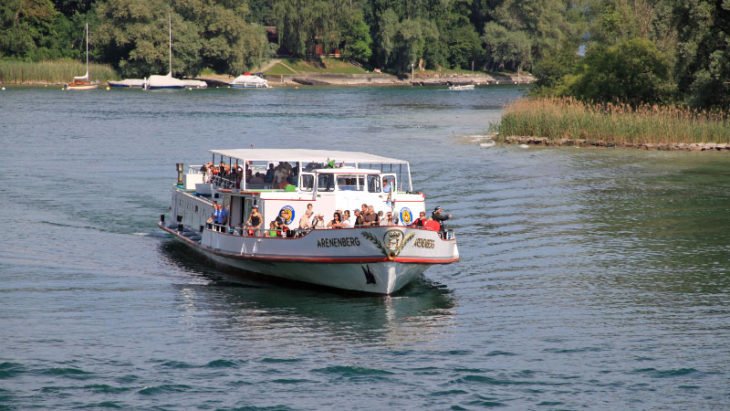 Pleasure boats cruise on the Rhine River between Lake Constance (Bodensee) and Schaffhausen near the Rhine waterfalls (Rheinfall). These popular day-trip excursion cruises connect Kreuzlingen and Schaffhausen with stops en route at amongst others Konstanz, Reichenau Island in the Untersee, and Stein am Rhein. Europe’s largest waterfalls, the Rheinfall, are a short bus or train ride from Schaffhausen.

The most popular part of the Rhine River for day cruises is the Middle Rhine between Rüdesheim and Koblenz, several hundred kilometers downriver from Schaffhausen in western Germany.

Day Cruises on the Rhine and Untersee in Switzerland and Germany 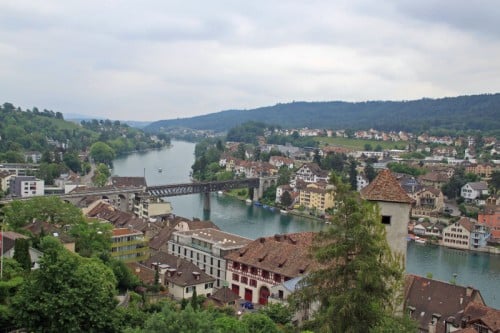 A popular day cruise route on the Rhine River in Switzerland and Germany is from Kreuzlingen on Lake Constance to Schaffhausen. On this excursion boat cruise, passengers travel from Lake Constance (Bodensee) via Konstanz to the Untersee (Lower Lake) with a stop at Reichenau Island before entering the Rhine River itself. Medieval Stein am Rhein and Schaffhausen are the most rewarding stops on this stretch of the cruise with many travelers continuing by bus or train from Schaffhausen to the Rhine waterfalls at Neuhausen am Rheinfall in Switzerland.

The rather clumsily named Schweizerische Schifffahrtgesellschaft Untersee und Rhein (usually abbreviated to URh) operates up to four daily boat cruises in both directions from mid-April to mid-October. The highest number of sailings is during the main season from early July to early September – during the shoulders season, cruises are more limited and occasionally only available on weekends.

Cruising on the Rhine from Kreuzlingen to Schaffhausen

The full Rhine River cruise from Kreuzlingen to Schaffhausen takes around 3h45 while the upstream cruise takes almost five hours. Cruising times between the various stops are as follows: 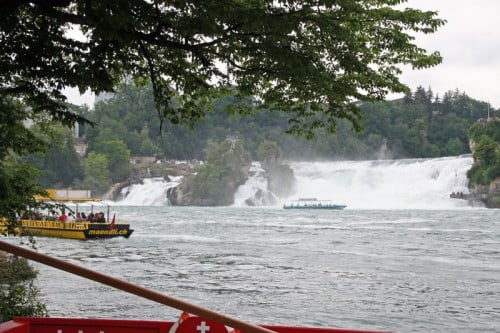 As the boats cross from Switzerland to Germany (D) and back several times during the cruise, customs checks can be made at many stops but very rarely happen in practice. Weather conditions and water levels may make it impossible to halt at smaller stops.

Tickets for the Kreuzlingen to Schaffhausen Rhine River Boat Cruises 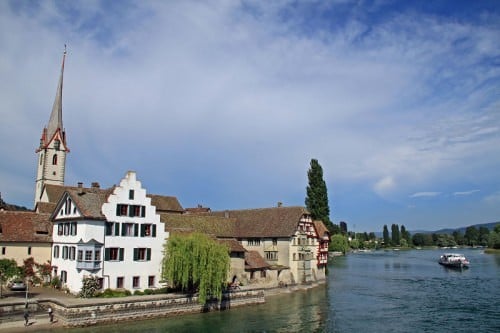 Tickets for the Untersee und Rhein riverboat cruises are available from ticket windows at major stops or directly on board – same price. Prices are quoted in Swiss franc (CHF) but payment is possible in euro. Generally, all Swiss Railways discount cards are accepted.

The full-fare price for a complete one-way cruise from Kreuzlingen to Schaffhausen is CHF50.40, which is a bit of a nonsensical fare as a day ticket valid all day on any URh boats is CHF46 (CHF29 for Swiss Rail’s Half-Fare card holders). Children under 6 cruise for free while 6 to 16 pay half price – the Swiss Junior Card is valid for gratis travel. 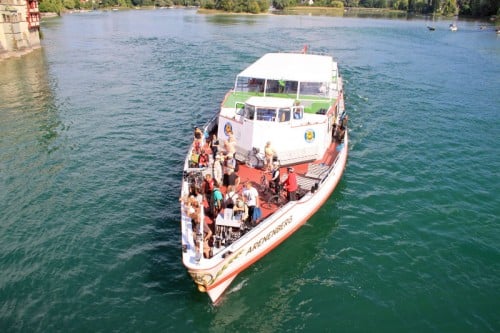 All URh boats are wheelchair accessible but it is not possible to land or board by wheelchair at all stops.

Restaurant service is available on all boats. Seat reservations are only possible for passengers using the restaurants on board.