Lake boats cruise on the Brienzersee between Interlaken Ost and Brienz with wonderful views of the Alps and easy access to many sights. 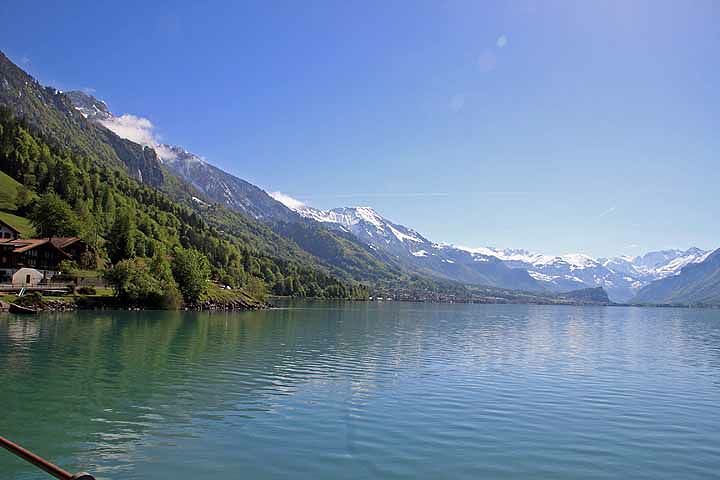 The Brienzersee is a fairly small lake but with marvelous views of the mountains of the Bernese Oberland. Cruises go mostly from Interlaken Ost to Iseltwald (hiking), Giesbach (mountain railway to the waterfalls) and Brienz (Ballenberg Open-Air Museum of Rural Architecture and sights in the Haslital / Meiringen area (Reichenbach Falls, Aare Gorge). 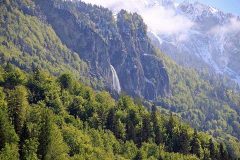 Cruising is possible on Lake Brienz from early April to late October. (Winter cruises are available on the nearby Thunersee up to December.)

During spring (early April to mid May), four round trip cruises from Interlaken Ost to Brienz operate on weekends and vacation days only. On weekdays, cruises are available on the Thunersee.

During summer, two to six return cruises operate daily with the highest number of cruises over weekends and from mid-June to early September.

The pride of the Brienzersee fleet is the historic belle époque paddle steamer SS Lötschberg dating from 1914. During the high season, the steamboat (Dampfschiff) makes two round trips daily with a third cruise at night during most of July and August.

The full fare for the Interlaken Ost to Brienz cruise is CHF30 (CHF51 round trip) in second class and CHF50 (CHF85 return) in first class. See Savings Tips for details of a wide range of savings options.

Scheduled cruises from Interlaken Ost to Brienz take around 1h15. All cruises stop at the ports listed below with a few also calling en route at Ringenberg, Niederried, and Oberried.

Cruise times on Lake Brienz from Interlaken Ost are as follows: 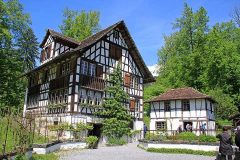 Interlaken is a gateway to many Berner Oberland Alpine destinations and adventures with the town sporting excellent transportation facilities into the mountains an on to Bern (50 minutes by train).

Brienz, on the far east of the lake, is a picturesque small town with transport facilities to popular sights including the Ballenberg Open-Air Museum of Rural Architecture, Haslital, Meiringen with Sherlock Holmes Museum, Reichenbach Waterfalls, the Aareschlucht gorge, and Brienzer Rothorn.

Iseltwald is a popular halfway stop and popular departure point for hiking trips. The hike from here to Giessbach takes around 90 minutes with more challenging walks into the mountains. Giessbach is mostly visited for its waterfall and the grand hotel with spectacular lake views.

Combination tickets are often available for cruising on Lake Brienz and transportation fees and admission tickets to nearby sights.

Dinner cruises, which often require reservations and include the meal in the ticket price, are popular from Interlaken Ost on the Brienzersee. The themes depend on the season and specific day of the week but include amongst others Swiss barbecue, Halal barbecues, and fondue.

Dinner is also served, but optional, on the nightly cruises on the paddle steamboat Lötschberg in July and August. Individual cruise reservations are not possible or necessary for scheduled cruises but seat reservations can be made for meals.

For more on the Brienzersee region, also see: