The Ballenberg open-air museum in Switzerland has more than 100 rural houses in a huge park with farm animals and traditional industry demonstrations. 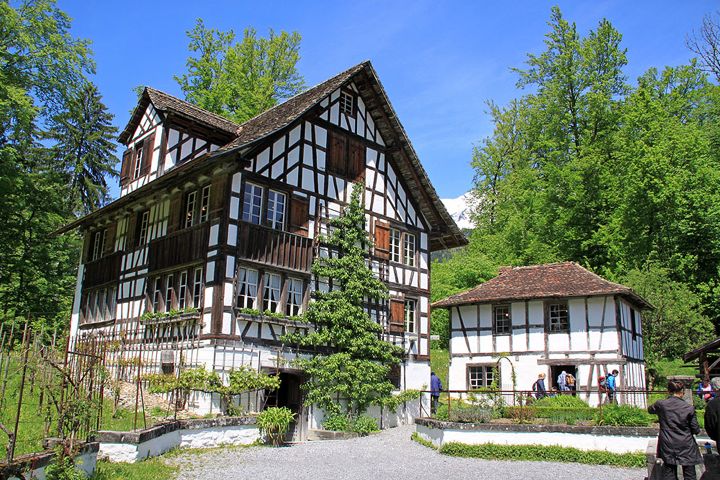 The Ballenberg Freilichtmuseum is a fantastic day-trip destination near Brienz in the Bernese Oberland region of Switzerland. In a 66-hectare park, over a hundred rural Swiss dwellings have been relocated. Many traditional crafts and industries are illustrated and often demonstrated while farm animals are allowed to range free. Visitors may touch many exhibits and active hands-on experiences invite children to learn and enjoy activities and games from the past. Much of the park is accessible to wheelchair users and strollers. Despite several restaurants on-premises, picnicking and even barbecuing are actively encouraged. 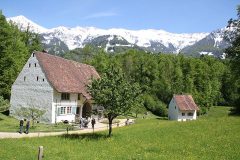 The Ballenberg Open-Air Museum is a growing collection of well over a hundred Swiss rural houses that were moved to this huge, beautiful park near Brienz. The buildings are not replicas or reconstructions but the original historic houses that were moved from all over Switzerland and rebuilt exactly like the original. Visitors may freely explore the interiors of most houses. 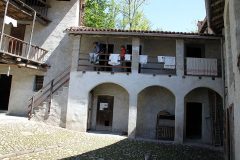 The buildings in the museum park range from residential houses to farmyards with outbuildings, industrial buildings, and even temporary Alpine huts. Buildings are selected for their contribution to Swiss rural architecture and thus range from huge farmhouses to the simple huts of the poor. The oldest house is from 1336 (and one of the oldest wooden structures in Switzerland) while the newest are from the late nineteenth century.

The buildings are grouped in 13 collections according to the region of origin. This makes it easy to compare styles popular in say Ticino with Central Switzerland or the Jura. Being in the Bernese Oberland region the views of mountains from the park are often breathtaking too.

Traditions and Crafts in the Ballenberg Open-Air Museum 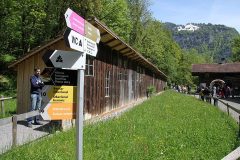 Many traditional industries and crafts are explained in the open-air museum. Visitors are invited to participate in frequent demonstrations range from traditional agricultural activities such as cheese or butter making and beekeeping to more specialized industries such as watchmaking and goldsmith work.

Over 250 farm animals are kept in Ballenberg in traditional ways. Chickens can still range freely all over the farmyard.

Many buildings are functional. Animal and agricultural industries were often combined in one house with the farm owner and workers. Form often follows function. A long building was used to produce long ropes. A lovely beehive from around 1900 resembles a small villa or large dollhouse.

In the “Haus zum Berühren” (House for Touching) children may touch literally everything in sight including many instruments Anglo-Saxon parents seem more anxious to keep out of little hands. Children may also play with a selection of traditional toys. 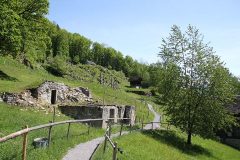 The Ballenberg Open-Air Museum is open daily from mid-April to late October from 10 am to 5 pm.

Admission is CHF20 for adults, CHF10 for children 6 to 16, and CHF45 for families. The Swiss Museum Pass is valid. The map (CHF2) is well worth buying. If arriving by train or bus, enquire at the departing station (or travel agent) about RailAway offers that give savings when combining rail or bus transportation with Ballenberg museum entry. 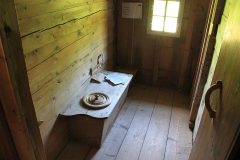 The park and all buildings are far too big to see in a single day. It is best to use the map and just concentrate on a few groupings. The map has suggested routes for visits ranging from an hour to a full day. Also bear in mind that the buildings are original historic buildings – no safety railings have been added or sharp edges rounded. 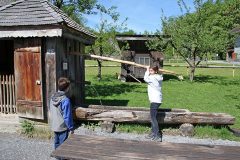 The park has two entrances: the west (Hofstetten / Brienz) and east / Ost (Brienzwiler / Brünigstrasse). Both can be reached by postal bus from Brienz or Brünig train stations. Free parking is available at both entrances. Local trains are available to Brienz and Brünig from Interlaken and Luzern (Lucerne).

For wheelchair users, the western entrance is recommended. Paths here are less steep and more of the buildings are accessible.

The park has several restaurants but locals seem to prefer bringing their own picnic lunches. Barbequing is allowed and free wood is available. (On busy days, experienced visitors send a reservation (occupation?) force ahead to secure a fire.)

Other popular sights in the region include the Sherlock Holmes Museum in Meiringen, the Reichenbach Waterfalls, the Aareschlucht Gorge, and of course pleasure cruises on the Brienzersee to Interlaken West.