Cruise boats on the Thunersee call at stops such as Thun, Oberhofen, Spiez and Interlaken West while passing Alpine landscapes of central Switzerland near Bern.

Lake Thun near Interlaken and Bern is one of the best lakes for enjoying cruise boat excursions in Switzerland. The Thunersee is smaller than other major lakes but still offer plenty of cruises with magnificent views of the Alps while passing small historic cities with Romanesque churches, museums, castles, old town centers, and very pleasant outdoor cafés and restaurants. Pleasure cruises on Lake Thun easily combine with excursions to other sights and activities.

Cruising on Lake Thun in the Berner Oberland 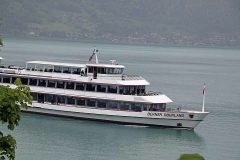 Cruising the full length of Lake Thun from Thun to Interlaken West takes just over two hours. In summer, up to eight return cruises are available daily, with three during the spring, and only one during late autumn.

The historic belle époque paddle steamer Blümlisalp (1906) cruise twice daily between Thun and Interlaken West from mid-May to mid-September. On some mid-summer cruises parents can leave children in a supervise playroom during the lunchtime cruise.

Cruise Routes and Times on the Thunersee 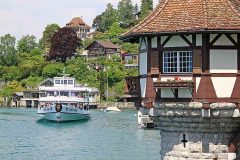 With very few exceptions, the cruise route and times for Thunersee excursion boats are as follows:

Stops and Destinations on Lake Thun

Thun, with its historic old town, church, and castle and Interlaken with its tourist facilities are the obvious main stops on Lake Thun cruise excursions. However, it is worth stopping en route at many smaller towns too.

Spiez is a major destination with a lovely small castle, Romanesque church, a pleasant town center, and a fantastic pool center for sunny summer days. Strolling along the lakeshore from Spiez to Faulensee is probably the most pleasant short walk in the region. 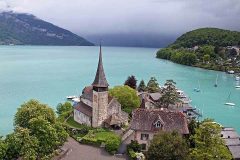 Oberhofen has a picturesque castle with exhibits from the Bern history museum, a large park, lakeside walks, and a museum of moving musical instruments. From Beatenbuch, take a funicular to Beatenberg and from there a cable car to the Niederhorn (1950 m) – returning to Beatenberg (1130 m) by monster scooter (trottinet) is possible from the Vorsass station (1580 m).

The Beatushöhlen is a large cave complex and the home of the mythical dragon that St Beatus killed here. Dragons and images of the saint can be seen frequently in the region.

Special Event and Dinner Cruises on the Thunersee 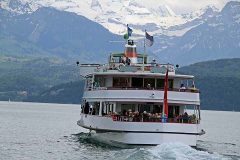 Special event cruises are scheduled throughout the year but particularly plentiful during the summer and over weekends. For special event cruises, discounts are often not available for transportation cardholders. Reservations are possible and even recommended for event and dinner cruises.

Meals are served on most regular scheduled cruises and are charged in addition to the regular cruise fare. Transportation card discount fares are available on these cruises. Reservations for individuals are not possible on regular cruises but table reservations may be made, and during the high season advisable, on any cruise that serves meals.

Continental breakfasts are served on boats departing at 9:40 (and 8:40 in summer) from Thun, except on Sundays and vacation day when a larger brunch is served. Lunch is available on most cruise boats operating around noon. Taking meals are optional on these regular cruises.

Lake Thun is also a popular day-trip destination from Bern. Frequent trains from Bern take only around 20 minutes to Thun or 50 minutes to Interlaken.