Schloss Spiez is an interesting historic castle beautifully located on the shores of the Thunersee near Bern and Interlaken in Switzerland.

Castle Spiez is a small romantic castle with lovely gardens, a fine Romanesque church, and spectacular views of Lake Thun and Alpine peaks of the Berner (Bernese) Oberland region of Switzerland. The castle has a history going back to at least the twelfth century and houses a historical museum with access to a viewing platform at the top of the tower. Admission to the millennium-old church and gardens with panoramic views is free. 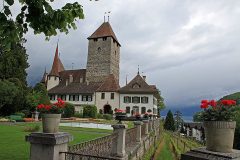 The foundations of Schloss Spiez go partly back to around AD1000 but the tower from the thirteenth century is the oldest visible part of the castle. The Barrons of Strättligen were the first known owners of the castle and resided here from around 1175 until they were forced to sell the castle in 1338.

The Bubbenbergs owned the castle from then until the family died out in 1506. Although often important officials in Bern, the Bubbenbergs owned Spiez (castle, town, and surrounding areas) in their personal capacity making Castle Spiez one of very few castles in Bern and Vaud to never have been owned by the Bernese state. 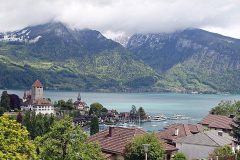 Another prominent Bernese family – Von Erlach – owned the castle from 1516 to 1878. Switzerland’s most important private library was amongst the items auctioned off when the family sold the castle at the end of the nineteenth century. The present appearance of Schloss Spiez is mostly thanks to the building adjustments made by the Von Erlachs to change the castle from a medieval fortress to a more comfortable residential palace. 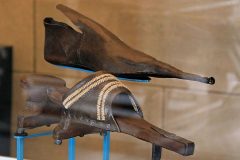 The permanent exhibition in Spiez Castle mostly follows the periods of its three owner families. The Bubenbergs and Erlachs are covered in the more modern north wing while the Strättlingen is in the older keep.

The Bubenberg and Erlachs were prominent Bernese families and often involved in politics, military, and diplomatic matters. Adrian von Bubenberg was one of the Bernese military leaders at the battles of Grandson and Murten (Morat) in 1476, although the huge painting of him returning from the battlefield was only commissioned three centuries after the event. 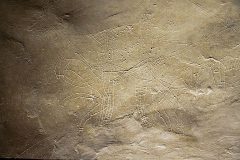 In addition to many interesting exhibits in glass cases, also note the architectural features and different styles including Gothic, Renaissance, and Baroque. The kitchen is from around 1600, the wood paneling of the Renaissance room is slightly newer, while some elements in the banqueting hall hint of the coming baroque.

The oldest part of the castle – the tower – is visited last. Note the graffiti of knights and horses at the tournament scratched into the plaster. These date from the late thirteenth century. The panoramic views of the church, town, Lake Thun, and Alpine peaks from the top of the tower make scaling the steep staircases well worth the effort. 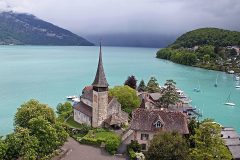 The small, triple-nave church next to Schloss Spiez is one of the oldest buildings in Switzerland. Parts of the crypt and the lower parts of the tower are pre-Romanesque (around AD700) while most of the current church is Lombardian Romanesque from around AD1000. Externally, this is especially clear from the three round apses on the lakeside of the building. 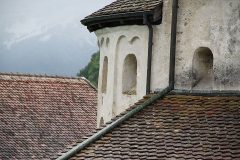 Baroque elements introduced during the seventeenth century were largely removed from the church in 1950. The wall and ceiling paintings are from the middle ages – partly from the twelfth century.

The huge St Christopher painting in the nave is from around 1300 and a common theme in local churches in the region. 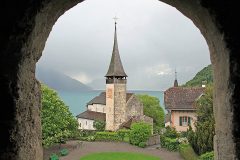 Access to the gardens of the castle is free. Benches and picnic areas are available both in the garden inside the castle complex as well as the more formal garden on the town side of the castle. Next to the castle, Spiez has some of the highest vineyards north of the Alps. The local Spiez wine is mostly a fruity Riesling-Sylvaner. 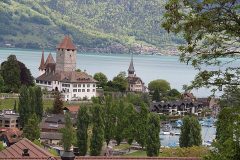 Schloss Spiez is open daily from Easter (Good Friday) to mid-October. Opening hours are Monday afternoons from 2 to 5 pm, and 10 am to 5 pm the rest of the week (closing at 6 pm in July and August).

Admission to Castle Spiez is CHF10 for adults and CHF2 for children (2 to 16). The Swiss Museum Pass is valid.

Admission to the gardens – both inside the walled enclosure and on the terrace outside the main gate – is free. The small Romanesque church can also be visited for free. 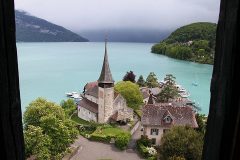 Castle Spiez is conveniently located above the landing jetties of the Thunersee lake boats. Parking is available nearby at the upper levels of the castle grounds. The train station is some distance away but it is a pleasant 15-minute walk – a tourist road train (Spiezer Zügli) sometimes covers the distance too.

Spiez is a popular stop for day excursion pleasure cruises on Lake Thun from Thun or Interlaken West. It is also a pleasant day-trip destination from Bern – around four trains per hour taking less than half an hour.