Schloss Oberhofen is a postcard-perfect historic castle with a toe in the water of the lovely Thunersee near Bern in Switzerland. 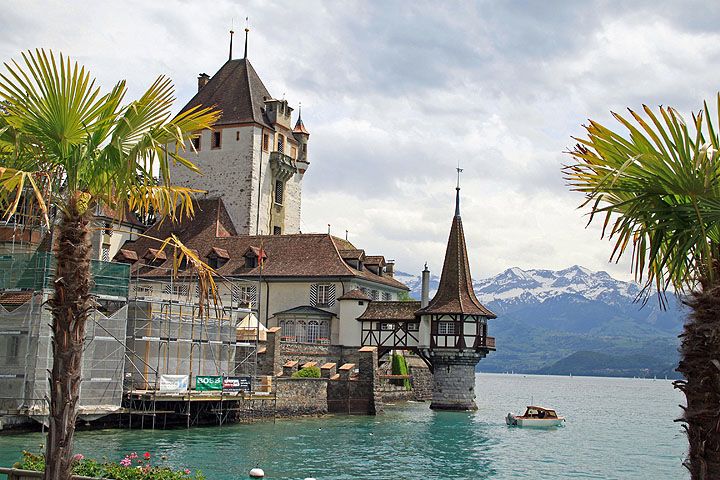 Oberhofen Castle, directly on the shores of Lake Thun, is a popular subject for postcards and tourist brochures advertising the beauty of Switzerland. This historic castle even has a small, much-photographed tower inside the lake itself. The interior houses art and cultural objects of the Bern History Museum while the gardens and park are open for free. Oberhofen is only minutes from Thun and a popular stop for pleasure boats cruising on Lake Thun towards Spiez and Interlaken. 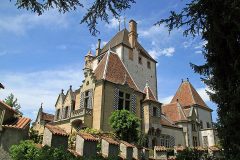 The mighty keep of Schloss Oberhofen dates back to the twelfth century but the main palace and chapel are from the fifteenth century. The picturesque little tower in the lake is even more recent and a typical nineteenth-century addition.

One of the first owners of Schloss Oberhofen was Walther von Eschenbach, who was an accomplice in the murder of the Roman-German King Albrecht the First in 1308. Ironically, the castle soon after ended up in the possession of the Habsburgs just to lose it again after the Battle of Sempach (1386).

Like most other castles in Bern and Vaud, Schloss Oberhofen eventually ended up as the seat of a vogt – a Bernese overlord who governed the region on behalf of the government of canton Bern. In 1801, Oberhofen went private again. From 1844 to 1925, Oberhofen Castle was the summer seat of the Pourtalès family of Neuchatel-Prussian nobility (another oddity of Swiss history), who converted it into its present state, built the delightful little tower in the lake, and planted the park. 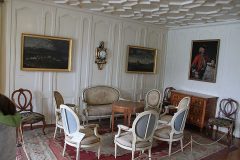 Schloss Oberhofen became a public museum during the 1950s with interiors decorated in the typical styles from the sixteenth to the nineteenth century. The permanent exhibition includes many items from the Bern History Museum and thus is of very high quality. Temporary exhibitions of specialized themes enhance the permanent display.

Different rooms are furnished in styles ranging from the Gothic to Renaissance, the French Empire, Biedermeier, and Gründerzeit. Medieval weaponry features prominently as do many portraits. One sixteenth-century subject is described delightfully honest as “More remembered for his huge body size than the height of his intellect or number of good deeds”! 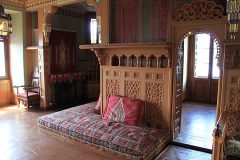 Visitors may enter the little tower in the lake but the library and the Turkish smoking saloon towards the top of the keep are more interesting and give better views of the lake and surrounding mountains.

As a historic, medieval castle, the interior is completely inaccessible to wheelchair users or strollers. 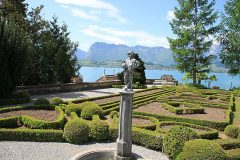 Schloss Oberhofen has a small formal garden inside the castle complex with a larger 2.5-hectare landscaped park adjacent to the castle. Both can be visited for free.

The formal garden gives lovely views of the castle as well as Lake Thun. The larger park is more relaxing but sports a large variety of flora including a surprisingly long plant tunnel parallel to the lakefront.

The park also has a small children’s play area and a memorial dedicated to Sir Winston Churchill. Many benches allow visitors to take a break and enjoy spectacular views of the Thunersee and mountains including the pyramid-shaped Niessen. 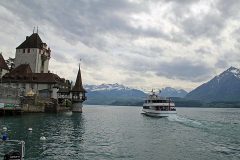 Schloss Oberhofen is open from mid-May to mid-October. It is open Tuesday to Sunday from 11 am to 5 pm, closing at 6 pm in July and August.

Admission to the castle museum is CHF10 for adults and CHF2 for children 6 to 16. The Swiss Museum Pass is valid.

The castle park with lakeside walkway is open daily from early April to late October daily from 9 am to at least 5 pm, closing as late as 9 pm during high summer. Admission is free.

Schloss Oberhofen is 7 km south of Thun on the eastern shores of the Thunersee. The castle is right next to the landing jetty of Lake Thun pleasure boats, making arriving by ship a very good option.

Alternatively, frequent buses between Thun and Interlaken train stations stop in Oberhofen. Parking is more limited near the castle but with a larger, well-marked parking lot a few blocks away near the Museum of Clocks and Mechanical Instruments.

A visit to Schloss Oberhofen combines very well with a lake cruise and visiting Schloss Spiez or other sights in the Thunersee region.

For more on the Lake Thun area, also see: